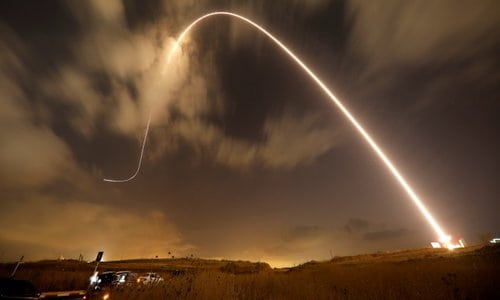 By Benjamin Kerstein/Algemeiner.com January 09, 2020
Share this article:
Israel's Defense Ministry announced on Wednesday that a breakthrough has been made in using laser beams to thwart aerial attacks.
According to Israel's Channel 13, the technological development will enable the long-range targeting and stabilization of laser beams, allowing them to intercept targets at great distances.
Dudi Auster of the Optitronics Department at the Defense Ministry said, "We can finally arrive at an effective laser weapons system that can cut through the iron of rockets and missiles from kilometers away."
The system will be tested as early as the second half of 2020 and will then be deployed near the southern border with the Gaza Strip to complement the Iron Dome.

It was developed by the Defense Ministry in collaboration with Israeli companies Rafael Advanced Defense Systems and Elbit Systems.
The laser system will cost a great deal less per interception than Iron Dome and is capable of intercepting targets as small as drones and as large as precision missiles.
Brig. Gen. Yaniv Rotem, head of research and development at the Defense Ministry's Administration for the Development of Weapons and Technological Infrastructure, said, "We are entering a new era of energy warfare in the air, land and sea."
"R and D investments made in recent years place Israel among the leading countries in the field of powerful lasers," he added. "It will be a force multiplier for the IDF's defense capabilities, whether it is air defense, border protection or the IDF's maneuvering capabilities."

"In the future, we would also like to see it airborne on aircraft and even use it as an offensive weapon," Rotem said.
Defense Minister Naftali Bennett commented, "The Israeli brain continues to lead to breakthrough innovations. The laser project will make our defense system more deadly, powerful, and advanced."
"This is a significant advance in strengthening the security of the State of Israel," he added. "Alongside the existing weapons of war, we have added a laser sword against our enemies in the north and south."
"We are moving forward with great momentum, and the message is clear: Israel has tremendous offensive and defensive capabilities," Bennett said. "Israel's enemies are better off not testing our patience and capabilities."
Originally published at Algemeiner.com - reposted with permission.