The Sanhedrin, The Ten Lost Tribes & Rebuilding The Temple 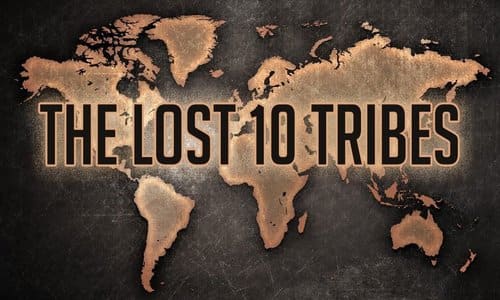 By Adam Eliyahu Berkowitz/Breaking Israel News January 13, 2020
Share this article:
The Sanhedrin, The Ten Lost Tribes & Rebuilding The Temple
In its effort to establish an Organization of 70 Nations, the Sanhedrin reached out to an ethnic group that represents the most likely candidate to be the actual descendants of the 10 tribes of Israel that were taken away in captivity in the eighth century BCE.
TEN LOST TRIBES
The Jews of today are descended from the tribes of Judah and Benjamin. The Kohanim (priestly caste) and Levites, who served in the Temple, did not receive a portion of land in Israel but their identities are preserved by family tradition.

The Bible records that when the Assyrian King Tiglath Pileser III and later Sargon II invaded Israel, ten tribes were taken captive from Gilead and Samaria respectively and resettled in Halah and Gozan on the Khabur River in the Aram-Naharaim region.
In the ninth year of Hoshea, the king of Assyria captured Shomron. He deported the Israelites to Assyria and settled them in Halah, at the [River] Habor, at the River Gozan, and in the towns of Media. II Kings17:6
The Pashtun, an Iranic ethnic group of 50 million Muslims refer to themselves as the "Bani Israel," very similar phonetically to the Hebrew term for the "children of Israel," Bnei Yisrael. With an intricate and strong tribal system, all Pashtun are meticulous about family genealogy (Shijra), but within this tribal framework is a strong oral tradition that they are descended from the Lost Ten Tribes of Israel.
SANHEDRIN MEETS WITH REPRESENTATIVES OF THE PASHTUN
The Sanhedrin was contacted four years ago by a respected academician from Afhanistan who represented a group of Pashtun who wish to reconnect with Israel. The organization represents many influential thinkers and even one former Member of the Parliament of Pakistan. Since there are officially no diplomatic relations between Israel and Afghanistan, this connection had to be built in secrecy and the Afghani Pashtuns have to remain anonymous.
Rabbi Hillel Weiss, the spokesman for the Sanhedrin, traveled to India to meet with representatives of the Afghani Pashtun.
"This meeting and its necessarily oblique format highlight why a formal Sanhedrin has to be established," Rabbi Weiss said. "Relations between Israel and the lost ten tribes, indeed with all the 70 nations, must be carried out within a Torah context. The official Chief Rabbinate does not deal with foreign relations."
Rabbi Weiss explained that much of the discussions between the Sanhedrin and the Pashtun dealt with matters that were not entirely religious. Some issues, such as helping the Pashtun with practical matters where they live and immigration to Israel, will require communication with the Israeli government, something the Sanhedrin is not currently equipped to do.

"It would greatly benefit the Israeli government to help us in our work with the Pashtun," Rabbi Weiss said. "The Pashtun are found throughout the region and could act as a line of communication with Afghanistan and Pakistan and other Muslim nations that currently have no direct relations with Israel."
"We discussed economic and technological cooperation in projects that the Pashtun are currently involved in," Rabbi Weiss said. "Also, the Pashtun are very strongly attached to their traditions and history. Many of the Pashtun expressed a desire in learning Hebrew and the Bible to further this. This is not intended as a first step in converting them. That is not our intention. Our intention is to reconnect them with their past, which they see as Israel."
"It is possible to discuss each issue individually without becoming mired in the overall political and spiritual complexities that may only serve to prevent any dialog. There is a clear and strong connection based on our common past in Israel, ethnic and spiritual. The return to Israel has created similar difficulties in the past concerning Jewish identity and this connection with the Pashtun must be dealt with in kind."
"The status of the Arabs, the sons of Ishmael and one of the 70 nations, also needs a solution and where secular diplomacy has failed, the Sanhedrin is making progress as well."
During his meeting with Rabbi Wess, the representative of the Pashtun signed the charter in which he agreed, as Pashtun, to join with the other nations in helping Israel to bring about the Third Temple. The Organization of 70 Nations will bring together all of the nations under the common belief in the sanctity of the Bible and the sanctity of all of mankind.
It represents a universal covenant of brotherhood of peace based on the Bible all major religions share. Diplomatic representatives from Guatemala, Mexico, El Salvador, and Honduras have already signed the charter.
SIGNS THE PASHTUN ARE TEN TRIBES
Many Pashtun have family traditions identifying with specific tribes. Those from the tribe of Yusufzai, for example, believe they are descended from Joseph, Lewani from Levi, Rebbani from Reuven, Afridi from Ephraim, Gaghai from Gad, and Benyamin from Benjamin.
There is a surprisingly long list of customs among the Pashtun, which are also observed by Jews. Pashtun men wear four-cornered fringed garments that are similar, though not completely identical to, Jewish prayer shawls.
The Pashtun are Muslims and therefore, observe the Sabbath on Friday. Nevertheless, many of the Pashtun light Sabbath candles in their homes on Friday evening like the Jewish world at large, which celebrates the Sabbath from Friday evening until Saturday evening.
Many of the Pashtun wed under a cloth canopy as is customary for Jews. However, while the groom traditionally smashes a glass cup in a Jewish wedding in memory of Temple's destruction, at a Pashtun wedding, the bride breaks the glass. The Pashtun continue to practice Levirate marriage which rabbinic law currently forbids.
The Pashtun also circumcise male infants on the eighth day after birth as Jews do.
Jews and Muslims share many dietary laws including ritual slaughter but some Pashtun have a tradition of covering the blood from the slaughter with sand, as the Jews do. Islam proscribes pork products, but the Pashtun refrain from eating the meat or milk from camels, popular among Muslims of that region. They also refrain from eating crustaceans, a restriction that is unknown among Muslims. More significantly, many Pashtun do not eat milk and meat together.
Although Muslim today, they live by a code called Pashtunwali which greatly resembles Mosaic law. When Pashtunwali conflicts with the Koran, they follow Pashtunwali.

THE PASHTUN MAY BE JEWS
The question of whether Pashtun have intermarried with non-Jews, which would undermine any claim of theirs to having a genetic connection with the rest of the Jewish people, is less problematic than with other nations claiming such a connection. The Pashtun do not intermarry with other Muslims and that marrying outside of their tribe is strongly discouraged.
This connection is actually well-known in Israel. In the late fifties, Israel's second president, Itzhak Ben Zvi, referred to the Pashtun as the exiles from Samaria in his book, 'The Exiled and the Redeemed'.
"The Afghan tribes, among whom the Jews have lived for generations, are Muslims who retain to this day their amazing tradition about their descent from the Ten Tribes. It is an ancient tradition, and one not without some historical plausibility... if the Afghan tribes persistently adhere to the tradition that they were once Hebrews and in course of time embraced Islam, and there is not an alternative tradition also existent among them, they are certainly Jewish."
The Pashtun claim has been strengthened by scientific findings. In 2006, Dr. Navras Jaat Aafreedi, an Indian historian, conducted research at Tel Aviv University into possible Israelite descent among certain Muslim Indian groups.
According to Aafreedi's study, which was published as an e-book, about 650 out of the 1,500 members of the Afridi Pathan clan in Malihabad, India, may possess genetic material shared by nearly 40 percent of Jews worldwide.  If his results are confirmed, it will be the first genetic evidence linking the Afridis Pathan tribe to the Israelites.
The traditions surrounding the Pashtuns being remote descendants of the "Lost Tribes of Israel" is to be distinguished from the historical Jewish community in eastern Afghanistan or northwest Pakistan which flourished from about the 7th to the early 20th century, but which has essentially disappeared due to emigration to Israel since the 1950s.
"They see themselves as part of Israel. This could be a tsunami of Jews or at least support for Israel from a totally unanticipated source. This certainly conforms to prophecy."
Originally published at Breaking Israel News - reposted with permission.