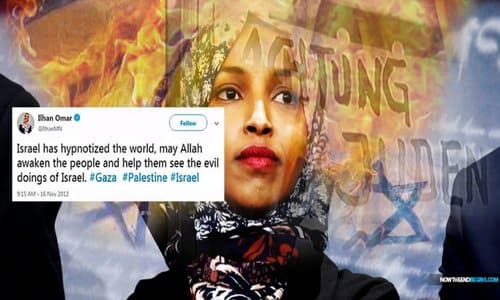 By Jonathan Tobin/JNS.org January 14, 2020
Share this article:
The rising tide of Jew-hatred that is sweeping around the globe is no laughing matter. So the idea of having a vote to determine who is the "Antisemite of the Year" may strike some as more of a publicity stunt than a sober attempt to deal with the problem.
But whatever one may think of such a dubious label or whether it treats the subject with the requisite seriousness, the point of the internet vote in which thousands took part was to call attention to the plague of antisemitism and how it is being legitimized.
More to the point, it turned out that within days of the announcement, the "winner" of the title justified the choice with a statement that helped illustrate the way anti-Zionism is just another form of antisemitism.

The effort was sponsored by StopAntisemitism.org, which also recently published "The New Anti-Semites," an authoritative report on the way the BDS movement is steeped in hatred of Jews, as well as the way its left-wing supporters receive vocal support from the far-right.
And the result of the poll was in keeping with that theme. Though she had steep competition from the Nation of Islam's Louis Farrakhan, Ku Klux Klan leader David Duke, and white supremacist Richard Spencer, the person who received the most votes was Rep. Ilhan Omar (D-MN).
In a year in which armed white supremacists have attacked synagogues killing and wounding Jews at prayer, and in which thugs have turned violent attacks on ultra-Orthodox Jews in the greater New York area a near daily occurrence, does Omar deserve the title?
You can make a good argument that, like the other publicity hounds that make "the Squad" of left-wing members of Congress, especially Reps. Rashida Tlaib (D-MI) and Alexandria Ocasio-Cortez (D-NY), Omar has been given far too much attention by the national press. Yet it's hard to ignore a member of Congress with 1.8 million Twitter followers that spews antisemitic invective about Jews having dual loyalty and buying Congress to support Israel.
Even harder to ignore is that fact that Omar and her allies were, despite their humble status on Capitol Hill as insignificant Congressional freshmen, powerful enough to force House Speaker Nancy Pelosi to back off from efforts to censor Omar for her public antisemitism.

And it can also be asserted that she and her colleagues have helped set the agenda for their party on issues like the Green New Deal, even if most House Democrats remain supportive of Israel rather than backers of BDS, as is the case with Omar and Tlaib.
Still, Omar deserves credit this week for illustrating not merely the hypocrisy of BDS, but how it treats Israel differently from other countries.
Omar was not alone in deploring President Donald Trump's order to have the US military kill Maj. Gen. Qassem Soleimani, the head of Iran's Islamic Revolutionary Guard Corps. The IRGC runs Tehran's activities as the world's leading state sponsor of terrorism, and was responsible not only for torturing and killing Iranians who protested the regime, but also many thousands more in Iraq, Syria, Lebanon, and Yemen.
And, of course, they commanded attacks on Jews and Israelis. Omar also decried the president's announcement that the United States would step up economic sanctions against Iran, which aim to force the rogue regime to give up its nuclear program, and cease its terrorism and illegal missile production.
She tweeted: "This makes no sense. Sanctions are economic warfare."
That's actually true. Restrictions on commerce with Iran are a way, short of an actual shooting war, for the United States to hold the theocratic regime accountable for its behavior. And if you think such tactics are unfair and can, as Omar also asserted, cause hardships for those being sanctioned, then it is possible to argue that the United States should never employ the strategy for fear of causing hardship to the Iranian people.

Omar, however, doesn't oppose all sanctions. She has repeatedly endorsed the BDS movement against Israel. She thinks the one Jewish state on the planet, which happens to be the only democracy in the Middle East, as well as the only nation in the region where all faiths may freely be observed and respected, should be subjected to the same kind of economic warfare.
Contrary to the claims of some of its apologists, the purpose of BDS is not to pressure Israel's government to change its policies. As the founders of the movement and its leading advocates in the United States have repeatedly made clear, its goal is to eliminate Israel.
So if you support BDS against Israel but oppose sanctions against Iran -- a brutal theocracy that oppresses its own people, seeks to impose its brand of Islamist tyranny on others via terrorism, and is dedicated to the goal of destroying Israel -- then you are not merely being hypocritical. Singling out Jews for treatment that you think not even one of the worst governments on earth deserves is a form of bias that is indistinguishable from antisemitism.
While the designation of Omar as "Antisemite of the Year" was ignored by most people, her willingness to oppose sanctions on Iran while advocating them against Israel is something that should cause other House members to shun both the Congresswoman and fellow BDS supporter Tlaib as purveyors of hate. Instead, they continue to be treated as not merely respectable members of Congress, but also lauded by much of the media and pop-culture outlets as minority role models and opinion leaders.
Ilhan Omar may not have committed murder, but by helping to legitimize the kind of double standards and biases that define antisemitism, she is deserving of the same sort of opprobrium dished out to other extremists. The failure of the media to do so is an illustration of how Jew-hatred has sadly become mainstreamed.
Originally published at JNS.org - reposted with permission.