Earth Groaning In Travail - 7 Major Changes Upon Our Earth 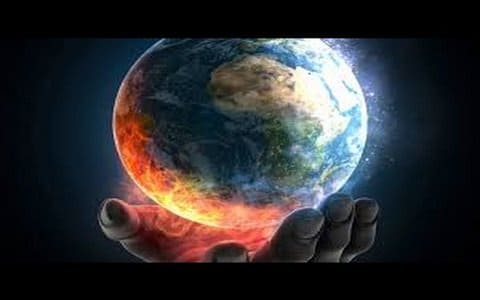 By Michael Snyder/Economic Collapse Blog January 16, 2020
Share this article:
There has never been a time in modern human history when our planet has been changing as rapidly as it is changing right now.
The sun is behaving very strangely, freakishly cold weather is breaking out all over the world, ocean temperatures continue to rise, volcanoes all over the globe are shooting ash miles into the air, Australia is experiencing the worst wildfires that they have ever seen, and the north magnetic pole has been moving at a pace that is deeply alarming scientists.
Could it be possible that all of this bizarre activity is leading up to some sort of a crescendo?
Sadly, most people don't even realize what is happening, and that is because the mainstream media only emphasizes stories that fit with the particular narratives that they are currently pushing.
But it has gotten to the point where nobody can deny that really weird things are happening.  The following are 7 major earth changes that are happening right now that everyone needs to know about...

#1 According to NASA, solar activity has dropped to the lowest level in 200 years.  The following comes from the official NASA website...
The forecast for the next solar cycle says it will be the weakest of the last 200 years. The maximum of this next cycle - measured in terms of sunspot number, a standard measure of solar activity level - could be 30 to 50% lower than the most recent one. The results show that the next cycle will start in 2020 and reach its maximum in 2025.
Of course NASA insists that everything will be just fine, but others are wondering if this lack of solar activity could potentially spawn another "Little Ice Age"...
When solar activity gets really low, it can have the effect of a "mini ice age." The period between 1645 and 1715 was marked by a prolonged sunspot minimum, and this corresponded to a downturn in temperatures in Europe and North America. Named after astronomers Edward Maunder and his wife Annie Russell Maunder, this period became known as the Maunder Minimum. It is also known as "The Little Ice Age."
#2 When solar activity gets very low, it has traditionally meant very cold and very snowy winters, and right now we are seeing snow in places that are extremely unusual...
The Egyptian capital, Cairo, was also turned white at the start of the month, despite the city not having snow in 112 years, and experiencing less than an inch of rain each year.
Many parts of Greece were covered in snow in early January, with low temperatures and strong frost.
The cold front named 'Hephaestion', after an Ancient Greek army general, thrashed the Greek landscape, bringing rain, sleet and ice in the east.
#3 Meanwhile, the oceans of the world just keep getting hotter and hotter.  In fact, ocean temperatures off the California coast have been setting new all-time record highs.  It is odd that this is taking place at a time of such low solar activity, but according to NBC News this is definitely happening...
The world's oceans hit their warmest level in recorded history in 2019, according to a study published Monday that provides more evidence that Earth is warming at an accelerated pace.
The analysis, which also found that ocean temperatures in the last decade have been the warmest on record, shows the impact of human-caused warming on the planet's oceans and suggests that sea-level rise, ocean acidification and extreme weather events could worsen as the oceans continue to absorb so much heat.

#4 There have always been wildfires, but we have never seen anything like this.  During the summer, countless catastrophic fires burned millions upon millions of acres in the Amazon rainforest, and this winter Australia's fires have actually been a total of 46 percent larger than the fires that we witnessed in the Amazon.  Australia has never seen anything like this before, and according to NASA the smoke from these fires will completely circle the Earth...
Once was bad enough, but smoke from Australia's devastating bushfires is set to return to the country to complete a round-the-world trip that has seen it impact on air quality as far away as South America.
By Jan. 8, the smoke had made its way halfway around the world and will make at least one full circuit, according to scientists at NASA, citing satellite tracking data. New Zealand experienced severe air quality issues, while hazy skies and colorful sunsets and sunrises were seen in parts of Chile and Argentina.
#5 During the first half of 2020, volcanoes all over the world have been roaring to life and have been shooting giant clouds of hot ash miles into the sky.  For example, in the Philippines the Taal volcano shot ash nine miles into the air on Sunday, it has also been shooting scorching hot lava half a mile into the air, and the ground around the volcano is starting to crack wide open.
But even after all the devastation that we have already seen, authorities are warning that it could "re-explode at any moment"...
The gray ash is knee-deep. It covers the homes, the bloated cadavers of cows and horses, their limbs protruding at unnatural angles in the shadow of a sulking volcano that could re-explode at any moment.
"My home is now gone," said Melvin Mendoza, 39, a boatman who returned on Tuesday to Taal, the volcanic island in the middle of a freshwater lake just 40 miles south of Manila, which erupted on Sunday like an atomic bomb mushroom cloud.
Let us hope that this volcanic activity does not spread throughout that general area, because the largest super volcano caldera in the entire world has been discovered not too far from the Philippines...
A team including members from GNS Science have identified an ancient mega-volcano that could have the largest known caldera on Earth.
The 150km (93.2 miles) wide feature is on the crest of Benham Rise, an oceanic plateau off the Philippines coast. In comparison, the caldera at Taupō is about 35km (21.8 miles) wide, and that at Yellowstone about 60km (37.3 miles).

#6 All of this is taking place while the north magnetic pole is moving toward Russia at a very rapid pace.  The following comes from CNN...
The north magnetic pole has been slowly moving across the Canadian Arctic toward Russia since 1831, but its swift pace toward Siberia in recent years at a rate of around 34 miles per year has forced scientists to update the World Magnetic Model -- used by civilian navigation systems, the North Atlantic Treaty Organization, and US and British militaries -- a year ahead of schedule.
#7 On top of everything else, the Earth's magnetic field has been steadily weakening over time, and this has some experts extremely concerned...
In a forum on Quora, science fiction writer and journalist C Stuart Hardwick revealed that satellite data, such as those collected by the European Space Agency's SWARM mission, revealed that the magnetic field has been weakening for about 5 percent each century.
He noted that currently, the strength of the magnetic field is at 29.5 microteslas, which is 14 percent weaker than its previous state three centuries ago. According to Hardwick, the SWARM satellites detected increased deterioration within regions of the magnetic field over North America. He said these regions weakened by about 3.5 percent over the span of just three years.
Without our magnetic field, life on Earth could not exist for long.
And it doesn't have to disappear completely to be a massive problem.  If it simply gets weak enough, dwelling on the surface is going to become exceedingly difficult.
As I keep warning, our planet is becoming increasing unstable, and what we have experienced so far is just the beginning.
The demands of life can often cause us to focus on things that don't really matter.  Hopefully we can get more people to wake up while there is still time, because the clock is ticking for humanity and for our planet as a whole.
Originally published at the Economic Collapse Blog - reposted with permission.