The Rise Of Gog? Putin Positions Himself To Influence Russia For Life 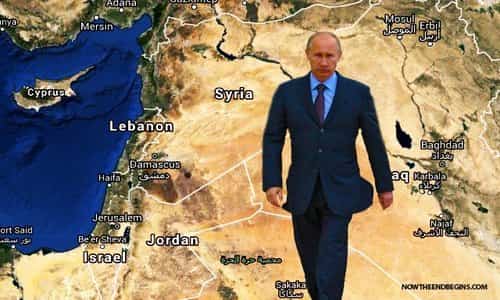 By Aaron Kesel/Activist Post January 17, 2020
Share this article:
The entire Russian government led by former Russian Prime Minister Dmitry Medvedev resigned after Russian President Vladimir Putin gave a speech on constitutional reform, Reuters reported. Medvedev said, this was "to give President Vladimir Putin room to carry out the changes he wants to make to the constitution."
Medvedev stated the constitutional reforms presented by Putin would make significant changes to the country's balance of power and so "the government in its current form has resigned".
"All further decisions will be taken by the president," Medvedev added.
The announcement came during Putin's annual state of the nation address during which he proposed changes to the Russian constitution that would give Parliament a more powerful role.

The changes Putin proposed to the Russian constitution will give more authority to parliament, including the power to choose the prime minister and senior cabinet members, instead of the president as under the current system.
Further changes include enhancing the role of regional governors, tightening the residency requirements for presidential candidates and other top officials, and giving the Federation Council, Russia's upper chamber, powers over the appointment of security officials.
"Today in our society there is a clear demand for change," Putin said during his address. "People want development, they are striving to move forward in their careers, in their education, in becoming prosperous."
The package of reforms will be presented as a national vote, Putin added, without specifying when that vote will occur.
"I consider it necessary to conduct a vote by the country's citizens on an entire package of proposed amendments to the country's constitution," Putin said.
"We will be able to build a strong prosperous Russia only on the basis of respect for public opinion," Putin added.

The move is intended according to many for Putin to retain power after the end of his presidency in 2024.
"It's not clear what role he will play, what will his status be. The only thing which is clear is that he will keep his role as the No. 1 person," Alexey Chesnakov, a political analyst who previously served as a Kremlin aide, told The Wall Street Journal.
There has been long speculation about potential changes to Russia's political system that would allow Putin to stay on after 2024, when he is currently required to step down.
However, that might not be the case anymore with reform leading many to believe this is a way for Putin to continue ruling Russia after his fourth Kremlin term, perhaps as a behind-the-scenes role.
This could make Putin Russia's President or shadow leader for life (or at least until he dies).
The former KGB operative has been in power for more than 20 years, longer than any other Russian or Soviet leader since Josef Stalin, who led from 1924 until his death in 1953.
Originally published at Activist Post - reposted with permission.