Amazon's Pay By Hand - Fast Tracking The Mark Of The Beast 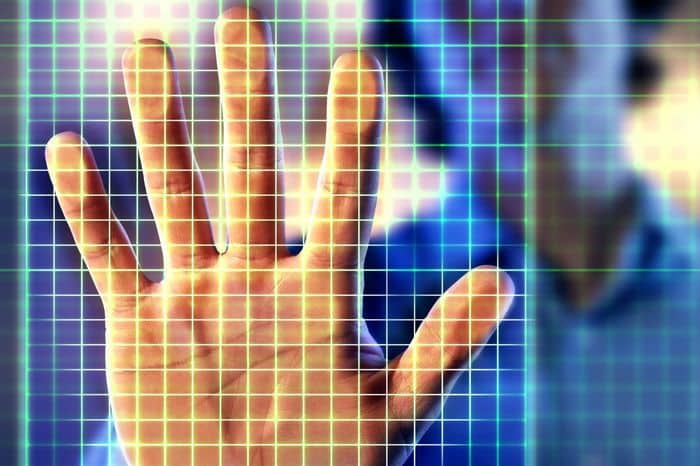 By PNW Staff January 20, 2020
Share this article:
If anyone has the power, money and influence to persuade people to accept a new form of payment systems for commerce, it is Amazon.
Amazon is in the early stages of developing a technology that essentially turns your hand into a credit card.  It is likely to tie in with it's previously filed patent that includes a  "non-contact biometric identification system" that features a "hand scanner" to produce a picture of a person's palm.
The company is already working with Visa on testing out terminals which would be placed in brick-and-mortar stores and allow shoppers to link their card information to their hands. They could then pay for purchases with their palms, without having to pull out a card or phone.

The company plans to first pitch the terminals to coffee shops, fast-food restaurants and other merchants that do lots of repeat business with their customers.
Mastercard, JPMorgan Chase, Wells Fargo and Synchrony Financial have also expressed interest in working with Amazon on the new technology.  Mastercard coincidentally just certified the first contactless biometric payment card from Thales Group that uses fingerprints. The certification is a key milestone for the introduction of biometric cards to a larger market and serve major banks demands for commercial roll outs in 2020.
It is expected that 2020 will be an important year in the adoption of biometric payments as technology, banking and big business merge many applications for larger consumer acceptance.
Until recently most of the technology buzz has been around putting actual microchip inserts under the skin. Recently the  the World Mobile Congress in Barcelona showcased a man who volunteered to to have a chip inserted under his skin, and another showed off how to make payments using his chip insert.
One of the volunteers, Edgar Pons said he decided to have an RFID chip implanted under his skin because it contained credentials to open the door to his house.
Reuters quoted him, saying; "It is super, for me, very useful, because I have an automatic house."
As Pons was undergoing the procedure, Alex Rodriguez Vitello, a physicist, engineer, curator and explorer at Barcelona-based technology company Alpha, said;
"The chip is the size of a grain of sand or two and it's covered in a material that is biocompatible so our body doesn't degrade it over time."
During the presentation-- organized by Spanish bank Sabadell, a man named Pau who had already been fitted with a chip, made a payment by placing his smartphone over the skin covering the chip.
"What we have been seeing now is what the future of payments could be," said Anna Puigoriol, a financial services manager at Sabadell.
This chip implant is the same technology that allows you to use Apple Pay or Samsung Pay at more technologically inclined outlets today. Banks are considering its deployment but are proceeding cautiously due to privacy and tech concerns.

At one time, the idea that large numbers of people would willingly allow themselves to have microchips implanted into their hands seemed a bit crazy, but now it has become a reality.
Thousands of tech enthusiasts all across Europe have already had microchips implanted, and now a Swedish company is working with very large global employers to implement this on the corporate level.
In fact, Biohax recently told one of the biggest newspapers in the UK that they have been talking with a "major financial services firm" that has  "hundreds of thousands of employees"...
Biohax, a Swedish company that provides human chip implants, told the Telegraph it was in talks with a number of UK legal and financial firms to implant staff with the devices.
One prospective client, which cannot be named, is a major financial services firm with "hundreds of thousands of employees."
For security-obsessed corporations, this sort of technology can appear to have a lot of upside.  If all of your employees are chipped, you will always know where they are, and you will always know who has access to sensitive areas or sensitive information.
According to a top official from Biohax, the procedure to implant a chip takes "about two seconds", and it is usually implanted in the hand...
A syringe is used to place the chip in an area between the thumb and forefinger, according to the report. Osterlund said the procedure is similar to ear piercing and takes "about two seconds." The microchips operate via "near field communication" technology, similar to what is used by no-contact bank cards.
"In a company with 200,000 employees, you can offer this as an opt-in," Osterlund told the Telegraph.
Right now, many companies use security badges, and I once worked in a building that required a security badge.
But security badges can be lost, stolen or forged.  Theoretically, microchip implants are much more permanent and much more secure, and that is one of the big selling points.  The following is what the chief medical officer of Biohax recently told Fox News...
"The chip implant is a secure way of ensuring that a person's digital identity is linked to their physical identity. It enables access management in a way that protects individual self-sovereignty and allows users to control the privacy of their online activity," Dr. Stewart Southey, the Chief Medical Officer at Biohax International, told Fox News.
Of course once this technology starts to be implemented, there will be some workers that will object.
But if it comes down to a choice between getting the implant or losing their jobs, how many workers do you think will choose to become unemployed?
Yes, there will be some that will sacrifice their jobs but just like with so many other things, most of the population will simply choose to accept the "new technology".

Sadly, the mainstream media is now openly telling us that this is coming.  For example, the following is an excerpt from a recent Fox News article entitled "Are you ready for a chip implant?"...
"You walk into a grocery store and pick up eggs. No smartphone? No problem. You swipe your hand across a reader, and the amount is deducted from your bank account".
If that sounds far-fetched, you obviously haven't been to Sweden recently, where thousands of people have chips implanted in their bodies for paying to be able ride the train.
And not too long ago, the NBC affiliate in Tampa profiled a mother that desperately wants to implant a microchip into her disabled child for safety reasons...
For Steffany Rodroguez-Neely, life is busier than ever. The Bay Area mother-of-three has her hands full 24-hours a day. The ages of her children run the gamut from newborn to teenager. While this Lutz mom prides herself in being an attentive, active, dedicated mother, she's also a realist. She knows an emergency can happen in a matter of seconds, even to the best of parents.
When Steffany saw the recent tragedy in Pasco County where a toddler wandered into a pond and drowned, her heart was broken. As she talks about it, she shakes her head sadly, closes her eyes and sighs. "It was awful, so sad. You know, good parents have bad things happen," Steffany told WFLA.
They always like to use the children to make us feel guilty.
The narrative will be that if you are against implantable microchips then you are against child safety and you are a bad person.  By now, you have seen how this works on issue after issue.  There won't be any talk about the potential tyranny that government-issued identity microchips could unleash.  Instead, all of the talk will be about the "potential benefits" and about how this will make things so much safer "for the children".
We truly do live in apocalyptic times, and many of us can see where all of this is leading.  Unfortunately, we can complain all that we want but the agenda just keeps moving forward.
Not too long ago, a Wisconsin-based company called Three Square Market began implanting microchips in their employees "on a voluntary basis".  In the aftermath of that decision, USA Today published an article entitled "You will get chipped -- eventually".
They want you to believe that it is inevitable and that everyone around you will eventually give in and get chipped.
If this sounds like something you have read in the Book of Revelation you are correct.
The Book of Revelation warns that during the Tribulation every person will be required to accept a mark which will signify worship of a one world leader and be necessary for commerce:
"And the second beast required all people small and great, rich and poor, free and slave, to receive a mark on their right hand or on their forehead, so that no one could buy or sell unless he had the mark -- the name of the beast or the number of its name. Here is a call for wisdom: Let the one who has insight calculate the number of the beast, for it is the number of a man, and that number is six hundred sixty-six". Revelation 13:16-18
Most Christians recognize that current chip implants are not the actual "mark of the beast", yet there is concern that acceptance of such technology is conditioning people for when the real one does come along.
What often starts off as voluntary can just as easily become mandatory and whereas tech itself may be neutral, in the hands of the wrong person it could be extremely dangerous.  Imagine the technology of today in the hands of Hitler.
Christians have long debated the meaning of the "mark of the beast".  It still remains to be seen if the mark will be microchips under the skin or some other form of payment using the hand such as Amazon Pay, but there is no denying it, our generation appears to be the first in history to have the technology to fulfill this prophecy.
For a more in-depth examination of the issues relating to the Antichrist, Mark of The Beast and other world events on our horizon be sure to check out Bill Salus new teaching "The Last Prophecies":
Learn more about the Last Prophecies at the book trailer here
Purchase The Last Prophecies Book here
Purchase The Last Prophecies DVD here
Purchase The Last Prophecies Book/DVD combo package here.