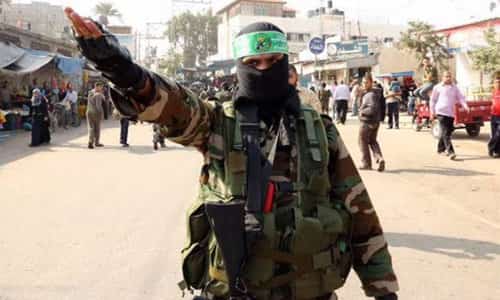 By PNW Staff June 02, 2016
Share this article:
Filmmaker Ami Horowitz sought to find out just how wide spread anti-Israel American college campuses have become, and so he posed as a fundraiser for Hamas terror attacks at Portland State University (PSU) in Oregon.

"I want to see if these guys are willing to take it to the next level," Horowitz said pre-experiment.
Posing as a representative of "American Friends for Hamas," Horowitz made clear to the students that his fictitious group raises money for terrorist attacks by the Gazan terrorist organization targeting Israeli "schools," "hospitals" and "places of worship."
He described suicide bombers as the "poor man's F-15," and told students that hitting civilian targets is "the only way to fight back, really."
Horowitz told the students that Hamas, which is outlawed by the US and in its charter calls for the genocide of the Jewish people, is the "logical extension of BDS," indicating the boycott movement targeting Israel. He clarified that "we're looking to wipe Israel off the map."
Shockingly, students showed overwhelming support for the cause.  One student commented: "I've actually been learning this last school year about everything that's going on over there so I like the sound of what you're doing, it sounds like a great thing to do."
"I'm totally against the Israeli genocide," said another.
The filmmaker asked the students to donate to his fictional site so as to fund Hamas terrorist attacks, and students told him the amount they would be willing to pledge, offering figures between $5 to near $30.
In under an hour, Horowitz was able to raise almost $300. One female student agreed to put down $27 - an amount equivalent to that she shelled out for Bernie Sanders' presidential campaign.

Horowitz spoke of his video to Hannity on Fox News. "Let's be clear," he started. "Its not that these kids are stupid or misinformed or ignorant - I could not have spelled it out more specifically, that we want to use this money to kill Jews."
"And their response was, 'hey, I've been learning about school and I'm happy to help you.'"
"There is a lack of critical thinking, and it becomes a parroting of what their professors teach them," Horowitz said. "The main reaction to this video is stone-cold shock. People have a hard time wrapping their minds around this."
"I spelled it out to them," Horowitz said of his interaction with the students. "As long as you're killing Israelis, our college students are happy to do it because of the poison being fed to them by professors year in and year out."
Horowitz has made a name for himself exposing anti-Israel attitudes. In November 2014, a video showing Horowitz waving an ISIS flag at Berkeley and receiving widespread support went viral, garnering over 1 million views.
Watch Horowitz's "Hamas is Fantastic!!" video below: