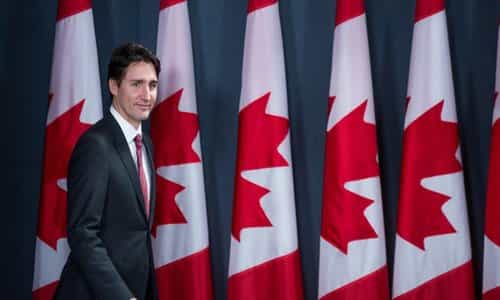 By PNW Staff June 02, 2016
Share this article:
Liberal Prime Minister Justin Trudeau has wasted no time in leading Canada into a hard shift to the left after almost a decade under the leadership of Conservative Prime Minister Stephen Harper.

Whether it's insisting on pulling combat aircraft out of the air war against the Islamic State in Iraq and Syria, or shifting into neutral on pipelines, or borrowing billions more than he said he would to "invest in social infrastructure" -- Trudeau is changing the political and social landscape of the country.
In the past few weeks Trudeau has given support to several positions on social issues that continue on this left-leaning path.
Assisted Suicide:
The Canadian House of Commons approved an assisted suicide bill on Tuesday, sending the legislation on to the Senate.
MP's voted 186-137 in favor of Bill C-14 which stipulates that physician assisted suicide may be permitted for those who are at least 18 years old, have a "irremediable medical condition," have made a voluntary request without pressure to end their life, and sign a form giving their consent. It also removes any criminal penalties against physicians or pharmacists who assist in the person's death.
Groups such as the Euthanasia Prevention Coalition characterize the legislation as being "particularly dangerous."
"The bill requires a medical or nurse practitioner to: be of the opinion that the person meets all of the criteria. To 'be of the opinion' is a very low standard. It will be impossible to prove that the medical or nurse practitioner was not of the opinion that the person met all of the criteria," Executive Director Alex Schadenberg wrote in a blog post.
"It is unbelievable that legal immunity is provided to anyone. This bill provides the perfect cover for acts of murder," he said.
LGTB Issues:
Prime Minister Justin Trudeau raised the Pride flag on Parliament Hill on June 1st,  for the first time in the country's history.
The flag gesture comes after the party announced that Trudeau would march in Toronto's Pride parade, the first sitting prime minister to take part in the festivities.
The Liberal government has also introduced legislation that would extend further legal and human rights protections to transgender Canadians.
Bill C-16 would update the Canadian Human Rights Act and the Criminal Code to include the terms gender identity and gender expression.
If passed, the legislation would make it illegal to discriminate on the basis of gender identity or expression. It would also extend hate speech laws to include the two terms.
Those found guilty of Anti-Transgender Speech could face up to two years in prison.
Canadian law already prohibits anti-gay "hate propaganda."
In 2013, the Canadian Supreme Court upheld the conviction of a Christian street preacher who was distributing leaflets denouncing homosexual acts. The court held that the man had used "vilifying and derogatory representations to create a tone of hatred" against gay people, the Legal Examiner reported at the time.

The court determined that the pastor's behavior constituted "hate propaganda" and that his religious beliefs did not excuse him from violating the law.
What clarifies as "hate" remains very much open to interpretation. It is unclear how far the Canadian courts will be willing to crack down on Christian Pastors who teach from Biblical passages dealing with such issues in the church.
With the new Transgender Hate Speech laws one wonders if teaching about the nature of God's creation being male and female will be considered intimidation/hate to those who have chosen a gender neutral identity.
Islamphobia
Next up on Trudeau's agenda will be tackling "Islamophobia" as a greater number of Muslim refugees make their way into Canada, thanks to his open doors policy.
In an effort to stamp out racism experienced by Muslims, the Liberal Party of Canada is considering adopting a policy aggressively to eliminate Islamophobia.
Omar Raza, director of the Windsor West Federal Liberal Association, is already making a pitch during the upcoming Liberal convention in Winnipeg to create a party task force to tackle the issue.  He wants to see the party address Islamophobia in the same way it has tackled the transgender issue.
Whereas no one should experience hatred for their beliefs, such laws often extend far beyond their original intentions. The term "Islamophobia" can have a broad meaning.  No doubt it will be defined similar to what some Christians in Europe are experiencing.
Several pastors have been subject to "hate" trials for teaching the dangers of Islam according to scripture while other Christians have been accused of "hate" for sharing their faith with Muslim co-workers and have even lost their jobs as a result.
Trudeau has only been in power a short while yet already he has shifted Canada farther to the left than most would have guessed.  One can only imagine where he will take the country over the rest of his term in office.