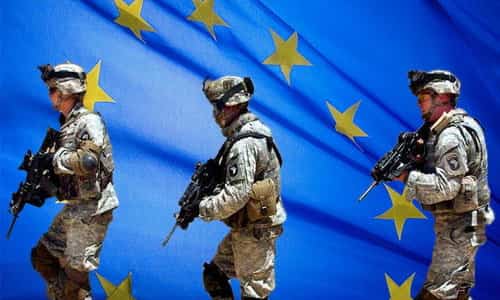 By PNW Staff June 02, 2016
Share this article:
Is the European Union working covertly to create a trans-national army and, if so, what could that mean for Britain as it considers it's future within the Union.

According to several sources, The Times reported information leaked by an EU official that reveals an intent to build a unified military, which could potentially bypass the individual governments of nation states in the union, among other ramifications.
On May 27, the Telegraph reported Brussels officials were trying to keep plans for the EU army hidden until after the June 23 referendum vote, also called the Brexit vote, when citizens will determine whether Britain should secede from the EU.
Former Defense Secretary of State and Brexit supporter Liam Fox, who served under David Cameron, told the Telegraph Europe's "defense ambitions" are becoming a threatening reality and warned Britons "cannot afford to be conned in this referendum as we were conned in 1975."
The proposal was kept in a sealed room where it could be seen only by a small number of EU political and security committee ambassadors. A diplomat took notes from the proposal that were leaked to The Times. The plans, according to a May 27 article by Breitbart, include mechanisms set out in the 2009 Lisbon Treaty, a centralized headquarters and "permanent structured defense cooperation."
"Our external action must become more joined up across policy areas, institutions and member states," the proposal states.
If materialized, a December 2015 article by Breitbart claims, the army would possess "the ability to take control of national borders without the consent of the government of the nation in question."
"In theory, this would mean that EU army members could seize border controls, or lack thereof, from countries like the United Kingdom without the permission of the country's leaders or elected representatives," the article states. Funding for the force would reach ¬ 322 million.
The New American, in an April article, fretted that the process "is already well underway," and without "democratic legitimacy."
The initiative has begun with the merging of German and Dutch forces, thus creating the nucleus for the future EU army. The two countries' naval forces also are being merged, the Express reported.
A training exercise, funded by the EU, recently was held in Germany that involved about 600 members of various European police and military forces, as Breitbart London revealed last month.
The terrorism climate in Europe creates an opening for the idea of an EU army to seem more appealing. Immigration concerns many EU states. European Union officials see an opportunity for expansion, "as hawkish EU taxpayers, as well as those on the populist right, demand a greater crackdown on immigration," Brietbart reported.

"Under the guise of dealing with the orchestrated 'refugee crisis,' the EU is also imposing a transnational armed force with power to intervene in member states, even against their will," The New American states.
According to Breitbart, a Ministry of Defense spokesman insists Britain will "never be part of an EU army," and the country retains "a veto on all defense matters in the EU." David Cameron also denies an EU army is possible.
However, even if the United Kingdom were to veto the creation of an EU Army, as it vetoed similar proposals in 2011, sources claim there is concern a group of nine states would be capable of bypassing opponents.
The Express quotes Armed Forces Minister Penny Mordaunt as claiming the situation gives Britain "the worst of all worlds."
"As usual with the EU, the plan for this army would see Britain paying the highest price, [but] getting a raw deal," she is quoted as saying. "They've done that with our budget. I'm not going to let that happen to our armed forces."
The Tory MP for North West Leicestershire Andrew Bridgen argues Britain is falling prey to the EU's questionable operations, according to the Telegraph.
"The people were deceived about the aims of the EU in 1975 and they're being deceived again today," Bridgen is quoted as saying. "For the security of our country, we must vote to leave the EU."