Iran: Women Protest The Hijab - Sweden: Hijab Is "Look Of The Year" 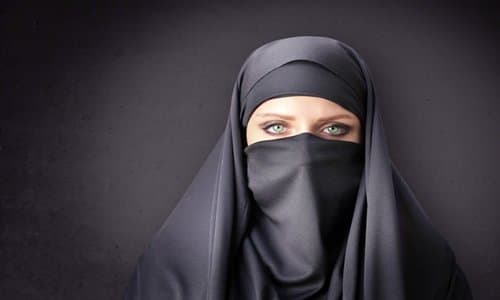 By Judith Bergman/Gatestone Institute February 03, 2020
Share this article:
On January 20, Iran's only female Olympic medalist, Kimia Alizadeh, defected from Iran. "I am one of the millions of oppressed women in Iran whom they've been playing for years," she wrote.
Then, last month, the Islamic Republic's female chess master, Mitra Hejazipour, 27, removed her hijab during a chess tournament in Moscow and was promptly removed from the national chess team.
Hejazipour said that she had decided "not to have a share in this horrendous lie and not to play the game of 'We love the hijab and have no problem with it' anymore..."
"It creates many limitations for women and deprives them of their basic rights. Is this protection? I say definitely not, it is solely and merely a limitation."
For years, women in Iran have been arrested and imprisoned for refusing to wear the mandatory headscarf and even for protesting its use.

Between January 2018 and August 2019, at least 12 people were given prison sentences ranging from six months to 33 years for publicly removing their headscarves and other public acts of civil disobedience against compulsory hijab and 32 people were arrested for such acts, according to Center for Human Rights in Iran.
According to the website:
"Millions of women who do not conform to the state's dictates regarding mandatory dress codes are stopped by the police each year for 'improper hijab,' and tens of thousands are referred to the judiciary in court cases each year... hijab protestors are... typically prosecuted under charges related to 'morality,' such as 'encouraging people to corruption and prostitution...'".
"The Iranian authorities are employing the full machinery of the state to crush opposition to forced hijab, but with more than half the population against it, the tide is increasingly against them," said CHRI's Executive Director Hadi Ghaemi.
As women in Iran protested the regime and the mandatory hijab, women in Sweden -- who are represented by "the first feminist government in the world" -- were championing the hijab on several recent occasions, illustrating the curious cultural transformations there.
In January, readers of the Swedish edition of Elle magazine picked Imane Asry, a hijab-wearing social media influencer with 150,000 Instagram followers, as winner of its "Look of the Year" competition.

"This prize is for all of us who did not see ourselves in the fashion magazines because we did not fit in... This is an acknowledgement that it is more than time that we begin to normalize the hijab in the fashion industry. Fashion is for everybody," Asry told Elle.
Swedish Elle readers are obviously free to choose whomever they see fit to be "look of the year". It is, however, perplexing that female readers in a self-proclaimed feminist nation choose a woman who wears the hijab, when a study commissioned by Swedish authorities has shown that wearing a hijab for many women and children in Sweden is far from being a voluntary choice.
As previously reported by Gatestone Institute, a 2018 study commissioned by the Swedish Civil Contingencies Agency and written by researchers at the Centre for Societal Security (CTSS) at the Swedish Defence University, showed that radical Islam had spread to several Swedish cities and that this meant that in some areas, "There are parents...who put veils on their three-year-olds". The authors of the study also mentioned that schools and other local authorities did not know how to deal with the challenges created by the radical Islamists.
One example was when a Muslim schoolgirl wanted to take off her headscarf to play hairdresser with the other children, the Swedish school staff did not allow it out of respect for her parents' wishes. In an example from a Swedish preschool, a little girl did not want to wear her headscarf but the Swedish personnel forced it on her, "even though it felt wrong", because it was the parents' wish.

These are not the only examples of Swedish teachers appearing unbothered by considerations about little girls' rights not to have the hijab forced upon them. In the city of Skurup, municipal authorities recently prohibited wearing of headscarves in the city's schools. At one school, Prästmosseskolan, six female non-Muslim teachers wore hijabs to protest the decision.
The headmaster said that he would never make a student remove their veil; that he considered the decision discriminatory and in contravention of the Swedish constitution, which guarantees freedom of religion.
Around 250 Muslims demonstrated against the decision to ban the veil. "The ban is about taking Muslim women's rights to their bodies away and removing their democratic rights and choices. It is a racist policy", said Tasnim Raoof, chairman of the organization Malmö's Young Muslims.
"Those of us who have fled gender apartheid dictatorships, where women risk their lives to protest the veil, know and have experienced what chastity laws mean... The veil, also in the West, marks the difference between the pure (chaste) and the unclean... woman," wrote Maria Rashidi, a Swedish-Iranian human rights activist whose husband burned her face with acid when she requested a divorce, and Sara Mohammad, a Swedish-Iraqi human rights activist, who fled Iraq after her brother threatened to kill her if she did not marry the man that her family had chosen for her. The added:
"The veil signals chastity ethics that can be linked to daughters' responsibilities for the family's honor... But our feminist government chooses to prioritize collective religious rights over the human rights of children and women... As long as influential journalists see gender apartheid as 'culture' and those in power support the organizations that sanction it, oppression based on honor will continue".
On February 1, World Hijab Day was marked in countries all over the world, including in Sweden.
Originally published at Gatestone Institute - reposted with permission.