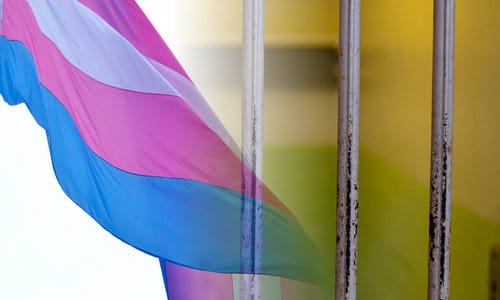 By Jonathon Van Maren/Bridgehead.ca February 05, 2020
Share this article:
If you were one of those inquiring souls who was wondering just how crazy the transgender phenomenon could get, the answer to that question may have just surfaced in the Des Moines Register under the headline: "Convicted of sex crimes as a man, felon no longer deemed threat because of gender change."
Yeah, you read that right. According to the Register: "The Iowa Attorney General's Office is no longer seeking the commitment of a former Midwest Christian services student convicted of myriad sex crimes because the individual now identifies as a woman.
Court records show the state dismissed the application on Jan. 9. Attorney general spokesman Lynn Hicks wouldn't comment on the reason for the dismissal other than to say 'an offender's hormone levels are an important part of substantiating an offender's likelihood of recidivism.'"

To provide a bit of context here, Joseph Matthew Smith is a 23-year-old who was convicted of molesting a fellow student back in 2014, but according to state's expert Dr. Jeffrey Davis, Smith has molested as many as 15 children--ranging from ages one to 13.
In fact, Davis's report indicated that "the likelihood of re-offending within five years of release exceeded 20% because victims were of both genders, and because Smith was under age 25 and never had a long-term relationship."
But because this pedophile now identities as a woman named Josie--and the Des Moines Register refers to Smith as "she" throughout their reportage on this insanity--he will now be set free. Smith had started the process of getting "started on transgender classification in October 2017 and started using female pronouns" at Newton Correctional Facility, and attorney general spokesman Lynn Hicks "cautioned the public not to overreact to Smith's upcoming release" because he will still be "subject to sex-offender registration requirements."
To summarize: A convicted pedophile who molested children ranging from the ages of one to 13 is being set free despite a report indicating a high chance of re-offending because he now identifies as a woman.
He's not the only one, either. A 45-year-old sex offender named Joseph Gobrick recently told a judge that his activities were licit because he identified as an eight-year-old girl, and that images of children being abused found in his possession were protected by the First Amendment.
Child abuser Duncan Brooks, who now refers to himself as "Jacinta Brooks," has been in and out of jail for targeting kids. And a dangerous male pedophile now identifying as "Madilyn Harks," who claimed to have molested up to sixty girls, was set loose in Brampton last year.
Additionally, male prisoners are increasingly identifying as females in order to get locked up in women's prisons, leaving vulnerable female prisoners behind bars with convicted sex offenders. In some instances, this has already resulted in female prisoners getting sexually assaulted by male criminals pretending to be women. Any sane society would see this for what it is, but that is unfortunately not the society that we live in.

Every time progressives demand some sweeping new change to our society, they always pose a simple, persuasive question: "Who will this hurt?" They then proceed to shout down or ignore the many answers to that question--and they will defend their "progress" no matter what the cost.
Thus, violent male pedophiles can be set loose after identifying as female because we are now required to believe that this man is a woman once he claims to be. I doubt even those who arranged for his release really believe, deep down, that this man is a woman. But that doesn't matter anymore, because they must act as if they do--and we must pay the consequences.
Update:
There were, understandably, quite a few readers who read my column last week on a convicted pedophile who was released after identifying as a woman with no small measure of incredulousness. The story seems unbelievable, and even though I cited multiple other examples of similar incidents, some people simply do not believe that the transgender phenomenon can lead to this level of cultural insanity.
Unfortunately, another example of this new reality turned up in the Toronto Sun only a few days later in a story broken by Brad Hunter. Convicted child sex killer Michael Williams, a "psychopathic" and "horrendous" murderer who earned the nickname "Pyro" after attempting to set a dying victim on fire, has discovered the fact that he, like many other male prisoners convicted of brutal crimes against women, can play the transgender card--and our government and prison authorities will literally be obligated by their ideology to treat him as a woman.
For context, Williams was one of several perpetrators who raped 13-year-old Nina Courtepatte at a golf course near Edmonton when he was 17. After the rape, the young girl was strangled, stabbed, and then smashed to death with a hammer, at which point, Williams earned his nickname by attempting to set her alight.

His crimes were so heinous that even Canada's soft-touch criminal justice system handed down an adult sentence of prison for life, with Judge Franklin noting that: "She died in the darkness of night on a cold, hard field without any comfort but rather in the company of Michael Williams and others who tormented, beat and raped her in a vicious and senseless act of violence...Michael Williams seemingly felt nothing."
Now 32 years old, Williams has announced that he is joining Canada's transgender community. According to Hunter: "Prison sources told The Toronto Sun he is having the time of his life...Williams self-identifies as a woman although one source said his nod to the fairer sex is cursory at best.
'He is now sitting in segregation at Kent awaiting transfer to FVI (Fraser Valley Institute women's prison),' one source said. 'He was at FVI before but got transferred back to Kent because he got caught having sexual relations with female inmates.'"
In fact, Williams isn't even attempting to actually "change his gender," because today's trans activists demand that we believe somebody is precisely what they say they are, despite any and all evidence to the contrary. Williams has donned a bra and a crop-top to make his "transition" somewhat convincing, but "only takes hormone replacement therapy drugs two weeks a month so he can maintain an erection."
No sane person, of course, needs to ask what he needs that for as he heads to a female prison. And as the Toronto Sun reported earlier, "the criteria for a male jailbird to declare themselves trans is woefully thin. Five questions. That's it."
It's not as if Williams has been a model prisoner, either. He's been shuttled around the prison system several times for what has been dubbed "maladaptive behavior," and the Sun reported that he was "determined to be at high risk to offend violently...I fear for the women that will soon be exposed to him.
We need to stop this." Williams, of course, is playing the "transphobia" card and claiming that he's being victimized in men's prison because of his transgender identity. His cause has attracted the attention of one of Canada's most notorious activists:
In a tweet, trans activist Morgane Oger characterized a trio of sex assaults allegedly committed by Williams as "false allegations." Oger encouraged the sex killer to seek a transfer to FVI which has reportedly been turned down. She tweeted: "Trans women are simply unsafe in men's prisons."
At Williams' 2007 murder trial, Judge Janet Franklin noted that he may not feel remorse for decades.
In case it was unclear, Michael Williams, a child rapist who tortured his victim before she finally died, is the "trans woman" that Oger feels is "unsafe" in the men's prison he ended up in for brutalizing a 13-year-old girl.
Williams is now heading for a prison where women will find themselves locked in with a cruel man who is enacting a laughable charade that pathetic ideologues are forced to play along with because they have bowed to the transgender agenda and now cannot find a way to stop awful things from happening.
Women will probably get hurt. We know this.
But according to trans activists like Morgane Oger, this child rapist is a woman, too.
Originally published at The Bridgehead - reposted with permission.