The Jewish Left Is Dead In Israel. Why Is It Thriving In America? 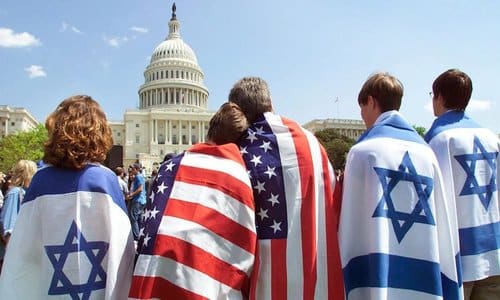 By Jonathan Tobin/JNS.org February 06, 2020
Share this article:
The unveiling of President Donald Trump's Middle East peace plan last week engendered the usual partisan responses that attend to anything the administration does. Although it was welcomed by a cross-party consensus in Israel, even those Democrats who count themselves as friends of the Jewish state denounced it.
This has helped to highlight not just the differences about Trump, but the enormous divide between Israeli and American Jews.
Those who follow politics in both countries have already got used to the idea that Israeli Jews are living in a red state while American Jews inhabit a blue bubble. But we need to drill down a bit deeper and understand that the Jewish left has basically imploded in Israel, even as it still gains ground in the United States.

The collapse of the political left in Israel is nothing new. The last gasp of dominance by the Labor Zionist movement that helped found the Jewish state and many of its leading institutions was the 1992 election in which Yitzhak Rabin led it to victory.
In that year, Labor won 44 Knesset seats, and its main left-wing ally, Meretz, won another 12 on the basis of approximately 44 percent of all ballots cast. Rabin was dependent on the votes of the ultra-Orthodox Sephardi Shas Party, as well as the tacit support of the Arab parties in order to govern, though his control of such a large bloc of left-wing seats made it a decisive victory.
Within a decade, Labor's grip on power was but a memory. The attempt of Ehud Barak, the last Labor prime minister, to offer PLO chairman Yasser Arafat an independent Palestinian state crashed and burned. Arafat's refusal was followed by a terrorist war of attrition that destroyed the faith of Israelis in the Oslo Accords and the judgment of Rabin's successors.
Fast-forward to Israel's most recent election in September, and what was left of Labor and Meretz, augmented by a faction of Mizrachi defectors from the Likud combined, won only 11 Knesset seats with barely more than 9 percent of the vote. After that debacle, the two parties merged.
But polls measuring voter sentiment about next month's election show the combined ticket only managing to get anywhere from seven to 10 seats. That means that in the 28 years since Rabin's victory, the Israeli left has seen its support drop to approximately a small fraction of its former strength.

More than that, the parties of the left have been thoroughly marginalized in terms of the national discussion. The "land for peace" formula championed by Labor in its heyday was hardly even mentioned in either the April or September election campaigns.
The party that is now seen as the true successor to Labor--Blue and White, led by former Israel Defense Forces' Chief of Staff Benny Gantz--has been running to the right not merely of the rump of Labor and Meretz, but also of Prime Minister Benjamin Netanyahu and his Likud Party.
Some of Blue and White's members favor the left. Even so, Gantz has embraced not merely the annexation of the Jordan Valley, but has enthusiastically endorsed the Trump plan that American and Israeli leftists keep telling us precludes any hope for peace.
That presents a stark contrast to what is happening in the United States, where the American Jewish community seems to be leaning more to the left than ever.
The difference between these two Jewish tribes goes far deeper than politics. At the heart of the problem is the fact that the two nations embrace fundamental beliefs that are in some ways poles apart. The same is true about their vision of the role of Judaism or religion itself in the life of the two countries.
The American experiment in democracy is avowedly nonsectarian. Israel is a nation-state whose purpose is to provide a home and security for one specific people who had been persecuted for 20 centuries. The United States is a nation whose existence is rooted in universal values that seek to break down the barriers between peoples and faiths.
Like most other nations on the planet, Israel is an expression of particularism. Its priority is to reconstitute and defend Jewish sovereignty in the ancient homeland of the Jews and not to be the last and best hope of humanity.

American Jews see themselves as a minority in need of protection from the majority. So it is unsurprising they are overwhelmingly liberal in their political views and among the most loyal to the Democrats of any demographic slice of the population.
While the growing population of Orthodox Jews leans to the right, they are still a small percentage of the community. And despite the fact that Trump is more popular among Israelis than any of his predecessors, his historically pro-Israel policies have had little impact on his popularity in the American Jewish community, where voices on the left, even those of radicals like Vermont Sen. Bernie Sanders, are growing in influence.
To the extent that most American Jews think about the policies of the Jewish state, including border security and defense, they seem oddly unmoved by the same factors that have caused Israelis to abandon the left. Indeed, the positions about Middle East peace embraced by most American Jews and their Democratic Party allies are the ones that have been discredited in Israel.
The events of the last three decades that debunked faith in the nostrums of the left have made no impression on them. And while this trend long predated Trump, it's also true that Israeli appreciation for the president's support of their nation is viewed by American Jews as bizarre, if not perverse.
That leaves us with the two largest Jewish communities in the world largely drifting away from each other. American Jews who lean left on a host of issues still seem to want to save Israel from itself. But they need to reckon with the fact that the overwhelming majority of Israelis aren't merely just rejecting their views, but see their help as based in ignorance more than concern.
Originally published at JNS.org - reposted with permission.