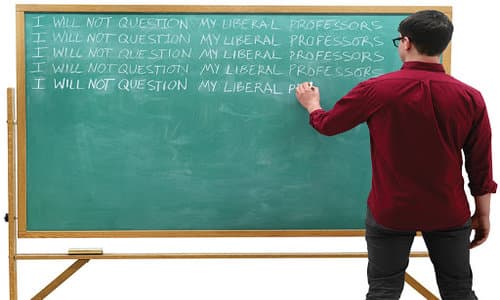 By Tony Perkins/Family Research Council February 06, 2020
Share this article:
It's no secret that college campuses are liberal, but what is news is just how liberal they've become.
According to a new study published by the National Association of Scholars, your teenager probably has a better chance of landing on the moon than having a conservative professor. And unless that changes, America needs to start rethinking this whole idea of "higher education."
Like most people, Brooklyn College's Mitchell Langbert knows the ivy league schools are biased. So, he set out to study the others -- the top two private and top two public universities in 31 states.

"Traditionally," he told listeners of "Washington Watch," "it's been known that the more elite schools are more Left." But, he explains, that's exactly what's moving the entire system Left.
"In order to advance in academia," he explains, "you have to publish papers in academic journals. And the editors of the journals are at the most elite colleges, which were the first to become predominantly Left."
That's caused a massive shift in education as time has gone on. So massive, it turns out, that when Langbert and his team studied the donations of 12,300 professors, they favored Democrats by a 95:1 ratio.
The absolute worst offenders in the Democrat-to-Republican donor pool, the research shows, were professors of English (244:1), Anthropology (214:1), and Psychology (184.1).
And interestingly, gender does play a role. Female professors, he found, were much more likely to give to Democrats than males (216:1, compared to 67:1).

The bias was less in the hard sciences -- like math. But even in subjects like economics, Langbert points out, "the people who get access to jobs, the Council of Economic Advisers and who get the most publicity and are quoted in The New York Times and places like that where they've been screened for Left-wing views.
I'm not going to say there's never an acceptance for a conservative viewpoint paper, but it's much, much harder and much less likely to be accepted if you make claims that are consistent with more conservative or free market or Christian ideas."
And the long-term and dangerous effect of that is that -- from the scholarly and hiring perspective -- there's an "ongoing winnowing of anyone who doesn't conform."
So what, if anything, can we do about it? Well, Langbert says, "First of all, we need to rethink whether college is the panacea it's been assumed to be. And secondly, whether the funding should continue for schools that function as ideological advocacy organizations...
The tax code section that provides tax exemption for colleges... prohibits ideological advocacy or political lobbying for organizations that receive tax exemptions. Yet I would argue that much of what goes on in colleges is precisely that. So in other words, they're already breaking the law."

That's a good public policy question to revisit: university funding. President Trump has waded into that arena with executive orders on campus free speech, but there's a broader conversation to be had.
Meanwhile, as parents, the best weapon we have in this toxic environment is awareness. It's important for every mom and dad to understand that they're sending their tuition checks and children off to campuses actively working to undermine what they've taught their kids at home.
That's why parents have to be even more vigilant, raising and grounding their children in the truth.
In this culture, it's a full-time job fending off the world's negative influences. That's why Deuteronomy 6:6-9 tells us: "These commandments that I give you today are to be on your hearts. Impress them on your children. Talk about them when you sit at home and when you walk along the road, when you lie down and when you get up. Tie them as symbols on your hands and bind them on your foreheads. Write them on the doorframes of your houses and on your gates."
Originally published at Family Research Council - reposted with permission.