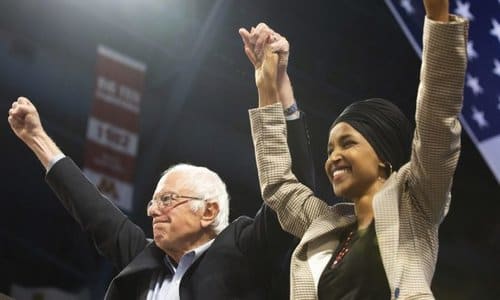 By Jonathan Tobin/JNS.org February 10, 2020
Share this article:
Iowa's first-in-the-nation caucus ended in chaos for a Democratic Party that was looking for clarity as the presidential race began in earnest. But while the Hawkeye State event will be best remembered for its dysfunctional results, the campaign there was also the beginning of what may prove to be a crucial element of the contest: the efforts of pro-Israel Democrats to ensure that their party nominates anyone but Vermont Sen. Bernie Sanders.
With a major ad buy attacking Sanders by name and calling attention to his recent heart attack, as well as questioning his electability, a Super Pac backed by a centrist pro-Israel political action group fired a shot in what is becoming a nasty civil war between Jewish Democrats.

The ad was the work of the Democratic Majority for Israel (DMI), a well-funded group founded a year ago to counter a trend in which Democrats are increasingly perceived as drifting away from support for the Jewish state. A half-century ago, Democrats seemed like the solidly pro-Israel party with the GOP divided.
But in recent decades, Republicans have become the lockstep pro-Israel party with the Democrats split between centrists who remain broadly supportive and a growing left-wing activist wing that is hostile to its policies, and even to the idea of the existence of the Jewish state.
Though Sanders is bidding, along with the more centrist billionaire Michael Bloomberg, to be the first Jewish president, he is easily the most critical towards Israel of any of the Democratic candidates. Although he supports its existence, he also has a record of bashing its measures of self-defense against terrorism.
He is not alone among Democrats in being hostile to Israeli Prime Minister Benjamin Netanyahu or in advocating a return to the Obama administration's more equivocal stance towards its government. But he has also called for withholding U.S. aid to Israel to demonstrate displeasure with what he considers to be its "racist" leader and has even advocated diverting some of that support to Hamas-ruled Gaza, whose isolation by the international community he opposes.
Equally important, Sanders's campaign has earned the support of some of the Democrats' most fervent opponents of Israel, such as Reps. Ilhan Omar (D-Minn.) and Rashida Tlaib (D-Mich.). In the last year, the two congresswomen have been guilty of making flagrantly anti-Semitic remarks about supporters of Israel and of the Jewish state itself.

Yet Sanders has not distanced himself from them, and in fact includes a number of similarly minded surrogates campaigning on his behalf, like Linda Sarsour, who also has a history of making anti-Semitic and anti-Zionist declarations.
Groups like DMI rightly claim that Omar and Tlaib, and Sanders himself, don't speak for all Democrats on Israel or anti-Semitism. Yet the two "Squad" members are treated like rock stars in their party and faced no consequences for their statements or their support of the anti-Israel BDS movement, whose rhetoric is drenched in the language of traditional anti-Semitism. It is not irrational to fear that a Sanders's administration would find a place for them in important posts.
Republicans are able to tout Trump's historic support of Israel. But while Democrats correctly dismiss fears that the president will make inroads among Jewish voters because of this--Jews remain among the most faithful supporters of the Democrats, irrespective of their stances on the Middle East--the DMI is right to fear that if Sanders wins the nomination, Israel will become a major point of contention in the general election campaign. In that case, Jewish Democrats would be forced to choose between their partisan loyalties and their affection for Israel.
It was interesting that the DMI, which is headed by veteran Democratic strategist and pollster Mark Mellman, never mentioned their main issue in their first broadside. Instead, the ad, which was the first time Sanders was targeted by name by a Democratic PAC in either the 2016 or the 2020 campaigns, focused on both his alleged inability to beat and his health status, not his stands on the issues.
Yet the ad didn't seem to hurt the Socialist, whose strong showing in Iowa and sizable lead in the polls in New Hampshire, the next state to vote, makes him the current frontrunner.
With former Vice President Joe Biden--the first choice of many pro-Israel Democratic donors--looking vulnerable after his poor showing in Iowa, the possibility of Sanders being the nominee fills pro-Israel Democrats with fear and disgust.

Looming in the back of their minds has to be the possibility that Sanders might, as Trump did in the 2016 GOP primaries, ride the support of an aroused base to the nomination while centrists fumble about backing one unsuccessful alternative after another, even as pundits kept insisting that he can't win.
Democrats who oppose Sanders could look to former New York City Mayor Michael Bloomberg as their potential savior. Bloomberg has asserted his willingness to spend as much of his $56 billion fortune as needed to become the Democratic nominee and defeat Trump.
But no previous candidate has ever skipped the early primaries or relied solely on astronomical expenditures to win a major party nomination. It also may be a stretch to think that a party trending to the left can nominate a centrist like him.
If Sanders puts together a few wins and Biden collapses, it's likely that groups like DMI will be in full "Stop Sanders!" mode.
If so, the stakes in this effort won't be as much about Sanders as it will be whether the left-wing activist base is going to be able to hijack the Democratic Party. DMI's foreign-policy agenda flies below the radar of most voters right now.
But as Democrats decide whether their party will be taken over by a Socialist and his extremist supporters, attitudes towards Israel may yet be the canary in the coalmine that may well determine the future of the Democratic Party.
Originally published at JNS.org - reposted with permission.