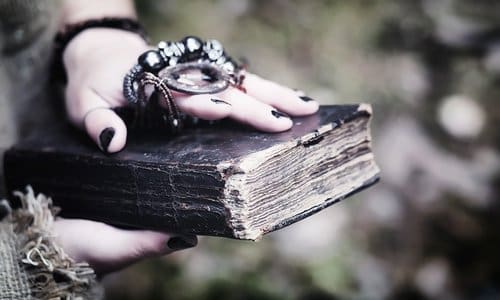 By Adam Eliyahu Berkowitz/BIN February 20, 2020
Share this article:
A group of self-professed "Christian witches" announced they will be holding their annual convention on Easter in Salem, Massachusetts.
The gathering of  "Witches, Sorcerers/Soceresses, Wizards, Warlocks, Necromancers, Readers" and "like-minded Magickal Beings" is being organized by Rev. Valerie Love (aka KAISI). Scheduled for April 10-12, it will coincide with the Christian holiday of Easter and feature elements of witchcraft as well as Christian prayers.

Love bills herself as a spiritual life coach and "ordained Minister of Spiritual Consciousness." On her website, Love claims to have been born a witch, and, as a child, "saw spirits and communed with otherworldly entities."
She also claims to be a practicing Christian Witch and founded the Covenant of Christian Witches Mystery School which she claims is in the "Solomonic tradition." In an Instagram post, Love stated that the Book of Psalms "is really a book of spells."
The convention will include lectures on "Magickal Practice in the Christian Witchcraft Tradition", a cemetery walk, Tarot, palmistry, and Angel readings. There will be a Harry Potter-themed costume party. The witches' convention will culminate with a Church service on Sunday.
On her personal website that focuses on personal enlightenment, love also offers coaching programs for an investment of $5,000 to $50,000. Love also holds seances.

Despite Love's claim that witchcraft can coexist with a Bible-centered existence, the Bible explicitly prohibits witchcraft:
You shall not tolerate a sorceress. Exodus 22:17
A man or a woman who has a ghost or a familiar spirit shall be put to death; they shall be pelted with stones--their bloodguilt shall be upon them. Leviticus 20:27
I will destroy the sorcery you practice, And you shall have no more soothsayers. Micah 5:11
Incorporating witchcraft into Christianity is the most recent manifestation of what is becoming a common trend as black magic makes a comeback, even surpassing some Christian denominations.
A study by the Pew Research Center in 2014 found that 0.4 percent of Americans, or around 1-1.5 million people, self-identify as Wiccan or Pagan. To put this in perspective, a report in the Christian Post on this study compares this to other religions.
"There may now be more Americans who identify as practicing witches, 1.5 million, than there are members of mainline Presbyterianism (PCUSA),1.4 million," the article wrote.
But modern witchcraft is taking on new forms. A new Disney animated television series released by Disney Television Animation titled The Owl House follows a young girl's adventures in an alternate universe as she strives to become a witch.
In a bizarre political use of the dark arts, a group of people used social media to gather in order to hex President Trump.
Despite being billed as an arts festival, the annual Burning Man Festival held in the Nevada desert incorporates many idolatrous elements.
Satan-themed fashion shows have even been held inside churches.
Originally published at Breaking Israel News - reposted with permission.