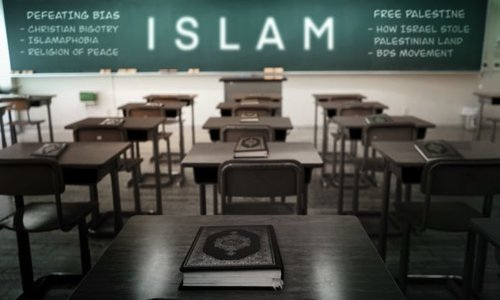 By Giulio Meotti/Gatestone Institute February 26, 2020
Share this article:
Western universities have become places of personal fear and intellectual terror. Formerly sanctuaries for open inquiry, instead fierce ideological minorities have been setting red lines of orthodoxy in the face of a silent or, worse, compliant academy.
Education -- from ex ducere, to lead out -- has been increasingly eroded by ideological fundamentalism and an attempt to determine not only what actions are acceptable, but even words and thoughts.
Social media has helped by officially reviving the lynch mob. We must now all sing the praises of multiculturalism, Islam, immigration, post-colonial guilt and racializing just about everything. In this new Inquisition, not even the slightest doubt or dissent can be tolerated -- it must be punished!
Freedom of expression is increasingly at risk in France by effectively creating new crimes of opinion. If your personal opinion coincides with the official one, you have nothing to fear. If your ideas conflict with the official ones, you risk becoming ostracized and your mere existence in the public sphere scandalous.

"The new academic fascism," is how Natacha Polony, a television host and editor of the French weekly Marianne, has described it. If you dissent, educators, political leaders, the media and the mob will try to destroy you, just as they destroyed Giordano Bruno in 1600 for saying that the universe could have many stars.
"Small radical groups create a climate of terror to impose opinions and silence their opponents," Polony wrote. "They enjoy infinite mercy from some political and media circles insofar as they claim to embody the Good. Who would dare to challenge them?"
Others -- for views regarded by some as politically incorrect, even if factually correct -- have, in the last few years, been surgically removed from society, or been threatened with removal:
Sylviane Agacinski. A conference with this feminist, scheduled to have been have been held at the Montaigne University in Bordeaux, was canceled by the organizers because "security" could not be guaranteed. Groups of leftist students had attacked the arrival of an alleged "homophobe" and had requested the event's cancellation.
Agacinski's alleged "crime" was to have opposed a new French law allowing lesbian couples access to medically-assisted procreation, such as IVF and sperm donation. Le Figaro's Eugénie Bastié calls "submission of the university to the new champions of virtue". The conference has since been rescheduled.
Mohamed Sifaoui. Shorly after the cancellation of Agacinski's conference, the "new fascists" took another academic scalp, this time at the famous Sorbonne University in Paris -- that of the Franco-Algerian journalist Mohamed Sifaoui. Sifaoui was forced to flee North Africa in 1999 after death threats from Islamists, and now lives in France under police protection.
His course on radicalization was recently cancelled at the Sorbonne. Sifaoui accuses "the pressures of Islamic associations and left-wing unions" for the cancellation. His course had been intended for police officers, gendarmes and officials -- precisely those under pressure after the murder of four police employees at Paris police headquarters by their colleague, a convert to Islam named Mickaël Harpon.

The Sorbonne just so happens to be the same university where Hezbollah, the Lebanese terror group, held a conference. Students, however, however recently caused the cancellation of a tragedy by Aeschylus that was to have been performed by actors in black masks. That, the students claimed, was "Afrophobic, colonialist and racist".
Alain Finkielkraut. Last spring, the philosopher of "unhappy identity", Finkielkraut, protected by the police and the DGSI, France's internal security agency, gave a lecture at Sciences Po University in Paris. Finkielkraut is now "afraid to leave his home". "I can no longer show my face on the street," he said in Marianne.
Sophie Coignard. Writing in Le Point, the noted journalist Sophie Coignard has denounced "a dreadful silence on these politically correct militias" and written of a conformism that "trades silence for tranquility. We know where these compromises lead".
Stéphane Charbonnier ("Charb"). The former editor at the French satirical magazine Charlie Hebdo, Philippe Val, speaks about "the territories of expression occupied by Terror". Charb, Val's successor at the helm of Charlie Hebdo, paid with his life.
On January 7, 2015, Charb, with eleven of his colleagues, was murdered by two brothers named Kouachi, shouting "Allahu Akbar."["Allah is the greatest!"] . Even Charb's memory is sadly filled with scandal: an academic event about his posthumous book, Lettre ouverte aux escrocs de l'islamophobie qui font le jeu des racistes ("Open Letter to Islamophobic Swindlers Playing into the Hands of Racists"), was censored at both the University of Lille II and the University of Paris-Diderot.
Maryam Namazie. An Iranian dissident journalist who moved to England, Maryam Namazie was prevented from speaking in some colleges, such as Goldsmiths and Warwick, on the grounds that her defense of free speech and anti-Sharia discourse might have offended Islamic students.
Thilo Sarrazin, a former German central banker and a critic of immigration, who was forced to resign from a management position at Germany's central bank in 2010 after publishing his book, Deutschland schafft sich ab ("Germany Is Doing Away with Itself"). He is presently in court over his new book, Feindliche Übernahme ("Hostile Takeover"), due out this summer. Sarrazin has also spoken amid the protests of students and teachers at the University of Siegen.
Bruce Gilley, a professor at the Portland State University, has defended the legacy of European colonialism in general and the British Empire in particular. In London, he lectured at a private seminar for students and took part in a panel discussion, but avoided a public event.
"If I gave a public talk to a student group entitled The case for colonialism, the result would have been a firestorm, and it would have served no purpose", he said. "But it would have shown the extent to which in Britain, of all places, people have stopped thinking about this most central of issues in British history and identity."

Nigel Biggar, a professor of moral theology at Oxford, was attacked for being supposedly lenient towards imperialism. "If I want to hold seminars on the topic of empire, I will do so privately," he has said. So he, too, has held a "private" academic conference in order not to be interrupted by activists.
Meanwhile, Islamist regimes are free to continue pouring vast amounts of money into these universities. Research by academics Jonas Bergan Draege and Martin Lestra, published in the Middle East Law and Governance Journal, calculated that between 1997 and 2007, Gulf entities provided at least £70 million to British academic institutions.
An appeal by some French intellectuals, including many Muslim thinkers such as Boualem Sansal and Zineb el Rhazoui, criticized this "intellectual terrorism." It recalls, they wrote, "what Stalinism did to the most enlightened European intellectuals.
"Our cultural, academic and scientific institutions are now targeted by attacks that, under the guise of denouncing 'colonial' discrimination, seek to undermine the principles of freedom of expression and of universality inherited from the Enlightenment".
Defending the freedom to think and the possibility of an open conversation -- both currently mutilated in Europe -- is the foundation of Europe's civic life. Without free expression, there can be no circulation of ideas, no increase in knowledge, and therefore no progress. The basic principles of liberal society are undermined.
"I disapprove of what you say, but I will defend to the death your right to say it," wrote a biographer of Voltaire. Free expression is not needed for "politically correct" or sedative speech, but it is the only protection the minority has from the tyranny of the majority. One does not even need look, for example, toward a country such as Pakistan, where mobs nearly murdered Asia Bibi after she was found innocent.
The United States, upon declaring their freedom from a repressive England in 1776, understood well the primacy of freedom of speech. George Washington told his army officers in 1783: "the freedom of Speech may be taken away -- and, dumb & silent we may be led, like sheep, to the Slaughter."
On US campuses it has become commonplace to cancel or protest invited speakers whom a handful of activists consider intolerable. The administrators are evidently too frightened of their own students to ask for the students' suspension, let alone their being expelled or requesting police support.
This same type of censorship, regrettably, can now be seen throughout Europe. Minority groups claim "safe spaces", but the ones who really need safe spaces are those who disagree with the reigning orthodoxy.
The European university -- which should be the home of open pluralism, debate, research and thought -- has instead become the paradise of intellectual sectarianism and terror. This new radicalism will reinforce not only political correctness, but also submission to coercion, "like sheep to the slaughter", in the West.
Originally published at Gatestone Institute - reposted with permission.