Are You Financially Prepared To Survive The Coronavirus Outbreak? 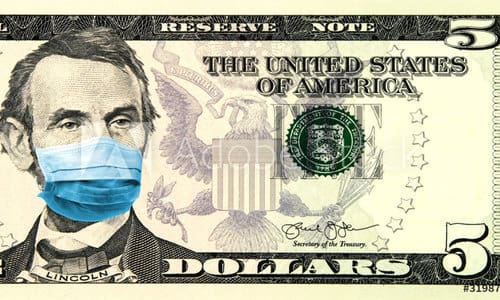 By Daisy Luther/Organic Prepper February 26, 2020
Share this article:
As the world tries frantically to contain a rapidly spreading outbreak of Covid-19, schools, public venues, tourist attractions, and workplaces are being closed in an attempt to keep even more people from contracting the illness. Quarantines and self-isolation protocols are also being instituted across the globe for those who may have been exposed.
Of course, everyone knows that millions of people in China have been in lockdown for more than a month. People are told to stay home, many businesses have ceased to operate, and Chinese New Year celebrations simply didn't happen this year. China's debts are all coming due now, at the worst possible time as the financial loss for the country has been astronomical.
For example, car sales are down 92% and Lunar New Year celebrations and travel that usually earn a billion dollars were canceled.
And that tourism hit affects far more than just China. In 2017, Chinese outbound tourists spent $258 billion around the world. The airline industry is bracing for a $29 billion dollar hit. All in all, this virus could end up costing the global economy more than 1.1 trillion dollars, a number that is practically unfathomable.
While the numbers cited here are outrageously large, obviously, these losses aren't only going to affect "the economy" and "the businesses." They're going to have devastating effects on normal folks who just want to go to work, pay their bills, and keep living their lives normally.
A great deal has been written about the economic hits on a global scale as well as the shortages we could soon expect as production in China grinds to a halt, but what about simply being able to pay your rent when your workplace or business is ordered to shut its doors?
Something nobody is really talking about is the financial hit that people will be taking during such closures. This is a very real concern, and for families who already live paycheck to paycheck, the loss of income could prove devastating.

How will containment efforts affect average folks financially?
All over the world, cities are frantically attempting to contain the virus.
Yesterday came the news that 10 cities in northern Italy had closed all public venues due to a new cluster of coronavirus patients. The towns, in the Lombardy region, have shuttered restaurants, stores, and schools. Public gatherings like carnival celebrations, church masses, and sporting events have been banned for at least a week.
In one town, Casalpusterlengo, an electric sign reads, "Coronavirus: the population is invited to remain indoors as a precaution." Seventeen people in the region have tested positive for Covid-19, and two have perished there from the illness.
Millions of people in South Korea have been told to stay at home. Preschools have been closed and public gatherings and demonstrations have been banned.
Thousands of people in the United States are under voluntary self-quarantine, not to mention the hundreds who have been repatriated and put into mandatory quarantine. Obviously, unless these folks have jobs to which they can telecommute, they're not working.
All of these containment measures are certainly wise and in the best interest of peoples' health. But what about their bank accounts?
Here's a scenario that's seeming less and less farfetched.
If you're the owner of a physical business like a store or restaurant, you're going to have to shut down under any of the kind of mandates mentioned above. When you're closed, of course, you're not making money. It's the same thing with factories (who will be there to produce the goods?) and offices. Your business will grind to a rapid halt.
And what about employees? Obviously, if you don't go to work, you're not going to get paid. And this isn't just a case of "evil capitalists" who are too stingy to give their employees paid leave. If the business is not running, there is no revenue coming in. That means that even if the business owners were the most generous people alive, they probably couldn't afford to maintain payrolls for very long.
So how are you going to pay your bills? It's safe to expect that the mortgage company, the credit card companies, the utility companies, and all those other businesses with their hands out each month are still going to want their money. And their businesses could potentially carry on to some degree, remotely.
That stuff isn't just going to magically disappear. You're going to owe that money. Even if companies try to work with folks as they did during the most recent government shutdown, the money will still be owed and you'll still be unpaid for a week, a month, or however long you were out of work.
This doesn't include the cost of food, medication, general expenses, and medical bills - heaven help you if you do get sick.

Be ready for the long haul.
This is a crisis that could have snowballing repercussions and they could last for a very long time. Hopefully, it gets contained and blows over without affecting us too badly. Hopefully, we get lucky and in a few years, the Covid-19 outbreak warrants the same eye-roll that the 2014 Ebola scare does.
But if it doesn't - if the scenario described in this article comes to pass - you need to be prepared for a long-haul. You need to be ready for your lifestyle to change fairly dramatically. A loss of more than a trillion dollars from the global economy isn't something that we'll bounce back from with "business as usual."
- Jobs will be cut as businesses struggle to stay afloat.
- Businesses will fail.
- Properties will not sell.
- Shortages of food and other supplies will occur.
If people are unable to pay back debt, expect a banking crisis that makes 2008 look like a rainy Sunday afternoon.
The same measures taken to contain the virus can cause these economic effects.
...experts like Richard Schabas, Ontario's former chief medical officer, worry that draconian measures that stoke fear in the population do more harm than good.
"Recessions kill people, in fact will probably kill more people than this virus does," he told CBC News host Michael Serapio last week...
..."Our world has become so interconnected," says Jia Wang, deputy director of the University of Alberta's China Institute.
Wang suggests that the next few weeks will be critical, showing whether the epidemic, with its global economic impact, is moderating or getting worse...
...Fear and government restrictions mean people in China have been staying home, slashing the business of retailers and restaurants. Some reports say property sales are down by more than 80 per cent, affecting a business that represents about one-quarter of China's gross domestic product.
Wang says that while the country's giant companies are big enough to outlast the crisis, especially with government help, a significant and dynamic part of China's economy is based on much smaller businesses that could disappear, leading to lingering economic effects.
"If the quarantines and shutdowns of many cities around China continue for a few more months or even just one month, many of the smaller companies may not survive," she said.
Wang says there are also worries that the coronavirus and its economic effect will spread outside China. Last Friday, Singapore's president, Lee Hsien Loong. warned the disease could push that country into recession.
Putting a figure on the global impact is not easy, and estimates of the damage vary widely. Oxford Economics says global growth will fall to 2.3 percent in 2020, the lowest level in more than 10 years and below the IMF's global recession level.
Currently, it's impossible to predict how far this will spread and how bad it will be. There's no way to know how long quarantine and containment measures will be put into place, or even if they'll be necessary.
But be ready for anything, economically speaking. Covid-19 is the wild card that nobody expected.
Originally published at The Organic Prepper - reposted with permission.