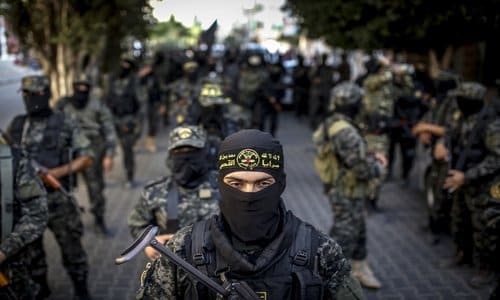 By Steve Emerson/Algemeiner.com February 27, 2020
Share this article:
Despite recent Israeli concessions to Palestinians in Gaza, terrorists escalated attacks against the Jewish state over recent days. On Sunday, two Palestinian Islamic Jihad (PIJ) operatives planted an improvised explosive device on the Israel-Gaza border.
Israeli soldiers saw them and opened fire, killing one of them and wounding the other. Using a bulldozer, the military retrieved the body to keep as leverage in negotiations for two Israeli men and the bodies of two Israeli soldiers held in captivity.
Throughout Sunday and Monday, Gaza-based terrorists -- mainly the PIJ -- indiscriminately launched dozens of rockets at Israel.

Following an initial missile onslaught, Israel responded by targeting PIJ terrorist infrastructure in Gaza and Syria. It is rare that Israel targets the Damascus-based PIJ leadership, Iran's main Palestinian proxy. Israel's retaliation can also be viewed as part of its broader campaign to degrade and destroy pro-Iranian elements seeking to entrench their positions in Syria.
Israel has been preparing to face repercussions for escalating strikes against Iranian targets in neighboring countries. Israel "will regret" its attacks, which "will not pass without a response," a senior adviser to Iran's supreme leader warned last month.
Israel is suspected of recently escalating strikes against increasingly emboldened Iranian proxies and partners around Syria's eastern border and even inside Iraq itself, signaling a major shift in Israel's strategy.
Most of Israel's strikes against Iranian allies in the region have focused on Iraqi Shia militias or Lebanese Hezbollah. Targeting PIJ's leadership in Syria sends another strong signal that Israel's adversaries are not immune to retaliation irrespective of where they reside.

As PIJ escalated rocket fire, Israel targeted several PIJ bases in Gaza including a team reportedly setting up to fire rockets. Four terrorists were injured as a result. Throughout this flare-up, Israel has carefully targeted militant infrastructure and personnel. Palestinian terrorists, on the other hand, indiscriminately target Israeli civilians in an effort to spread fear across Israeli society.
Beyond trying to coerce further concessions from Israel, the PIJ is also driven by internal organizational dynamics. As Israel and Hamas continue to seek a longer-term ceasefire, largely through Egyptian mediation, the PIJ feels sidelined among the wider Palestinian national movement.
The PIJ is either trying to strategically spoil ongoing negotiations or force Hamas into a war it does not want to fight or both. Palestinian terrorism against Israelis is often a product of infighting among competing factions -- a competition over who can challenge Israel most effectively in an effort to lead the Palestinian constituency.
In November, Israel assassinated the PIJ's de facto leader in Gaza, Baha Abu Al-Ata, after he orchestrated numerous attacks against Israel that year, including a barrage of rockets in May. Unlike Hamas, PIJ is not responsible for governing the Gaza Strip and rejects Hamas' efforts to reach a longer-term deal with Israel. After the targeted killing, PIJ launched more than 360 rockets at Israel.
Similar to the previous round of fighting, Hamas chose to stay out of this week's conflict. That decision may erode its image as the main challenge to Israel and exposed Hamas' difficulty in reining in rival Palestinian terrorist activities in Gaza. Beyond challenges from within the Palestinian national movement, Hamas faces growing dissatisfaction with its rule among Gaza's residents, who it actively represses using brutal means.

To distract its constituency and challenge Israel, Hamas also sets the tempo for near-weekly border demonstrations that involve violent attacks and terrorist infiltration attempts. The killing of a PIJ operative planning to bomb Israeli soldiers is the latest terrorist fatality at the volatile Israel-Gaza border.
From March 2018 through mid-2019, approximately 187 Palestinians were killed at the Israel-Gaza border -- 150 (80%) of whom were members or affiliates of terrorist organizations. About half of those killed are either associated with Hamas or are full-fledged members. Several others were affiliated with rival Palestinian groups, including the PIJ.
If the PIJ continues to provoke Israeli retaliations, Hamas leaders may feel as if there's no choice but to join their Palestinian rivals or risk being viewed as Israeli collaborators.
A ceasefire was agreed to late Monday night. Minutes later, however, terrorists started firing more missiles at southern Israeli communities. Tensions remain high, as several Israeli leaders warn that a full-fledged war may erupt if rocket fire persists.
Originally published at Algemeiner.com - reposted with permission.