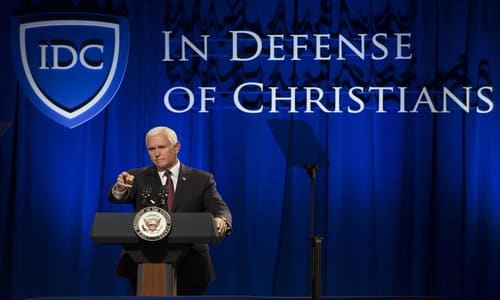 By Tony Perkins/Family Research Council March 03, 2020
Share this article:
The Left seems to love creating hysteria and mocking Bible-believing Christians -- so they couldn't have asked for a better gift than the coronavirus.
Not only does it give the media a chance to fuel the fear and fill headlines, but it's also given them a chance to take another whack at Vice President Mike Pence. Not because he's done anything wrong, of course. But because of what he believes.
When a picture circulated of the vice president praying with his coronavirus emergency team, extremists saw the opening and pounced.
After a week of bashing Pence for not having the experience to lead the response, liberals went ballistic at the idea that the man in charge of America's task force would "waste time" praying. "We are so screwed," Thomas Chatterton Williams posted.

Others were upset that he'd dare to bow his head with other agency heads. But one of the worst responses had already come from CNN's Don Lemon, before the picture, when he argued, "Is that the person you want in charge of the coronavirus outbreak?
Someone who needs to pray on something instead of looking at science? ...I don't have a problem with praying. I have a problem with someone who is allowing people to die because he doesn't want to look at science and to save lives."
First of all, who said the Vice President isn't looking at the science? Just because the vice president is a Christian doesn't mean he's ignoring the research. On the contrary. The people who say faith is incompatible with science or health care either don't have a grasp of history or are intentionally ignoring it to fit their narrative.
Throughout the human experience, Christians have been behind the discovery of some of the world's most important vaccines and treatments. Not only that, but the entire hospital network in this country -- and others -- is dominated by the Catholic church and other religious affiliates.
To suggest that religion and science are mutually exclusive is not only ignorant -- but insulting.
"The entire country," Mike Huckabee argues, "should have found it reassuring when the president appointed Vice President Mike Pence to coordinate the Trump administration's coronavirus response efforts. [He] has direct experience with this type of work, having overseen Indiana's public health system as governor in 2014 when the first U.S. case of the MERS (Middle East Respiratory Syndrome) virus [a deadlier version of the coronavirus] emerged in that state."

The Left is ridiculing him to get a political advantage, President Trump argued, "but this shouldn't be a political thing." He's right. Nor, Rep. Greg Murphy (R-N.C.) pointed out on "Washington Watch" with guest host Rep. Jody Hice (R-Ga.) should any of us be panicking to begin with. A medical doctor himself, Murphy has watched the coverage spiral out of control, when, he explains, "The lethality rate here in the United States are actually outside of China has been less than one percent. So it is not nearly as lethal as the other viruses that have been encountered."
People need to worry more about getting the flu, Dr. Murphy insisted. "The regular old flu. That doesn't mean we shouldn't be cautious and smart. But it does mean we shouldn't overreact.
"We're going to have to change our habits a little bit. But there is no reason whatsoever for panic. You know, a lot of people have put a big rush now on getting face masks. Those are totally not necessary. The face masks do... nothing to prevent somebody from getting the virus. What they do is if somebody has the virus, it decreases the amount of secretions that they actually push out. So, again, it really goes back to basic techniques of just making sure you're washing your hands and... [decreasing] the amount of human contact, handshaking, those kind of things in the next few months. And hopefully, this will not nearly be the calamity that some are screaming that it's gonna be."
As for Don Lemon's comments that Mike Pence isn't qualified to deal with this because he has faith, that's "flat-out absurd."

"You know, people have said, 'What does he know about science? What does he know about infectious disease?' He doesn't have to know anything about them. A leader is someone who gathers around them smart individuals of different areas of expertise and helps coordinate a response... And that's what he is doing... He will have doctors in the room. He'll have epidemiologists. He'll have hospital administrators. He'll have military in the room, all putting their heads together and their areas of expertise together to continue to mount a response to this problem. So that that's irresponsible reporting. And when it comes to prayer," Rep. Hice went on, "for crying out loud, you know what? I want people praying for our country and for protection on this. And the more the better as it comes to addressing what could be a pandemic type scenario in our country."
Originally published at Family Research Council - reposted with permission.