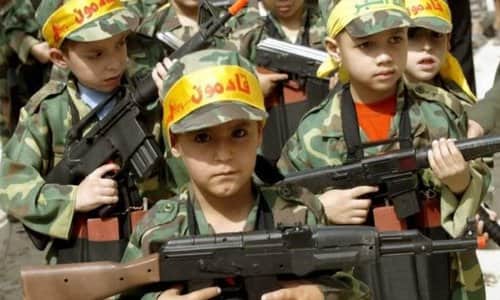 By McKenna Bates/algemeiner March 09, 2020
Share this article:
There are many things about the Israeli-Palestinian conflict that the media focuses on, and almost all are bad about Israel.
However, a few things that really should be focused on tend to be swept under the rug and ignored. Now, however, a new advocacy campaign intends to spotlight one of those things: Palestinian child soldiers.
This new campaign attempts to expose the plight of Palestinian children, who are often used as emotional and physical leverage, and even as vessels through which to fight the IDF.

According to The Jerusalem Post, over 30 Palestinian children and teens were enlisted in stabbing attacks against Israelis from 2015-2016; 29 Palestinian children have been successfully used as suicide bombers (with a few dozen more attempts being thwarted); and over 17,000 Palestinian children were recruited into Hamas child militia programs in 2019.
Palestinian children are encouraged to be the main force throwing rocks and other objects at Israeli soldiers, and to stand in front during protests that very often turn violent.
More horrible still, the average pay that a child (or their family guardian) receives for such work is only $83.
Utilizing children as human shields and as bomb carriers is unethical and abhorrent, and yet this issue is rarely talked about or brought up, except in the effort to demonize Israel.
The world watched as Ahed Tamimi was released from detainment, but very few news sources questioned why she was there in the first place.
Very few blinked when it was discovered that UNWRA had approved textbooks that included rampant incitement, blood libels, and blatant propaganda for use in schools in Gaza, the Palestinian territories, and even East Jerusalem.
And the many Palestinian children's television programs that call for violence against Jews and spread propaganda continue to be aired with little scrutiny.

It's time to expose these horrible practices, and educate the public about the real situation in Israel.
The hope is that if this issue is brought wholly into the public discourse, real change can be enacted, and more Palestinian children can be saved from their horrible fates.
For if we all truly do care about the plight of Palestinian children, we'll call out the abuse that their own government forces upon them and try to change their situation for the better.
Originally published at The Algemeiner - reposted with permission.