Arizona Fights Democrats To Keep Men Out Of Womens' Sports 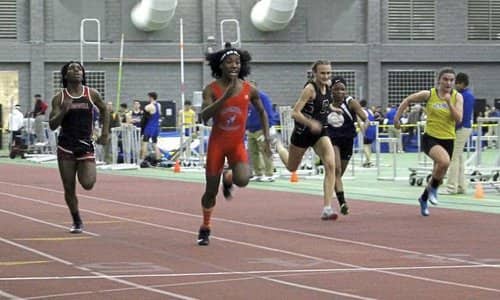 By Tony Perkins/Family Research Council March 09, 2020
Share this article:
Ten years ago, it might have taken six minutes to debate a bill like this -- if there was any debate at all. But this is 2020, when the conversations about something as straightforward as gender takes as many as six hours.
Now, instead of overwhelming consensus on an issue that wouldn't have been an issue before, the margins are razor thin. Just how far has the cult of transgenderism gone?
Not a single Democrat in the Arizona House voted Wednesday to protect women's sports. Fortunately for the state's girls, every Republican did -- and the only hope for school athletics moved on to the other chamber.

"This bill is about fairness," State Rep. Nancy Barto (R) argued. "That's it. What's fair on the field, the court, the track, and in the pool..." Barto, like a lot of moms, is sick and tired of people trying to turn the debate over girls' sports into something it's not.
She sat on the House floor this week, listening to the other side twist and distort what her bill does for almost an entire working day. "We separated male and female sports for a reason," she insisted. "Biological differences." That's not mean or intolerant -- that's reality.
As the mom of three girls, she understands the frustration of teenagers like Grace, who are being forced to play softball against members of the opposite sex. Grace used to trusting the competitive system.
Now, she's realized, "I cannot trust an equal playing field in Arizona." She talked about walking onto the field and how deflating it was to face a male player. "Sure enough," she testified, the "opposing team won. The boy gave them an edge, both physically and mentally that we could not match... It's not right that years of hard work can be wasted; games, championships, and titles lost; and coveted spots on top teams gone -- and the results known even before we take the field."
Under Barto's legislation, every K-12 school, every community college, and state universities would no longer let biological males compete on girls' teams. "This bill is not anti-anything. It's pro-woman and pro-girl." State Democrats disagreed, blasting Barto for "policing gender" and being insensitive to trans-identifying kids.

But the bill's sponsor wasn't about to back down. "Opponents continue to ignore the elephant in the room -- the innate biological differences between the sexes -- and instead are ginning up the political rhetoric with name-calling as if the bill is anti-trans or LGBT -- but that's simply not the case. Even many trans individuals and liberal feminists agree that a level playing field for women's sports must be preserved to ensure the future of Title IX and women's athletic and educational opportunities. It preserves privacy and it preserves sports opportunities for everyone -- in the appropriate sex classifications."
In the end, the bill passed -- no thanks to Democrats, who voted to end all the progress women have made in the last 50 years. But Arizona Republicans aren't alone in their rush to protect girls from the .6 percent of the population trying to destroy half of the sporting world.
A whopping 18 states are moving similar proposals forward, desperate to stop the bleeding before talented girls lose more championships, scholarships, and promising futures.

But if they're looking for an ally in Nike, forget it. The retail giant, who's becoming the far-Left's most reliable activist (when it isn't busy oppressing China's Uyghurs, that is), sent a trans-identifying athlete to testify against a similar bill in Idaho as a spokesperson of the company!
Apparently, one of the biggest manufacturers of sports equipment doesn't mind alienating half of its market. Like most of Big Business, their progressive feminist cred is just a front to pursue the most radical LGBT policy there is.
And if softball players, foster kids, and persecuted minorities are the collateral damage, so be it.
Originally published at Family Research Council - reposted with permission.