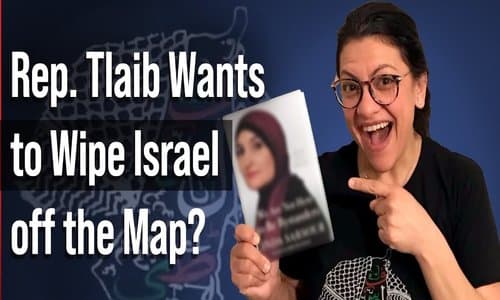 By Jackson Richman/JNS.org March 12, 2020
Share this article:
Rep. Rashida Tlaib (D-Mich.) has been seen wearing a T-shirt of the State of Israel replaced with a Palestinian state.
"Stand in solidarity with Palestine by wearing this beautiful Palestinian tee-shirt," reads an online purchasing description about the shirt. "An outlined map of Palestine is filled with red, white and green Arabic letters that look stunning from a distance and spell the word Palestine up close. A patterned shemagh wraps around the neck of the Palestinian state like the brave soldiers whose boots stand on the dusty ground."
Republican Jewish Coalition spokesperson Neil Strauss told JNS, "Her tee shirt shows her support for wiping Israel, and it's nearly 7 million Jews, off the face of the earth. Her anti-Semitism knows no bounds."

The Jewish Democratic Coalition of America did not respond to a request for comment.
In the same photo, she is also shown displaying the newly released book by Linda Sarsour, who was removed from the leadership of the Women's March movement for her anti-Semitic, anti-Israel rhetoric.
Since entering Congress in January 2019, Tlaib has been accused of peddling an anti-Israel and anti-Semitic agenda, starting with displaying a map in her congressional office with a note posted over Israel that reads "Palestine."
Shortly thereafter, she attacked Republican lawmakers and opponents of the anti-Israel BDS movement by saying "they forgot what country they represent."
Tlaib met with Hezbollah supporter Abbas Hamideh, who has said that Israel is a "terrorist entity," even though the congresswoman said that "I do not agree with the statements brought to my attention."
In May, she said that Palestinians enabled a "safe haven" for Jews after the Holocaust, thereby reiterating her support for a one-state solution.

During her keynote address at the American Muslims for Palestine conference in Chicago in December, Tlaib compared the situation at the U.S.-Mexico border to that of Gaza and Israel and said that she's advocating for clean water in her Michigan district and "fighting for clean water in Gaza."
AMP is an anti-Israel group that supports the BDS movement and was founded by Hatem Bazian, who co-founded Students for Justice in Palestine.
On Feb. 29, Tlaib addressed the annual gala as the guest of honor for the Missouri chapter of AMP. She was joined by the gala's keynote speaker, AMP national policy director Osama Abuirshaid, who has expressed support for the U.S.-designated terrorist group Hamas and BDS.
Originally published at JNS.org - reposted with permission.