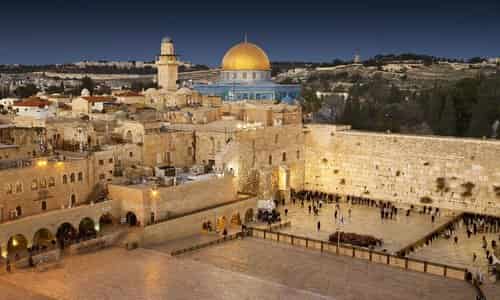 By Dror Eydar/Israel Hayom June 06, 2016
Share this article:
In the end, it all comes down to Jerusalem. We can talk about "two states" and "diving the country" and "an end to the occupation" (of course, of course) -- but eventually Jerusalem will rear its head.

The same old bunch, which for 49 years has been tempting us to bid farewell to the land of our life, needs to give an answer about what it suggests we do about Jerusalem. Not Issawiya or Beit Safafa or all the rest, but the four quarters of the Old City, including the City of David, which lies south of the Temple Mount and outside the current wall.
"Ask for the peace of Jerusalem," the poet commanded in Psalms (122:6). Ask the devotees of division what they think should be done about the city whose memory brought us here. Anyone who isn't willing to share it with strangers in effect forgoes whatever purpose there might be to diplomatic negotiations. No Arab will agree to any peace plan without full Muslim control of east Jerusalem.
The idea of internationalizing the city; dividing it into quarters; sharing control, with the Jews in charge below and the Muslims in charge on top of the Mount, are mere chatter -- fairy dust and daydreams of Western countries and some (few) Israeli Jews.
Don't let those of us who want to pull the wool over people's eyes talk about "dividing the country" -- get straight to the cherry on the icing: the Old City of Jerusalem.
Even if the Romans could make the name of the land of Israel and Judea vanish from world memory starting from the second century C.E. by calling it "Palestina" after the seafaring Philistine people who had disappeared from here hundreds of years earlier, their plot to erase Jerusalem and rename it "Aelia Capitolina" didn't succeed.
To the regret of our enemies and those among us who deny the redemption, more than 1,900 years have passed, and the world still calls the heart of our nation "Jerusalem." Even the Muslims, who are fighting to rewrite the history of the city and deny our ties to it, are forced to refer to it as "Al-Quds," as an acronym for "Beit al-Maqdis" (Home of the Temple) and in doing so reveal the lie they are seeking to spread.
In honor of the 49th Jerusalem Day, which marks the city's liberation and its unification with its legal sons and daughters, yet another of the thousand "peace conferences" convened in Paris to "cast lots" upon Jerusalem (Obadiah 1:10).

It's been nearly 100 years since the Sykes-Picot Agreement, which mapped out the Middle East and is now collapsing before our eyes, and the French and other nations are trying to revert to that historic march of folly.
French President Francois Hollande uttered one sentence that caught my attention: "We must work to realize that in the regional context and diplomatic vacuum will be filled by extremism and terror." I thought to myself that this was a wonderful explanation of the lack of historical understanding expressed in the summit.
Because this is what could happen if a Palestinian state is established under current geopolitical conditions: it will be a "diplomatic vacuum" that in light (or darkness) of our bad experience would indeed "be filled with extremism and terrorism." Just look at the chaos around us.
As long as Jerusalem was just a dream or a longing, we were satisfied with missing it, even during the first 19 years of the state, when its heart was walled off. But from the time we were privileged to liberate the city and apply our sovereignty to it, we must not let it slip from our hands.
Giving up Jerusalem, heaven forbid, would hurt the entire historic process of the return to Zion. Because there is no Zionism without Zion, and just as there is no Zionism without the land of Israel, there is certainly no meaning to us returning to the land of Israel without the city that held us up in the desert of the nations through our oath to remember it and whose name brought us home.
Originally published at Israel Hayom - reposted with permission