The Purging Of The Last Pro-Life Democrats 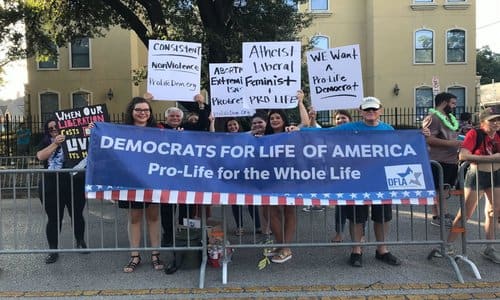 By Jonathon Van Maren/Bridgehead.ca March 19, 2020
Share this article:
Despite the coronavirus pandemic, the American abortion wars have continued unabated. Last night, for example, one of the last pro-life Democrats--Representative Dan Lipinski of Illinois's Third Congressional District--lost his primary race to pro-abortion challenger Marie Newman.
Newman had campaigned explicitly on the premise that Lipinski is not a real Democrat, and that there is no room for the old-fashioned economic liberals with socially conservative views in the new Democratic Party.
The purge of pro-lifers has been ongoing for years--prominent pro-lifer liberal and theology professor Charles Camosy finally abandoned the party over its abortion extremism last month--but this is still a significant blow.

Earlier this week, of course, we had the debate between Bernie Sanders and Joe Biden, where both promised to give the abortion industry everything they've ever wanted, from codifying Roe in law to repealing the Hyde Amendment and funding abortions with taxpayer dollars.
Biden has a reputation as a moderate simply because he's so old that he is too familiar to be scary to most people, but on abortion, he's about as moderate as Cecile Richards. If he ever did have any Catholic qualms about abortion, he's killed them.
In Utah, meanwhile, pro-abortion legislators stormed out of the Legislature when two pro-life bills were passed. A ban on nearly all abortions, which would take effect in the event that Roe is overturned, passed this month, as well as regulations on the treatment of the corpses of aborted babies.
Another bill, on mandatory ultrasounds, died in the House when the leadership refused to call the bill for a final vote on an amendment before the closing of the session. Utah already has more than thirty restrictions on abortion, and abortion activists intend to call for vetoes.

On another note, abortion activists are warning that the coronavirus pandemic could eliminate access to abortion in some areas. A Texas abortionist who is currently self-quarantining warned that "it could have a huge impact. There are not that many doctors who provide abortion care in Texas.
A lot of the doctors that do come in are from out of state. In a situation where doctors are less likely to want to travel, if there's no one to cover me, patients will have to wait." Further, the Huffington Post noted, "reproductive rights groups warn that the spread of coronavirus could cripple abortion services, especially in places where access is already tenuous. Six states have only one remaining clinic apiece. In many rural areas, clinics are staffed by travel doctors who fly to multiple locations to see patients."
As many pro-life groups are forced to scale back public outreach in our fresh new era of social distancing, it is a relief to discover that the abortion industry is being hard hit by this.
Abortion activists are not above taking advantage of the crisis to further their horrific agenda (Nancy Pelosi reportedly tried to include a method of using federal funds to pay for abortion in the coronavirus economic stimulus bill), and one even used the opportunity to call for the total elimination of all abortion restrictions:

"The absolute, most 100% PROLIFE thing we can do now is strip away all barriers to abortion immediately. It will save the lives of people who will try to self manage without safe meds. It will stop the spread of virus by cutting unnecessary travel. IT. IS. SAFE. MAKE. IT. LEGAL."
Shredding and dismembering a child in the womb, of course, will never be safe--pandemic or no pandemic. What this activist is advocating for is to make it safer to kill children and ensure that in many places, the womb continues to be the most dangerous place for a child to be.
Originally published at The Bridgehead - reposted with permission.