LGBT Activists Slam COVID-19 Aid - Because It's Run By Christians 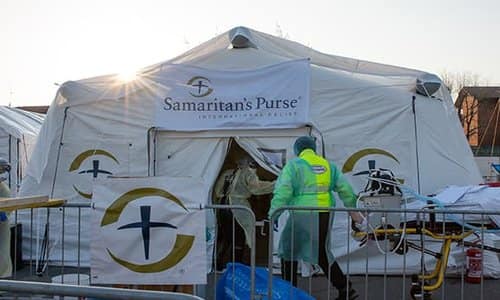 By Jonathon Van Maren/Bridgehead.ca April 06, 2020
Share this article:
As New York City becomes the epicenter of the coronavirus pandemic in the United States, the city is going into lockdown. Frontline healthcare workers are preparing for shortages of beds and equipment, and the USNS Comfort, a massive hospital ship, has arrived to help deal with the influx of patients.
Samaritan's Purse, a Christian humanitarian organization that, among other things, brings medical professionals and supplies to war zones and disaster hotspots around the world, has set up a 68-bed field hospital in Central Park with 60 to 70 medical staff to treat coronavirus patients.
The arrival of Samaritan's Purse was heartily welcomed, especially as they managed to set up an overflow hospital to relieve the strain on packed Manhattan hospitals. Solidarity is essential, and in the face of the pandemic, differences have been put aside in order to save lives and assist exhausted frontline workers. Mt. Sinai Hospital has stated that these extra beds are desperately needed.
At least, that is what you would hope.
Almost immediately after the news began to spread that Samaritan's Purse was setting up a field hospital, LGBT activists and progressive journalists began to condemn the humanitarian organization for being based on the very Biblical principles that spur their life-saving work.

Judah Robinson, a reporter and producer with Now This News, tweeted out a photo of volunteers setting up a huge tent with the caption: "The makeshift hospital in Central Park is being built and run by Samaritan's Purse, the relief organization run by the notoriously anti-LGBTQ+ minister Franklin Graham."
The mainstream media soon picked up the story, with NBC running the headline "Group behind Central Park's COVID-19 field hospital run by antigay evangelist." The field hospital, NBC reported, "has raised eyebrows because of a request for 'Christian' volunteers and a policy that volunteers adhere to its 11-point Statement of Faith. Ten of the 11 items pertain broadly to doctrinal issues, including one that 'human life is sacred from conception to its natural end.'"
Predictably, it wasn't the pro-life position of Samaritan's Purse that was the most offensive to those complaining about a relief organization that set up a field hospital in a handful of days.
It is the fact that Samaritan's Purse is a Christian organization, and thus has a Christian position on sexuality: "We believe God's plan for human sexuality to be expressed only within the context of marriage, that God created man and woman as unique biological persons made to complete each other...God instituted monogamous marriage between male and female as the foundation of the family and the basic structure of human society. For this reason, we believe that marriage is exclusively the union of one genetic male and one genetic female."
A few years ago, this would not have been remotely controversial.
In 2020, however, with New York City facing a massive health crisis, New York state Senator Brad Hoylman put out a statement calling on Rev. Franklin Graham to "publicly assure LGBTQ New Yorkers that they will receive the same treatment as anyone else at the Central Park field hospital."
This statement was a vile attempt to simultaneously smear and virtue-signal, as everybody is fully aware of the fact that the medical professionals with Samaritan's Purse treat everybody they can, and that there is no religious test to determine who gets treatment.
In an emailed statement to NBC News, Graham showed remarkable restrain in his response: "Samaritan's Purse treats everyone we help the same. We do not make distinctions about an individual's religion, race, sexual orientation, or economic status.
We certainly do not discriminate, and we have a decades-long track record that confirms just that. This is a time for all of us to unite and work together, regardless of our political views. Let's support one another during this crisis, and we pray that God will bless the efforts of all those battling this vicious virus."
Hoylman, who is gay, responded by telling NBC News that it is "a shame that the federal government has left us in the position of having to accept charity from such bigots. This health crisis is too delicate to leave to televangelists, purveyors of faith, to handle our medical needs."
City Council Speaker Corey Johnson joined Hoylman's condemnation, stating that it is "extremely disturbing" that Samaritan's Purse has been permitted to set up a field hospital and warning that he will be "monitoring the situation closely and making sure our city's values are being represented at all times." Mayor Bill de Blasio told the media that he was "very concerned" about the values of Samaritan's Purse.
These New York politicians, it seems, are too ignorant to understand that medical professionals will be treating the pandemic patients, not Graham personally. They also appear to miss the irony of the fact that Samaritan's Purse is necessary because of the failure of local politicians like themselves (who conveniently blame the federal government in order to deflect responsibility.)

And in all of this, they reveal once again that they are small-minded, bigoted, and silly men: So ignorant that they do not understand the Christian faith that has animated charity work and transformed societies for 2,000 years, and so hate-filled that they find it "disturbing" that Christian volunteers are permitted to step in and save lives.
They point to Franklin Graham's defense of the human family as it has been defined throughout the history of Western Civilization, and they call him a vicious bigot.
But who, really, are the hateful ones here?
The values of Franklin Graham and Samaritan's Purse drive life-saving charitable work around the world, from Burma to Iraq to New York City. The values of Hoylman and Johnson are so bigoted that they would rather see medical professionals saving lives during a pandemic told to stand down rather than risk having a life saved by doctors and nurses who are insufficiently enthusiastic about the sex acts they happen to like.
It is not about love or compassion for these people. It is about forcing people to support their lifestyles--no matter what. After all, it was people of this ilk who attacked the Salvation Army for much the same reason.
But these New York politicians and their LGBT activist allies are fortunate. If, God forbid, they contract COVID-19 and need medical attention, the Christian medical professionals of Samaritan's Purse will be happy to treat them and restore them to health.
If they knew understood anything about Christianity, they'd know that already.
Originally published at The Bridgehead - reposted with permission.