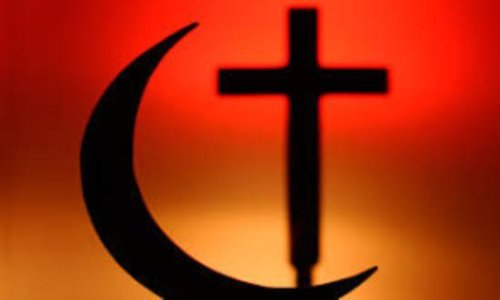 By David Sidman/BIN April 07, 2020
Share this article:
As Catholic churches in Ireland remain empty due to the latest health measures, one Catholic priest thought it would be a good idea to invite descendants of Ishmael for a joint prayer service.
And although the prayer was supposed to be for health care workers, the Muslims exploited the Church's hospitality to proclaim Islamic supremacy over the Christian (and Jewish) religion from the pulpit.
Muslims, were invited by a Catholic priest in County Mayo, Ireland to pray alongside him during the celebration of the Holy Eucharist.

During the procession, the Muslims recited the Adhan prayer-- the Islamic call to prayer that categorically proclaims Islam's supremacy over its forebears -- Judaism and Christianity reports Church Militant.
Father Stephen Farragher, parish priest of St. Patrick's Church in Ballyhaunis, County Mayo, invited two Muslim men to "pray in solidarity" with him "the final blessing and prayer" at the Friday morning Mass.
The joint prayer was to be broadcast on Irish radio.
Mohammed Cherbatji and Mohammed Rahmani accepted Fr. Farragher' invitation to recite a prayer for health care professionals and emergency workers during the coronavirus pandemic. They also prayed for the eradication of the Chinese virus.

But a video of the Muslim prayer released on Twitter featured one of the Muslims in the pulpit reciting the Adhan prayer in Arabic.
And according to an Islamic scholar contacted by Church Militant: "this prayer was not a blessing for health care workers at all but rather the "Islamic call to prayer, which conclusively and unambiguously asserts that God's revelation to Muhammad has supplanted and superseded God's prior revelations to Moses in the Old Testament and to Jesus in the New Testament."
The Adhan asserts: "Allah is the greatest. I bear witness that there is no god except Allah. I bear witness that Muhammad is the Messenger of Allah. Come to prayer. Come to salvation." These affirmations are repeated twice.
Originally published at Breaking Israel News - reposted with permission.