Dangerous Ground: NY Gov Boasts We Flattened The Curve - 'God Did Not Do That' 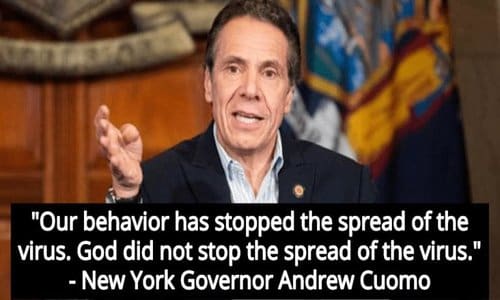 By Jonathon Van Maren/Bridgehead.ca April 15, 2020
Share this article:
The scenes coming out of New York City over the past two weeks have been surreal: A field hospital in Central Park; one of the world's largest financial centers on lockdown; Men and women wearing masks outdoors, in many cases for the first time since 9/11; yesterday, the death toll for the state surpassed 10,000, and aerial photographs of a deep trench with Bobcats stacking plain wooden coffins in rows blew up social media.
In fact, New York City has contracted laborers to bury unclaimed victims of the coronavirus pandemic on Hart Island, which has functioned as the city's potter's field since the 1800s for unidentified bodies or those too poor to arrange a formal funeral.

According to Jason Kersten of the Department of Correction, which typically oversees inmates burying the coffins, about two dozen corpses per day are being buried on the island, five days a week. Previously, the number had been around 25 per week.
The fact that all of this is happening in New York City--not in some developing country, but in the United States of America--is somewhat hard to fully grasp.
These tent hospitals, medical volunteers, mass house arrests, masked inhabitants?
The city with so many dead that a deep trench was needed to serve as a mass grave and extra laborers had to be employed to bury the discount coffins? New York City, not Mogadishu.
You would think, considering all of that, that the COVID-19 pandemic would be a tremendously humbling thing.
Many New Yorkers, it goes without saying, do not believe in God (this is a city with one of the highest abortion rates in the world.) But Governor Andrew Cuomo, who self-identifies as Roman Catholic, certainly claims to.

In this time of turmoil, tumult, and terror, many world leaders--from President Donald Trump to the president of Ghana--have called formal days of prayer and fasting to ask God for relief from the pandemic.
States have followed suit. Iowa declared a day of prayer. So did South Dakota. Governor Andrew Cuomo, on the other hand, has responded quite differently.
On Easter Monday, during a press conference, Cuomo signaled cautious optimism about the ongoing situation in New York.
With the numbers beginning to level off--"18,000, 18,000, 18,000...the numbers suggest a plateauing, slight increase, but a plateauing, which is what the experts have talked about. That's what the numbers say. I also say whatever those numbers say is a direct result of what we do. I've said if we do something stupid, you will see those numbers go right back up tomorrow, period. The worst can be over, and it is over unless we do something reckless."
That is easy to agree with. What Governor Cuomo said next, however, is not.

"The number is down because we brought the number down," he told the press. "God did not do that. Faith did not do that. Destiny did not do that. A lot of pain and suffering did that...That's how it works. It's math. And if you don't continue to do that, you're going to see that number go back up. And that will be a tragedy if that number goes back up."
That's a pretty bold statement coming from a governor presiding over a pandemic that is currently leveling thousands and filling a mass grave as things begin to slightly improve: "God did not do that."
Perhaps Cuomo is simply warning people not to abandon the measures that have assisted in "flattening the curve," or emphasizing the responsibility citizens have to public health.
But it also means that no matter how loudly God speaks, some of our leaders are refusing to acknowledge the total lack of control they have and the puniness of their power.
Originally published at The Bridgehead - reposted with permission.