How The Coronavirus Sets The Stage For The End Times 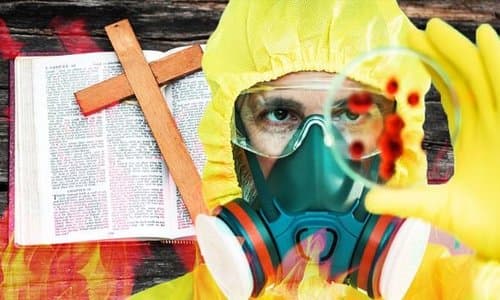 By Britt Gillette/End Times Bible Prophecy April 24, 2020
Share this article:
The current coronavirus outbreak is not an event prophesied in the Bible for the seven-year Tribulation. The world simply hasn't entered that time period yet. However, it is significant to bible prophecy, because it sets the stage for the near-term fulfillment of many end times bible prophecies.
This isn't surprising. Politicians take advantage of times of turmoil, disaster, and fear to implement changes people otherwise wouldn't accept. Here are just a few things to expect in the days ahead:
1) Calls for a Strong European Union Leader
As of this writing, the coronavirus has hit the United States harder than any other nation. However, if you count the European Union as a single nation and add up the case total and fatalities of all its member nations, the coronavirus has hit the European Union harder than anyone else.
Early on, EU leaders and many individual nations pushed back on the idea of closing borders. This allowed early infections in Italy to spread all over continental Europe. Many believe this could have been avoided with a strong executive.

With centralized authority, a single European leader could have closed borders and instituted a shutdown much earlier. Instead, each individual nation enacted its own policies. When the coronavirus pandemic ends, many will point to the EU's leadership failure and use it as an excuse to push for the creation of a strong executive office to head the EU.
This is the position many prophecy experts believe the Antichrist will hold. If it is, he will likely take charge of a more unified and powerful EU. Why? Because the coronavirus will likely lead to further unification of the EU.
2) Calls for Further European Union Integration
The coronavirus has devastated Italy. The fourth largest economy in the European Union, and the eighth largest in the world, the Italian economy has effectively been closed since March 9th. Unlike the United States, which can print money for business bailouts and stimulus checks, Italy doesn't control its own currency.
Like other EU countries, Italy uses the euro, and that means their national debt is denominated in euros. The only way Italy can pay its debts is to collect taxes. If the economy tanks, so does tax collection. This means Italy will soon be at the epicenter of a massive debt crisis.
Remember the Greek debt crisis? In 2010, Greece needed a €110 billion bailout. They couldn't make their debt payments, and they couldn't print euros. The prospect of default almost caused a second financial crisis, coming on the heels of the 2008-2009 recession. Yet Greek debt remains at unsustainable levels.
As of the third quarter of 2019, Greek debt was 178% of its gross domestic product (GDP) - the worst debt-to-GDP ratio in the EU. The second worst? Italy at 137%. But Italy's economy is ten times as big as Greece's economy. If Italy defaults on its government debt, some of the largest banks in Italy and Europe will become insolvent.

The event will send widespread financial contagion throughout the global financial system. The subsequent collapse of global markets will trigger one of the greatest economic depressions in history. One way to avoid this catastrophe? Do something many EU nations vowed never to do - share debt.
In other words, further integration and the creation of a United States of Europe. I believe this is inevitable, and I believe it will create the final world empire Daniel envisioned (Daniel 2, Daniel 7).
3) Calls for Increased Tracking of People
With shutdowns all over the world bringing the global economy to a standstill, calls are getting louder to re-open the economy and get people back to work. But how do you get people "back to work" without causing a spike in new coronavirus cases?
Some people are pushing a solution that involves increased tracking of people. They believe the government should track everyone's mobile phone. When someone gets the coronavirus, the government can easily retrace their steps and find everyone who came within a few feet of the infected person.
Then, they'll place those people in a mandatory quarantine. Some nations, such as South Korea, already do this. Other people favor giving "papers" to those who have recovered from the coronavirus. These official papers will allow you to travel in public or go back to work.
Some warn this is the road to authoritarianism, but it isn't. Once we do this, we'll already be there. This level of government control over the individual is no different than what we read about in Revelation 13.
4) Calls to Replace Paper Currency with a World Cryptocurrency
The use of paper currency has declined dramatically in this new era of online ordering and social distancing. Paper currency is a haven for bacteria and viruses, and it could accelerate the spread of coronavirus. Because of this, look for politicians to call for an end to using paper currency. Meanwhile, governments have struggled to quickly deliver stimulus payments to the unemployed.
This provides the perfect cover to implement a government-sponsored virtual wallet and cryptocurrency. Getting people to sign-up will be easy. They'll offer a few thousand dollars to everyone who signs up to the government's virtual wallet program. Once everyone signs up, the government will eliminate use of all currency except its own crytocurrency.

This will give the government detailed knowledge of every sale and purchase you're involved in. It will also give them the ability to control the terms and conditions of all those transactions. And if they don't like something you're doing? They can cut off access to your virtual wallet, locking you out of all commerce. The technology to implement this system already exists, and the Bible tells us it's coming.
It says the Antichrist will implement this system: "He required everyone -- small and great, rich and poor, free and slave -- to be given a mark on the right hand or on the forehead. And no one could buy or sell anything without that mark..." (Revelation 13:16-17).
5) Decreased Demand for Oil
The coronavirus has shut down factories, grounded airplanes, and caused a drop in the number of cars on the road. Global oil demand has fallen by 29 million barrels per day to a level last seen in 1995. The price of oil has fallen from around $60 per barrel at the beginning of the year to around $20 per barrel today after some crazy days of trading near $0. Needless to say, this has had an unprecedented impact on the global oil industry.
In March, OPEC attempted to coordinate a production cut with Russia. When Russia said no, Saudi Arabia responded with increased production. Some think their aim was to take market share, drive down prices, and force Russia back to the negotiating table. Others think their aim was to harm U.S. shale producers, many of whom can't survive at $20 per barrel oil.
Regardless of their true intent, Saudi Arabia's actions had a profound and negative impact on Russia. Earlier this month, they agreed to production cuts, but you can be sure Vladimir Putin is not happy. Losing a high profile oil price war and billions of dollars per day in oil profits won't be something he'll easily forget.
While Saudi Arabia has an advantage in oil reserves, Russia holds a greater advantage in the military realm. What will happen if Russia invades Saudi Arabia? The Middle East is home to approximately 40% of the world's proven oil reserves. If Russia controlled the Middle East, they could control the world's oil.
Only two nations stand in Putin's way - the United States and Israel. If a global depression, the rapture, or another major event changes U.S. policy in the Middle East, only Israel will stand between Russia and complete dominance of the global oil market. The high stakes incentivize Russia to team up with Iran and take out Israel. This will secure their collective grip on the region.
The Bible says this will happen. More than 2,600 years ago, Ezekiel revealed an alliance composed of Russia, Iran, Turkey, and other regional nations will launch a surprise attack on Israel from the north (Ezekiel 38-39). Since the launch of the Syrian civil war in 2011, we've seen each of the major players mentioned move their forces into Syria.
Russia and its allies currently sit on Israel's northern border, which is the direction from which Ezekiel said they'll attack (Ezekiel 38:15; Ezekiel 39:2). We've been watching God set the stage for this conflict for several years. The coronavirus-induced oil price war provides yet another reason to expect we're getting closer to seeing fulfillment of Ezekiel 38-39.
The End Times Approach
The word "coronavirus" doesn't appear in the Bible, and what we see now is not one of the events of the Tribulation. However, the coronavirus is one of the general signs Jesus said to look for, and it sets the stage for the rapture of the church and the arrival of the Tribulation. When asked to describe the signs of His coming, Jesus cited pandemics just like the one we're experiencing now as a major sign (Luke 21:11).
But this wasn't the only sign He said to look for. He said to look for the Jewish people back in the land of Israel (Jeremiah 23:7-8)... He said to look for the Jewish people once again in possession of Jerusalem (Luke 21:24-28)... And He said to look for the Gospel being preached to the ends of the earth (Matthew 24:14).
The prophets also said to look for signs. They said to look for: A time when travel and knowledge will increase (Daniel 12:4)... A time when Israel has "an exceedingly great army" (Ezekiel 37:10)... The rise of the Gog of Magog Alliance (Ezekiel 38-39)... The rise of a revived Roman Empire (Daniel 2, Daniel 7, Revelation 17)... The rise of global government (Revelation 13:7)... And the rise of a single global currency system (Revelation 13:16-17)... We see all of these signs today, and Jesus commanded us to watch for them. He warned us not to be found sleeping when the Master arrives without warning (Mark 13:36).
The coronavirus is God's wake-up call to those who have been sleeping. It sets the stage for the rapture of the church, the arrival of the Antichrist, and the Second Coming of Jesus Christ. Make sure you're not asleep!
Britt Gillette is author of the free ebook Coming to Jesus as well as the books Signs of the Second Coming & Racing Toward Armageddon.