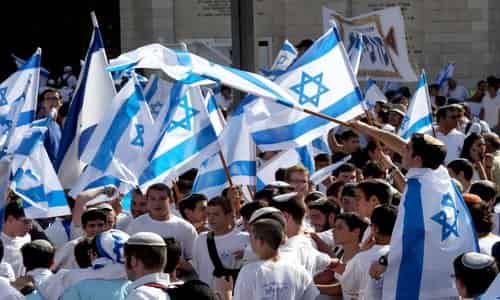 By JNS.org April 28, 2020
Share this article:
As Israel prepares to celebrate its 72nd birthday in just a few days, the country's population stands at nearly 9.2 million, according to data released by Israel's Central Bureau of Statistics on Sunday.
Israel grew by 171,000 people since last year's Independence Day, according to the CBS, with analysts predicting that Israel will be home to 15.2 million people by its 100th birthday in 2048. In the past year, 180,000 babies were born, 44,000 people died and 32,000 new immigrants arrived in Israel.

Israel's population was described as "young," with 28 percent aged 0-14 and 36.1 percent under the age of 19. More than 10 percent of Israel's population--nearly 950,000 people--are under the age of 4, while 0.6 percent are over the age of 90--approximately 55,200 people.
The average number of children aged 0-14 years in other OECD countries is just 18 percent.
Israel's 6.806 million Jews comprise 74 percent of the population, with Arabs making up 21 percent. An additional 5 percent are largely comprised of non-Arab Christians.
Today, 78 percent of Israelis are native-born sabras; however, 3.3 million people have immigrated to Israel since 1948, with 44 percent of them arriving in the past 30 years.