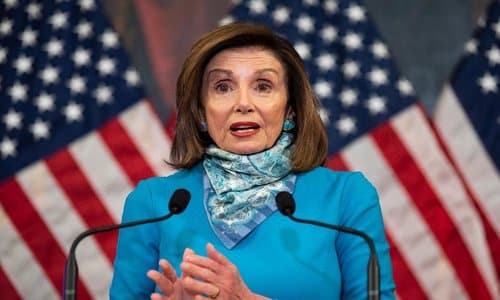 By Tony Perkins/Family Research Council May 18, 2020
Share this article:
If you could sit down and write a list of every bad idea the Left has ever had, guess what? You've got the House's Phase 4 coronavirus stimulus.
Picture Planned Parenthood loans, taxpayer-funded abortion, cash for illegal immigrants, marijuana banking, state bailouts, rigged elections, freed felons, and a complete redefinition of the family.
Clocking in at 1,800 pages -- more than three reams of paper -- the Democrats' bill reads more like a love letter to their radical base than a serious attempt at COVID relief. Senate Leader Mitch McConnell called it a "seasonal catalog of left-wing oddities." The Democrats call it the HEROES Act, but honestly, the most heroic thing anyone could do is kill it.

The summary alone is 90 pages -- and conservatives will need an empty stomach to get that far! "If you actually read through these 1,800 pages in this bill, you'll want to beat your head against the wall," Rep. Jim Banks (R-Ind.) said on "Washington Watch." "You quickly realize this has nothing to do with the coronavirus.
This is a wish-list grab bag, open door for Democrats to placate their left-wing base. They know that this bill is dead on arrival in the Senate. There's no way President Trump will sign it, but they're putting it on the floor anyway... because they want something to go back to their liberal base and tell them that they did something, and Republicans voted against it."
But here's the scary part, Jim pointed out. "If Democrats won the Senate and Joe Biden was president, this is exactly the type of bill that they would ram through if they had that kind of control."
Voters don't have to wonder what kind of extreme policies liberals would push with the keys to the White House and Senate. This is it, right there in black and white -- a complete upheaval of everything this administration has worked for on life, liberty, family, solvency, constitutionality.

And it's not just the policies that ought to concern Americans, it's the price tag. This is a $3 trillion-dollar proposal -- a surprising chunk of which goes to states that haven't proven they can manage with the money they have! Speaker Nancy Pelosi (D-Calif.) did exactly what Republicans asked her not to, Jim shook his head. She made this about bailing out blue states "with a track record of mismanagement and deficit spending."
Using Indiana's neighbor, Illinois, as an example, Rep. Banks pointed out the unfairness of the idea. Hoosiers, who've slashed spending and paid down their debt, would be forced -- under this bill -- to bailout states like Illinois who've let their budgets go to pot.
"It's absolutely shameful," he argued. She wants to balance the budgets of the radical governors on the backs of taxpayers. If liberal states want to run their economies into the ground with bad decision-making, fine. But it should be up to them to pay for it.
Otherwise, the government is just rewarding bad behavior. And Republicans said as much in a joint letter. "A bailout of these jurisdictions would only serve to condone these actions and encourage economically oppressive restrictions on American people and businesses." They're right. If these tyrannical governors know that Uncle Sam will come to their rescue, then they'll continue to exercise this dictatorial power for as long as they want.

Of course, the other major problem with this approach is that it undermines the will of other states. Take the Illinois-Indiana example Jim used. Indiana is a conservative state that defunded Planned Parenthood back when Mike Pence was governor. Their radical neighbor next door, however, not only funds Planned Parenthood but other controversial things like transgender surgeries.
Both states have a right to pursue those policies -- it's their money. But what they shouldn't have a right to do is impose those policies on others. Under these bailouts, taxpayers wouldn't have a choice. All money is fungible -- so there would be no way to protect Americans from subsidizing agendas they rejected in their own states.
And Pelosi doesn't stop there. She also took the opportunity to shoehorn her party's cheat-by-mail system into the text, gutting voter ID laws, signature witnesses, and other safeguards passed democratically by the states. "Also included in the plan," Breitbart warns, "is the legalization of ballot harvesting, allowing political operatives to collect and deliver as many ballots as they want" -- opening the door to widespread fraud, voter harassment, coercion, and impersonation.
"This is all about Democrats reworking American society in their own image to tilt the elections in their favor."
Originally published at Family Research Council - reposted with permission.