Will Some Churches Be Forced To Close For The Entire Duration Of COVID-19? 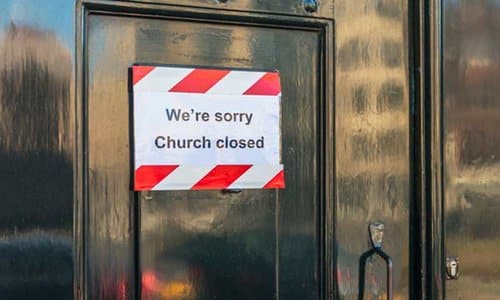 By Michael Snyder/End of the American Dream May 21, 2020
Share this article:
Isn't it odd that Walmart stores all over the nation have remained open throughout this crisis but we are being told that it is "too risky" to hold a church service in many states?
During this crisis it has often been said that "my rights do not end where your fears begin", but right now we are witnessing a stunning erosion of our First Amendment rights.
Churches remain closed in many states, and some churches in states that have "reopened" are now being forced to close down again.  For example, a Baptist church in Georgia has announced that they will not be holding any in-person worship services "for the foreseeable future"...
A representative for the Catoosa Baptist Tabernacle in Ringgold, Ga., told The Christian Post in a statement on Monday that church decided earlier this month to no longer offer "in-person worship services for the foreseeable future" after confirming some of its families were "dealing with the effects of the COVID-19 virus."

When that church started holding services again recently, extremely strict social distancing guidelines were put into place...
"Seating was marked to only permit sitting within the six-foot guidelines, all doors were open to allow access without the touching of doors, and attendees were asked to enter in a social distancing manner and were dismissed in a formal manner as well to ensure that the social distancing measures were adhered by all," the church told the outlet.
But even with all of those restrictions, COVID-19 started spreading in the church.
And so now that church has closed up shop indefinitely.
In Houston, another church that recently reopened has now been forced to close again...
Days after the move by the church in Georgia, ABC News reported that Houston-based Holy Ghost Parish also did the same after it was discovered multiple members of the organization had contracted the novel coronavirus and one leader had died.
The Archdiocese of Galveston-Houston said the church, which had also reportedly begun hosting mass at the start of May as some coronavirus restrictions on certain businesses in Texas had begun to ease, decided to re-close last week after the death of Father Donnell Kirchner, 79.
Sadly, we will probably see a lot more stories like this in the weeks and months to come.
But no matter what we do, we aren't going to be able to prevent people from catching the virus.  In order to do that, we would literally have to shut down everything for a very long time, and that is simply not going to happen.
Whether the current "shelter-in-place" restrictions remain in place or not, and whether we are holding church services or not, the truth is that this virus is going to continue to spread.
And it will keep spreading until the vast majority of the U.S. population has been exposed to the virus and herd immunity has been achieved.

So shutting down all of our churches is not going to solve anything, but the mainstream media keeps pumping out horror stories about how Christian gatherings are helping to spread COVID-19.  For example, the following comes from CNN...
A person who later learned they were positive for Covid-19 attended a California religious service on Mother's Day, exposing 180 other people to the novel coronavirus, according to local health officials.
The individual got a positive diagnosis for Covid-19 the day after the service and is now in isolation at home, Butte County Public Health said in a statement Friday.
And here is a story from NBC News about a church in Arkansas...
Two people infected with COVID-19 spread the virus to more than 30 people during church gatherings in Arkansas in early March, before the first case was ever diagnosed in that state, according to a report from the Centers for Disease Control and Prevention published Tuesday.
The cases illustrate how rapidly the virus can spread to others involved in faith-based organizations, and may have implications for places of worship as churches nationwide figure out how to reopen safely.
But why don't we ever see any stories about how our major retail stores have become hotbeds for spreading the virus?
Without a doubt, it would be much easier to catch COVID-19 in a large retail store than it would be in a church.  Thousands upon thousands of people are constantly streaming through our big stores, and many of them have got to be absolutely teeming with the virus.
It just greatly disturbs me to see such a double standard going on.
If it is safe enough for people to go to Costco, then it is safe enough for them to go to church.

And the truth is that a lot of our churches are going to end up collapsing if they are not permitted to reopen soon.  According to the Washington Post, approximately one-third of all U.S. churches "have no savings"...
The novel coronavirus is pressing painfully on the soft underbelly of U.S. houses of worship: their finances. About a third of all congregations have no savings, according to the 2018-2019 National Congregations Study.
Just 20 percent streamed their services and 48 percent were able to accept donations electronically, the study found, making it more challenging to serve the faithful and gather their donations during the virus shutdown.
Already, some churches have been forced to lay off staff and radically cut expenses.
If they are not allowed to resume normal activity for the foreseeable future, many of them will not end up surviving at all.
Even before this pandemic, it was estimated that somewhere between 6,000 and 10,000 churches were dying each year in the United States.
Needless to say, the number for this year will be off the charts.
Of course some churches will insist on waiting to reopen until the threat of COVID-19 has completely passed, but that might be a really, really long time.
In fact, a draft Pentagon memo that was just made public is warning that this virus will remain a threat until "at least the summer of 2021"...
The Defense Department should prepare to operate in a "globally-persistent" novel coronavirus (COVID-19) environment without an effective vaccine until "at least the summer of 2021," according to a draft Pentagon memo obtained by Task & Purpose.
"We have a long path ahead, with the real possibility of a resurgence of COVID-19," reads the memo, authored for Secretary of Defense Mark Esper but not yet bearing his signature.
There are very, very few churches in America that could afford to be shut down for that long.
And what most people don't realize is that COVID-19 is not the worst thing we are going to face.  Much larger challenges are on the horizon, and they will shake our society to the core.
At a time like this, people need hope, and that is why it is so important for our churches to be up and running.
Unfortunately, many of them now have a closed sign, and that is likely to remain the case for the foreseeable future.
Originally published at End Of The American Dream - reposted with permission.