Surprise! - UN/WHO Covid-19 Funding For Palestinians Ends Up With Terrorists 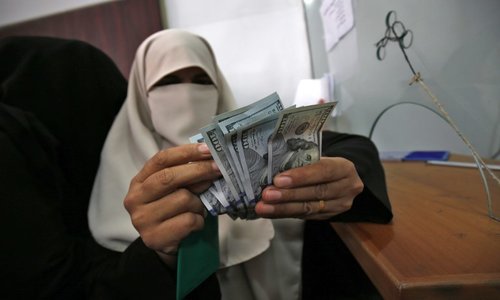 By Adam Eliyahu Berkowitz/Breaking Israel News June 01, 2020
Share this article:
A report by NGO Monitor revealed that emergency COVID-19 funding provided by the United Nations Office for the Coordination of Humanitarian Affairs (OCHA), the UN body that responds to natural disasters, and the UN's World Health Organization (WHO) went to organizations that have ties to the People's Front for the Liberation of Palestine (PFLP), a group that is classified as a terrorist organization in Israel, the EU, US, and Canada.
The WHO and OCHA have requested to date a total of $42 million to "respond to the public health needs and immediate humanitarian consequences of the pandemic in the West Bank, including East Jerusalem, and the Gaza Strip"
NGO Monitor challenged the claim that this was in fact what the funds were being used for.
"In some instances, it is clear that existing NGO advocacy ventures, which often involve anti-Israel rhetoric and agendas, have been relabeled 'COVID-19,' without a substantive contribution to emergency humanitarian aid," NO Monitor reported.
"Furthermore, some of the descriptions of NGO activity indicate low- or no-cost efforts, and/or tasks that had already been performed - although there is no information about how much money the NGOs were receiving."
"This suggests that key factors for OCHA are the goals of procuring funds for their NGO allies and "padding the stats" - not providing critical humanitarian materials in the most efficient and professional manner possible."
Among OCHA's NGO partners which all have ties to the PFLP are the Health Work Committees (HWC), Union of Health Work Committees (UHWC), Union of Agricultural Work Committees (UAWC), Union of Palestinian Women's Committees (UPWC), and Palestinian Center for Human Rights (PCHR). OCHA and the WHO also partnered with anti-Israel advocacy groups such as Yesh Din, Al Mezan, Adalah, and HaMoked.
Two examples of the terrorist links was the HWC's Financial and Administration Director Waleed Hanatshehwhich and Samer Arbid, UAWC's financial director, who are currently standing trial for funding the August 2019 bombing that killed Rina Schnerb.

Some of the countries that contributed to the COVID-19 emergency response plan were Canada, the EU, France, Germany, Ireland, Kuwait, Norway, Sweden, Spain and the UK, in addition to international organizations.
NGO Monitor President Prof. Gerald Steinberg said: "Our report provides a snapshot of what humanitarian aid actually looks like in crisis situations, and the accompanying shortcoming. It appears that key factors for OCHA are the goals of procuring of funds for NGO allies and 'padding the stats,' not providing critical humanitarian aid."
The connection between international funding and Palestinian terrorism is not limited to the WHO and OCHA.
During a May 19, 2020 meeting of the European Parliament Committee on Foreign Affairs (AFET), Commissioner for Neighborhood and Enlargement Olivér Várhelyi stated that he had instructed the heads of EU delegations to Israel and West Bank/ Gaza to "look deep" into the allegations that some EU funds go to terror-linked or -supporting NGOs, declaring that such funding "will not be tolerated.
Originally published at Breaking Israel News - reposted with permission.