The Conservative Effort To Reshape The Supreme Court Has Failed 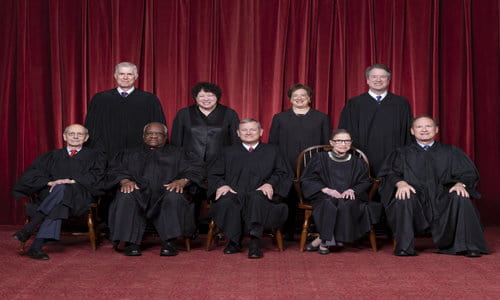 By Michael Snyder/End of the American Dream June 24, 2020
Share this article:
It is time to admit the truth.  Throughout my entire lifetime, Republican presidential candidates have promised us that if we help get them elected they will move the Supreme Court in a more conservative direction.  But it hasn't happened.
A Republican has been in the White House for 31 of the last 51 years, and yet the left has enjoyed a virtually uninterrupted string of historic Supreme Court victories throughout that entire stretch.  And even though a majority of the justices on the Supreme Court right now have been appointed by Republicans, the left continues to win one major victory after another.
The reason why this has happened is because Republicans have failed over and over again to nominate true conservatives to the Supreme Court.
At this point, only Clarence Thomas and Samuel Alito can really be considered "conservatives", and that means that liberal causes will continue to march forward at the Supreme Court for the foreseeable future.

Have you noticed that the liberal justices always vote the way that the left wants them to vote on key issues?
That is because the left doesn't make mistakes when it comes to the Supreme Court.  Historically, they have always selected their nominees very, very carefully, and so they always knew exactly what they were getting.
On the other hand, conservatives have been conned into supporting Supreme Court nominees that were either "moderate" or openly liberal for decades.
It all started with Richard Nixon.  He nominated four justices to the Supreme Court, but instead of a more conservative court we ended up with Roe v. Wade.
Reagan and Bush combined to appoint five new justices to the Supreme Court, but Sandra Day O'Connor, Anthony Kennedy and David Souter all turned out to be quite liberal.
George W. Bush gave us John Roberts, and conservatives all over the country cheered when he was confirmed.
But he has also turned out to be very liberal.  He has repeatedly voted with the liberal wing of the Court, and on Thursday he once again voted with them in the DACA case.
President Trump was quite upset that the Supreme Court overturned his decision to repeal DACA, and he immediately sent out a tweet calling for people to vote for him in November so that he can appoint "new justices"...
President Trump, in the wake of Thursday's defeat at the Supreme Court in his efforts to repeal the Obama-era Deferred Action for Childhood Arrivals (DACA) program, called for new justices as conservatives took aim at Chief Justice John Roberts for what they called a "pattern" of siding with the liberal wing in key decisions.

"The recent Supreme Court decisions, not only on DACA, Sanctuary Cities, Census, and others, tell you only one thing, we need NEW JUSTICES of the Supreme Court. If the Radical Left Democrats assume power, your Second Amendment, Right to Life, Secure Borders, and ... Religious Liberty, among many other things, are OVER and GONE!" he tweeted.
If Trump had nominated rock solid conservatives so far, he would have a valid point.
But he did not do that.
Neil Gorsuch and Brett Kavanaugh have both turned out to be major disasters.  Earlier this week, Gorsuch actually wrote the opinion for the Supreme Court decision that ruled that the Civil Rights Act of 1964 applies to LGBTQ employees.  And even though Kavanaugh dissented for technical reasons, he still had very high praise for the decision...
"Millions of gay and lesbian Americans have worked hard for many decades to achieve equal treatment in fact and law. ... They have advanced powerful policy arguments and can take pride in today's result."
There were millions upon millions of conservative Americans that strongly supported Gorsuch and Kavanaugh as nominees, and now they realize that they got conned.
Of course this never would have happened if they had been vetted properly in the first place.
With Gorsuch, there was much to be concerned about...
Neil Gorsuch's treacherous deception was predictable, given the fact that Judge Gorsuch attended the ultra-liberal St. John's Episcopal Church in Boulder, Colorado. His pastor, Rev. Susan Woodward Springer, is pro-LGBT, pro same-sex marriage and anti-Trump.
Following the election of Donald J. Trump, she wrote that "her congregation should strive to behave as godly people who spread hope even though 'the world is clasping its head in its hands and crying out in fear.'" That Sunday, following Trump's victory, Neil Gorsuch was an usher in the morning service.

And I was strongly warning about Kavanaugh when he was nominated, but voices such as mine were completely drowned out by the flood of conservatives that were vigorously backing him.  They saw how much the left hated Kavanaugh, and so they assumed that he must be good.
But now we know the truth.
In any event, any future efforts to reshape the Supreme Court may come to a crashing halt if Joe Biden wins in November.  A new Fox News poll has Biden up by 12 points, and Biden is doing particular well with certain demographic groups...
Biden has a 79-point advantage among black voters, a 37-point advantage among young people, a 22-point lead in the suburbs, and a 19-point lead among women. He also leads among voters over the age of 65 by 10 points.
Trump, meanwhile, leads by 41 points among evangelicals, although he carried Christians by 64 points in 2016. He leads by 9 points among rural voters, a demographic he won by 27 points in the last election.
At this point, it would take an enormous political miracle for Trump to win.
Of course we did see such a miracle in 2016, and in this political environment anything is still possible.
But even if Trump wins, would conservatives really be happy with more Supreme Court nominees like Gorsuch and Kavanaugh?
Ever since Richard Nixon first entered the White House, there has been opportunity after opportunity to move the Supreme Court in a more conservative direction, and the ball has been dropped time after time.
Collectively, it has been a colossal failure of epic proportions, and it is one of the big reasons why our nation is such a giant mess today.
Originally published at End Of The American Dream - reposted with permission.