Does New DVD Identify the USA in Ezekiel 38? 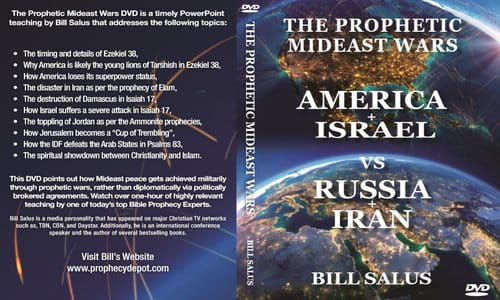 By Bill Salus July 01, 2020
Share this article: This newly released DVD entitled, THE PROPHETIC MIDEAST WARS will equip you for the world changing events that are coming!

Some of the important topics addressed in this timely PowerPoint presentation by Bible prophecy expert Bill Salus include:

- The biblical, historical, archaeological, geo-political and prophetic connections between America and the young lions of Tarshish in Ezekiel 38:13

- The timing and details, including the identities of the 15 participants, of Ezekiel. 38

- How America loses its superpower status

- The sequence of prophetic events that lead up to the fulfillment of Ezekiel 38 such as:

- The prophecy of Elam in Jeremiah 49:34-39, which deals with a possible nuclear attack in western Iran

- The destruction of Damascus by the Israeli Defense Forces in Isaiah 17 and Jer. 49:23-27

- The Arab attack that severely shakes Israel in Isaiah 17:4-6

- The desolation of Amman, Jordan by the IDF as per Jeremiah 49:1-6 and the toppling and takeover of Jordan in Zephaniah 2:8-9

- How Jerusalem becomes a "Cup of Trembling"

- How the IDF becomes the fiery torch that devours the surrounding Arab states in Zechariah 12:6

- The Psalm 83 prophecy that ends the Arab-Israeli conflict

- The comparisons between Psalm 83 and Ezekiel 38

- The spiritual showdown between Christianity and Islam that is taking place inside of Iran presently. This closing section includes two powerful videos that illustrate how the Lord is creating Iranian conversions to Christianity through supernatural evangelism, such as, miracles, dreams, visions and healings.

This DVD points out how Mideast peace gets achieved militarily through prophetic wars, rather than diplomatically via politically brokered agreements.

In light of the potential Israeli annexation of portions of the West Bank as per the "Peace to Prosperity" part within President Trump's "Deal of the Century" plan, this teaching DVD is extremely timely.

Order your copy for only $15.95 plus shipping & handling by clicking here