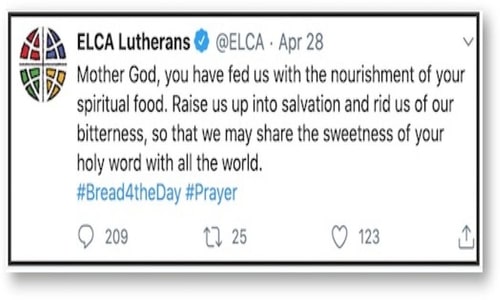 By Pastor Tom Brock/Pastors Study July 06, 2020
Share this article:
I spent many years as a pastor in the Evangelical Lutheran Church in America until I led my congregation out for a more Biblical branch of Lutheranism.  "Liberal" is no longer the word for the ELCA, it has become radical.  Here is what I mean:
The ELCA pays for abortion for any reason in the denomination's healthcare plan which is funded by offering dollars.  That's right, "your offering dollars at work" can go to kill unborn children.
The ELCA ordains practicing homosexuals and now also transgender pastors.

Two summers ago, 31,000 ELCA teenagers attended the ELCA's youth gathering.  Popular ELCA pastor Nadia Bolz-Webber led the students to say after her "I renounce the lie that queerness is anything other than beauty".
At the youth gathering an 11-year-old boy who thinks he is a girl was put on stage to promote transgenderism.
This past summer the ELCA in convention passed an interfaith resolution stating that we do not know what God thinks of non-Christian religions.  A delegate got to the microphone to offer an amendment, saying that we do know because John 14:6 says that Jesus is the only way of salvation.  His amendment was voted down by 97 percent.
A Chicago newspaper asked ELCA head bishop Elizabeth Eaton if Hell exists. Her response: "It may, but I think it is empty."

Recently the Christian Post reported on the ELCA promoting a prayer to "Mother God."   If you go to herchurch.org,, you will find an ELCA congregation in California which worships "Our Mother who is within us..."
The church's pastor led the women on a retreat in which she gave each a lump of clay to fashion their own Asheroth goddess statue so they could worship the "forbidden divine feminine."
My alma mater, the ELCA's Luther Seminary in St. Paul, Minnesota, held a commemoration service for the Transgender Day of Remembrance in which the transgender preacher led the students in the Lord's Prayer, saying "Our Mother in heaven."
I am on a Facebook page that includes pastors of the Evangelical Lutheran Church in America, some of whom believe it is sexist to pray exclusively to God as Father.  I responded that Jesus taught us to pray "Our Father" and we are in no position to correct Him.
A music minister at an ELCA church in Virginia didn't like my comment and responded: "The Lord's Prayer is a pattern for prayer. Do you still say it in Arabic? Hebrew? Then shut up. I'll call God Father, Mother, Sister, Brother, anything I want. Doesn't change my salvation."
Notice what is going on in this comment. Lutherans believe we are saved by grace alone and not by our good works--which is gloriously true (Ephesians 2:8-9). But some Lutherans practice "grace abuse" and say "Because I'm saved by grace, I can live like the devil and do whatever I want".

Or, as the Apostle Paul put it: "Shall we continue in sin that grace might increase? May it never be!" (Romans 6:1). Yes, we are saved by grace alone, but grace never is alone, it always changes our lives. Good works do not save us, but they are the evidence that we have been saved by Christ.
So, no, we are not free to worship God as "Mother, Sister, Brother, anything I want". The grace of Christ moves us to want to obey God, not to treat Him with contempt and remold Him into "anything I want."
Sadly, the ELCA has become the denomination of "anything I want."   Martin Luther believed that "the Bible alone" is the highest authority for the Church and he would grieve if he could see what the ELCA has become.   In fact, some of us think ELCA really stands for "Everything Luther Cautioned Against."
Originally published at Pastors Study - reposted with permission.