Turkey Looks To Rebuild The Ottoman Empire With Eyes On Jerusalem 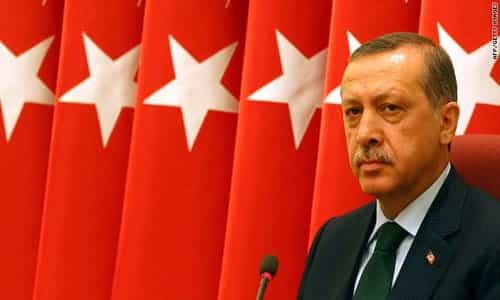 By Jonathan Tobin/JNS.org July 23, 2020
Share this article:
To understand just how dishonest the discussion about Jerusalem is when conducted in venues where Israel is regarded with hostility, like The New York Times, you need to start by discussing events in Istanbul, Turkey.
Last week, the regime of Turkish authoritarian President Recep Tayyip Erdogan moved to turn the clock back to 1453, when the Muslim Ottomans besieged the city then known as Constantinople. It was all that was left of the once-mighty Byzantine Empire, which ruled much of the region as the successor to ancient Rome in the eastern Mediterranean. When the city fell after a 53-day siege, the attacking forces engaged in an orgy of murder, rape, and destruction.
But in the aftermath of the battle, the Ottoman Turks not only made the city the capital over which their empire would rule until the end of World War I; they also converted the city's largest church -- the Hagia Sophia, which was the center of Eastern Orthodox Christian worship -- into a mosque.

The action was typical of conquerors in that era, as well as in ancient times, and the symbolism of triumphant imperialistic Islam was obvious. But in the 20th century, when Turkey became a secular republic after the fall of the Ottomans, the Hagia Sophia was turned into a museum as part of secularist-leaning Kemal Atatürk's efforts to put Islamic extremism in the past.
A century later, Erdogan is determined to consign such enlightened attitudes to the dustbin of history. The Turkish leader's ambition to be the leader of the Islamic world is also motivating him to engage in the sort of gestures that will prop up notions about maintaining Islam's domination of the region.
In a statement, Erdogan said that the reimposition of Muslim worship at the Hagia Sophia is "the harbinger of the liberation of Masjid al-Aqsa [the Al-Aqsa Mosque on Jerusalem's Temple Mount]." That's a call for throwing Israel out of Jerusalem and the spot holiest in Judaism. That this incendiary comment came during the period when religious Jews begin the period of mourning for the destruction of the ancient Temple culminating on Tisha B'Av is probably coincidental but still chilling.
What happened in Constantinople was hardly unique. Invading Muslims did the same thing everywhere that they triumphed during the period when they spread their faith by force of arms from India to Europe. And, to be fair, Christian forces repaid the favor when they reconquered Spain and the Balkans by converting mosques into churches.
So when Erdogan echoes the Palestinian rhetoric of both the so-called moderates of Fatah and the extremists of Hamas about chasing the Jews from Jerusalem, he's not just signaling his hostility to the Jewish state. He's also making it clear that he wishes to claim the title of the guardian of Islam from Saudi leaders that many Muslims think are now tainted by their under-the-table relations with Israel.
Unfortunately, the Hagia Sophia precedent is also helping shape the discussion about Jerusalem.
An example of this came in The New York Times in a column written by Mustafa Akyol, a regular contributor to the paper's opinion section. Akyol, a senior fellow at the libertarian Cato Institute, is a Turkish Muslim scholar who is dedicated to a more liberal version of Islam.

Writing ostensibly to criticize Erdogan, Akyol argues that the Muslim takeover of the Hagia Sophia actually runs counter to the precepts of the Prophet Muhammad, which was, he said, later discarded by Muslims after their conflicts with the Christian world intensified. His purpose is to ask Muslims to revive a more tolerant version of their faith, and it is to be hoped that sentiment will be heeded.
But the proof he puts forward for his thesis is to claim that when Muslims took Jerusalem from the Byzantines, they refrained from converting other the shrines of other faiths into mosques.
As he writes: "The Christian historian Eutychius even tells us that when Caliph Umar entered the city, the patriarch of Jerusalem, Sophronius, invited him to pray at the holiest of all Christian shrines: the Church of the Holy Sepulcher. Umar politely declined, saying that Muslims might later take this as a reason to convert the church into a mosque.
He instead prayed at an empty area that Christians ignored but Jews honored, then as now, as their holiest site, the Temple Mount, where today the Western Wall, the last remnant of that ancient Jewish temple, rises to the top of the Mount, on which the Mosque of Umar and the Dome of the Rock were built. In other words, Islam entered Jerusalem without really converting it."
That sounds nice, but it is utterly disingenuous. By putting mosques on the Temple Mount, the caliph was signaling that Muslims were asserting their dominance over the people who had the strongest claim to the city and the holy places. Some 25 years before the Muslim conquest, Persian Sassanid conquerors had briefly thrown the Byzantines out of the region and turned Jerusalem over to the Jews, who built a synagogue on the Temple Mount.
That brief period of Jewish rebuilding was snuffed out by Christian violence and Persian betrayal. But the notion that nobody wanted the Temple Mount but the Muslims in that period of history is untrue. The Muslim conquerors could have placed their mosques anywhere. Putting them on the Temple Mount achieved the same goal as was pursued in Constantinople eight centuries later.
There is only one example of a victorious power rising above sectarian conflict when it comes to religious shrines, and contrary to Akyol, it has nothing to do with the first Muslim conquerors. Rather, it is what happened in June 1967 when Israeli forces reunited Jerusalem.

The city had been divided for 19 years, during which Jordan banned Jews from praying in the Old City of Jerusalem, and desecrated and destroyed synagogues and places like the ancient cemetery on the Mount of Olives.
Nevertheless, when Israeli paratroopers took possession of the Old City, they not only preserved the mosques on the Temple Mount, but Defense Minister Moshe Dayan handed over control of the area to the Muslim Waqf. This inaugurated the first period in Jerusalem's history when free access to all the holy sites for believers of all faiths was granted.
The one exception to that rule is the Temple Mount, where, to this day, Jews are prohibited from praying anywhere on the sacred plateau above the Western Wall. An Israeli government that is fearful of doing anything to validate conspiracy theories spread by Palestinian leaders about a plot to blow up the mosques has rigorously enforced this rule.
The point here is not only to bring attention to the revanchist Islamist spirit that Erdogan's boasts represent. Nor is it to highlight the fact that even Muslim liberals like Akyol are unable to be honest about the way Judaism's holiest site was converted into a Muslim shrine that is inviolable in the view of world opinion.
Rather, it is to point out that the only way Jewish access to holy sites in Jerusalem, as well as that of other faiths, will be preserved is by ensuring that the city is not redivided as advocates of a two-state solution with the Palestinians insist must happen.
The only alternative to the status quo in Jerusalem is not a platonic utopia of two peoples living happily together in shared sovereignty, as envisaged by anti-Zionists like Peter Beinart, or by returning to the peace parameters embraced by the Obama administration that would split the city.
Erdogan's revival of the brutal conqueror's path is the only other choice. Those who care about religious freedom and the preservation of the holy sites should draw the appropriate conclusions from events in Turkey, particularly the way it is discussed in the pages of the Times.
Originally published at JNS.org - reposted with permission.