Taking A Stand Against Marxist Ideology 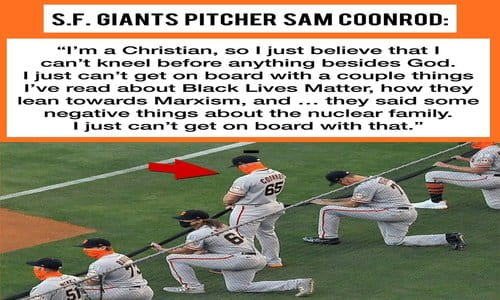 By Tony Perkins/Family Research Council July 28, 2020
Share this article:
If fans flipped on their TVs hoping for an escape from the madness of 2020, the return of major league baseball wasn't it. Americans who tuned in to Friday's season openers, desperate for a return to something normal, were forced to witness another protest: the players'.
In some ballparks, like the Washington Nationals, the politically-charged messaging was everywhere -- from the Black Lives Matter "unity" ribbons to the "BLM" stenciled on the back of the pitchers' mound. But when the entire league is kneeling, it only takes one player to stand out. And for the Giants' Sam Coonrod, there was never any question.

"I'm just a Christian," he said after the game. "I don't think I'm better than anybody," he tried to explain. "I chose not to kneel. I feel if I did kneel, I'd be a hypocrite. I don't want to be a hypocrite." Unlike a lot of Americans, Sam knows that there's a lot more to the Black Lives Matter organization than the slogan.
"I just can't get on board with a couple things I've read about Black Lives Matter. How they lean towards Marxism and ... they said some negative things about the nuclear family." At the end of the day, Sam explained, he doesn't mean any "ill will." But it's time, he would argue, for our country to realize what's really behind the hashtag.
Ordinary people in this nation, well-meaning Christians even, want to believe that Black Lives Matter is just a crusade for racial justice. That it's a peaceful group, if not a passionate one, fighting for civil rights. They buy into the sentiment, not realizing that what they're really adopting in those three words is a violent revolution with one goal: annihilating America. This isn't the stuff of posters and wristbands. These are extremists with a profoundly chilling vision. And they'll be the first ones to tell you so.
Co-founder Patrisse Cullors has been surprisingly open about the group's real agenda for years. "We are trained Marxists," she warned. "We are super-versed on ideological theories."

During a candid interview in 2015, Cullors explained that BLM has "really clear direction as to where we want to take this movement. I don't believe it's going to fizzle out," she said, somewhat prophetically. "It just gets stronger..." And violence is just one way they intend to be heard.
"If this country doesn't give us what we want," Greater New York Black Lives Matter President Hawk Newsome warned, "then we will burn down this system and replace it." But it might surprise the majority of Americans to know that "what they want" isn't an end to police brutality or racism. It's an end to freedom, speech, religion, and true equality.
"All you shopkeepers putting signs in your stores, you schoolteachers programming your students to lock arms, you men and women of the cloth preaching about unity, you civic leaders urging community action... [beware]," Brent Bozell writes.
To the Christian leaders, anxious to show their sympathy, "While you're sermonizing about the need to show support for their movement, BLM leaders are sermonizing about destroying yours."
How many Christians plaster "Black Lives Matter" across their social media pages not realizing that they're supporting a group that wants to abolish the nuclear family? Or that the movement they're identifying with justifies cop killings, prostitution, anti-Semitism, anarchy, and the suppression of speech and religion?
Too many people have been taken in by this whitewashed version of the BLM movement in the aftermath of George Floyd's death, not realizing the dangerous agenda lurking beneath. That's a mistake, FRC's Ken Blackwell argued on "Washington Watch."
"This is about the Left advancing a strategy to fundamentally change our country. And to effect this change, they first want to destroy it. They want to make sure that there is no positive interpretation of our historical narrative that includes anything that makes us uniquely American."

There are a lot of good people in this country who think by embracing this cause and repeating its mantra that they're somehow ascribing value to the lives of African Americans. Far from it. "Black lives don't matter to Black Lives Matter," Ken insists. "It cares about promoting a toxic ideology."
And the church -- and more broadly, the nation -- need to wake up to that reality. This is a crusade so menacing, Dan McLaughlin points out, that even Democratic leaders "warned their own party privately in 2015 against associating with the group."
Of course, Americans are terrified that if they don't embrace Black Lives Matter, they'll be labeled as bigots and racists. The extremists are counting on that fear to give them cover as they march, unchallenged, through our cities.
But if Christians and other citizens care about this great nation, they need to take a page out of Sam Coonrod's book and find their voice. Because if we actually follow this revolution to its conclusion, Mike Gonzalez and Andrew Olivastro warn, black lives -- and all lives -- would be harmed. "Theirs is a blueprint for misery, not justice. It must be rejected."
Originally published at Family Research Council - reposted with permission.