Turkey's Pan-Islamist Vision: From The Hagia Sophia To Jerusalem 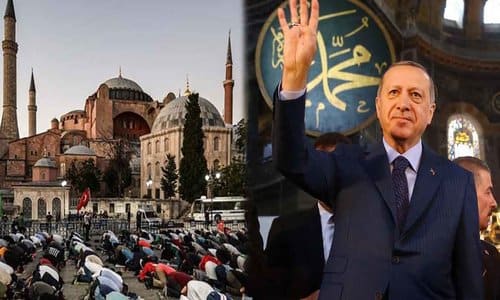 By Tony Perkins/Family Research Council July 30, 2020
Share this article:
On July 10, a Turkish court announced its decision to permit President Recep Tayyip Erdogan's regime to convert the ancient Christian church Hagia Sophia -- the Church of the Holy Wisdom -- into a mosque.
An outcry from around the world greeted the news. But within an hour, Erdogan signed an official declaration, stating that the conversion of Hagia Sophia to a Muslim place of worship is a fait accompli.
The revered Christian historical site has served as a museum since the overthrow of the Ottoman Empire following WWI, and the subsequent secular Turkish presidency of Kemal Ataturk.
The magnificent building -- an architectural marvel -- contains some of the most beautiful Christian frescos and mosaics in the world. Hagia Sophia remains the most popular tourist site in Turkey and is regularly visited by millions of Christian pilgrims.

The existing church, located in the heart of Istanbul, is a truly sacred space for Christians worldwide. It stands intact as one the most ancient artifacts of early Christian history:
The first church was built at the same location where there had been a pagan temple before. It was Constantius II who inaugurated Hagia Sophia on 15 February 360. From the chronicles of Socrates of Constantinople, we know that the church was built by the orders of Constantine the Great.
That earliest church was torched during rioting; a second Hagia Sophia was inaugurated in 532. Again, violence led to the church's damage and destruction.
Today's Hagia Sophia was completed and inaugurated in by Emperor Justinian the Great in 537; the magnificent mosaics -- some of the finest in the world -- were completed later in the sixth century. It is for both historic and sacred reasons that voices are protesting the Islamization of the holy site.
On July 10, the United States Commission on International Religious Freedom (USCIRF) decried the declaration that the ancient church would be converted into a mosque. USCIRF Vice Chair Tony Perkins said:
USCIRF condemns the unequivocal politicization of the Hagia Sophia, an architectural wonder that has for so long stood as a cherished testament to a complex history and rich diversity. Both Christians and Muslims alike ascribe great cultural and spiritual importance to the Hagia Sophia, whose universal value to humankind was reaffirmed with its inclusion in the United Nations Educational, Scientific, and Cultural Organization (UNESCO) World Heritage List in 1985.

Just weeks ago, on May 29, Erdogan, an aggressive pan-Islamist, celebrated the fifteenth century conquest of Constantinople with festivities centered on Hagia Sophia. It was converted into a mosque when the Byzantine (Christian) army was defeated by the armies of Sultan Mehmed II of the Ottoman Empire on May 29, 1453.
Turkey's Hurriyet Daily News reported:
...The program was followed with the recitation of the 48th chapter of the Quran, surah Al-Fath...Erdogan expressed gratitude to all those who did not abandon Hagia Sophia, the heirloom of the conquest. He stressed it was important to remember the 567th anniversary with prayers and surah Al-Fath. Erdogan said he had dedicated his life to his beloved Istanbul and noted that if the city was somehow removed from Earth, world history would have to be rewritten. A presentation with the theme of the conquest of Istanbul was performed on a platform in front of the museum.
For years, Hagia Sophia has been a coveted trophy for Erdogan, who publicly cherishes neo-Ottoman sentiments. However, there are other complaints besides that of USCIRF. And now, another significant force may push back again Erdogan's decision -- Russian President Vladimir Putin.
Putin proudly -- perhaps even pretentiously -- belongs to the Russian Orthodox church, and represents it globally. And Hagia Sophia has great significance to the Russian Orthodox world community. In fact, the most important Russian Orthodox voice in the world, Patriarch Kyrill, was quoted in The Moscow Times stating that he is "deeply concerned" by Turkey's moves, describing Hagia Sophia as "one of the greatest monuments of Christian culture..."
"A threat to Hagia Sophia is a threat to the whole of Christian civilization, and therefore to our spirituality and history," the Orthodox church leader said. "To this day, for every Russian Orthodox person, Hagia Sophia is a great Christian shrine," he said, urging the Turkish government to be cautious. He said that altering the current neutral status of the historic building would cause "deep pain" among the Russian people.

A Russian Orthodox publication reported on June 13, "Russian President Vladimir Putin recently had a telephone conversation with his Turkish counterpart, Recep Tayyip Erdogan, during which the issue of converting Hagia Sophia into a mosque by a decision of the Turkish president was discussed.
"In particular, and according to a statement issued by the Kremlin, Vladimir Putin drew the attention of Recep Tayyip Erdogan to 'the significant social impact caused in Russia regarding the decision to change the status of Hagia Sophia in Constantinople.'" Earlier Russian Deputy Minister of Foreign Affairs Sergei Vershinin had said, "You know that this issue has caused a public outcry in our country and beyond."
But to make matters worse, it seems that Erdogan isn't content with this latest Islamist move. The New Arab news site, along with the Jerusalem Post, reports that Turkey's president has also vowed to "liberate Al-Aqsa mosque" from Israel. He made this statement just moments after his controversial decision to transform the Hagia Sophia from a museum into a mosque was announced.
President Recep Tayyip Erdogan said (in Arabic), "The resurrection of Hagia Sophia is the footsteps of the will of Muslims across the world to come...the resurrection of Hagia Sophia is the reignition of the fire of hope of Muslims and all oppressed, wrong, downtrodden and exploited." An Arabic translation of the statement suggests Turkey's Hagia Sophia move is part of the "return of freedom to Al-Aqsa" from Israel.
The decision to Islamize Hagia Sophia, and Erdogan's subsequent declared "return to freedom" of Al Aqsa Mosque -- which stands in the heart of Jerusalem on the biblical Temple Mount -- expose even more starkly Erdogan's triumphalist pan-Islamist vision, as well as his loathing for Israel.
Will international reactions -- including Russian distress, Israeli dismay, and American disgust -- somehow lead to the rejection of Erdogan's fantasy of a neo-Ottoman Empire? Or will the world once again turn a blind eye to the Turkish strongman's insatiable ambitions? Time will tell.
Originally published at Family Research Council - reposted with permission.