Tensions Over Freedom Of Speech Expected To Increase This Year 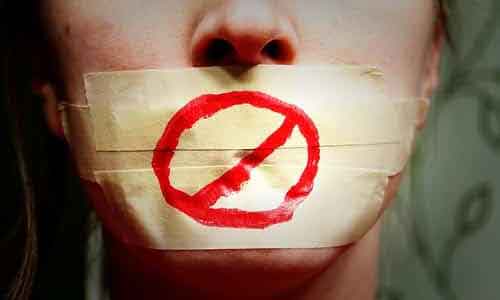 By Steve Schiller, Steel on Steel January 06, 2016
Share this article:
Freedom of speech is constantly under attack, not just in the United States, but in the West as a whole.  In fact, a majority of European countries are much further down the censorship trail than their "free" counterparts across the Pond.  Canada, though, is making every effort to catch up.
Where is the opposition to free speech coming from? It is, of course, a liberal social policy to limit free speech in the name of_____(fill in the blank). One institution is making inroads under the guise of tolerance  Islam; namely the Office of Islamic Cooperation (OIC).

For the past decade, the OIC has used pressure tactics to compel Western leaders to criminalize free speech because it may "incite religious hatred."
The former Soviet republic of Kazakhstan has set forth an example.  A 54-year old Kazakh father of 8, who recently converted from Islam to Christianity, was sentenced in late December to two years in a labor camp for inciting religious hatred.  What did he do?
He spoke to others about his new faith.  The dreaded term "proselytizing" was no doubt an issue at his trial.  Kazakh Christians, meanwhile, have gone underground and are now forced to meet in secret.
Closer to home, in Canada, the Quebec National Assembly is currently reviewing Bill 59 which would empower the Quebec Human Rights Commission (QHRC) to combat hate speech by censoring any communication that promotes "fear of the other."
Criticizing Islam in any way can be prosecuted. Notice how fear of the other is not specifically defined, giving the QHRC power to determine its meaning.
Here at home, Attorney Loretta Lynch used the San Bernardino tragedy to her advantage, vowing to take aggressive action against anti-Muslim rhetoric that "edges toward violence."
She stated, "Now obviously this is a country that is based on free speech, but when it edges towards violence, when we see the potential for someone lifting that mantle of anti-Muslim rhetoric...we will take action."
Thankfully, the outrage from Americans over this blatant gouging of the Constitution forced Lynch to backtrack from her comments, stating that she would only prosecute deeds not words.

The House of Representatives is getting in on the act, with 88 members sponsoring the OIC-inspired bill HR 569, which calls for condemning violence, bigotry, and hateful rhetoric toward Muslims in the U.S.
This bill, among other things, reminds us that the U.S. has a constitutional right to freedom of religion and that we are a nation accepting of all faiths and beliefs.
It implores leaders to denounce hate speech and violence against mosques and reaffirm every citizens right to practice their faith without intimidation.
I have to say I agree with all of that.  But the question I would ask to all Muslim leaders and organizations  not just here but throughout the world  is this: will you allow Christians and Jews to practice their faith without intimidation and denounce hate speech and violence against churches and synagogues?
The answer of course is no, as is evident in Israel and in many predominantly Muslim countries. But its also becoming prevalent on U.S. campuses.
At San Diego State University, the Muslim Student Association issued a list of demands late last year to school administrators, calling for a zero tolerance policy against Islamophobic speech and actions.
They insisted on promoting "tolerance and acceptance between different cultures and religions."
Several student organizations were asked to sign this document.  The only one left out was Students Supporting Israel.  Why?
The response from the MSA said, "it didnt serve the interests of the community."  So in trying to promote tolerance and inclusivity on campus, the Muslim Student Association  which has hosted anti-Israel BDS rallies  excluded a pro-Israel organization.
We could say they were being hypocritical and we'd be correct, but they are just taking the age-old political stance Muslim organizations always do: Israel is evil.
In all of these examples, demands were made for action against anti-Muslim rhetoric or censorship against speech promoting "fear of the other."  One thing all of these demands and proposed legislation's have in common is a lack of clarity.
Who gets to decide what anti-Islamic rhetoric is?  There have already been examples in the UK of Christians losing their jobs for the "hate speech" of sharing their faith with Muslim colleagues.
Leaving it open-ended is strategic on the part of the social policy crowd, because then they can use whatever bill becomes law to attack any speech they feel goes against the status quo.
It will start out with obvious examples, people cheering the use of the new law in taking down the Westboro Baptists of the world.  A few months or years down the line, however, the examples wont be as obvious.
By then, our Constitution will have been gutted and our freedoms will be a memory.