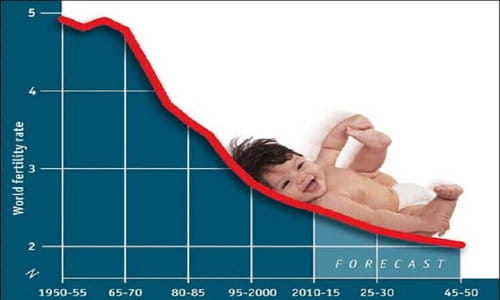 By John Stonestreet/Breakpoint.org August 03, 2020
Share this article:
A recent BBC headline claimed the world is facing a "jaw-dropping" global crash. Not an economic crash, mind you, but a crash in the birthrate. Citing a new study by University of Washington, the BBC article claims that "Falling fertility rates mean nearly every country could have shrinking populations by the end of the century."
In fact, 23 countries, including Spain, Portugal, Japan, and South Korea, could see their populations cut in half by 2100.
The same study found that, between 1950 and 2017, the global fertility rate went from 4.7 children per women to 2.4 and is expected to drop below 1.7 children per woman by 2100. For reference, a fertility rate of 2.1 children per woman is required to maintain a stable population.

A few suggested explanations for the drop, according to the BBC article, include "more women in education and work" and "greater access to contraception," which leads "to women choosing to have fewer children." Of course, the BBC was careful to offer the required nod to climate change, also suggesting that fewer people would result in lower carbon emissions and therefore help heal the planet.
In truth, however, the scenario is far from rosy.
"I think it's incredibly hard to think this through and recognize how big a thing this [population crash] is," says University of Washington Professor Christopher Murray. "It's extraordinary, we'll have to reorganize societies."
In his book, What to Expect When No One Is Expecting, Weekly Standard digital editor Jonathan Last suggests that any country in which citizens aren't having enough babies can look forward to long-term economic stagnation and social deterioration. After all, children are the economic engines of the future, both tomorrow's labor force and tomorrow's consumers.
Professor Murray described it this way to the BBC: "Who pays tax in a massively aged world? Who pays for healthcare for the elderly? Who looks after the elderly? Will people still be able to retire from work?"

And those are just the immediate concerns. As journalist Philip Longman explained years ago, declining populations and shrinking economies create a downwardly spiraling vicious circle: "As governments raise taxes on a dwindling working-age population to cover the growing burdens of supporting the elderly, young couples may conclude they are even less able to afford children..."
This, in turn, results in the kind of graying, despairing populations we see today in places like Japan and Europe, where some governments actually pay couples to get pregnant.
At the same time, the BBC notes, the population of sub-Saharan Africa will triple by the end of the century. Developed nations will be forced to open their borders and perhaps even compete for migrant workers. Given the human propensity for tribalism and racism, let's just say this will could create significant "social pressures."
Writing at the Gospel Coalition, Philip Jenkins describes yet another vicious circle that entwines a civilization dealing with an increase in secularization and a decline in fertility. Increased fertility is often associated with traditional religious beliefs, but as more believers accept secular ideas about sex, family, and the purpose of life, their connection to religious institutions weakens. Shrinking religious institutions, in turn, leads to increased secularization.
Babies have this unique ability to make adults care about the future, and even think beyond their own lifetimes. Babies incline people to save, invest, sacrifice and, most importantly, defer gratification. Even when it comes to the environment, the best reason to steward the planet is so our children and grandchildren can enjoy its fruits and grandeur.
Christians should always encourage those government policies that make it easier for couples to "choose life," but we also need to help people think more clearly about the whole issue. We have to debunk the over-population myth that should have died decades ago. The latest What Would You Say video tackles this question. Watch it, learn the key points, and share it with your friends and family: