Will The Shofar Sound From The Temple Mount This Rosh Hashanna? 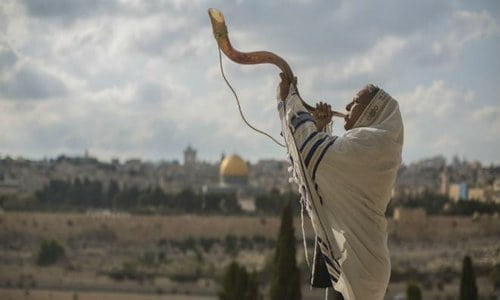 If they succeed, this will be the first time a shofar will be blown on the Temple Mount since the destruction of the Temple 1,950 years ago. In contravention of the law, the Israeli police forbid any non-Islamic symbols, non-Palestinian national symbols, or non-Muslim rituals on the Temple Mount. This policy is an attempt to lessen Arab violence.
Dignity and Liberty
Visoli emphasized that according to the Israeli Basic Law of Human Dignity and Liberty which mandates equality and freedom of all religions, this should be permitted.  He also noted that permitting Jews to perform this Biblical commandment on the Temple Mount is consistent with Trump's Peace Plan which states:
"People of every faith should be permitted to pray on the Temple Mount/Haram al-Sharif, in a manner that is fully respectful to their religion, taking into account the times of each religion's prayers and holidays, as well as other religious factors."
The formal request was also submitted to the Minister of Internal Security, and the Chief of Police. They were promised by Friday and if they do not receive an answer or their request is denied, the group intends to submit a petition to the Magistrate's Court.
Not a legal issue
"This is not a legal issue," Visoli said. "The law mandates that we are permitted to do this. Our request is that the police be instructed to permit this religious ritual to take place."
Rabbi Hillel Weiss emphasized that on Rosh Hashanna the world is judged and that aspect of the holiday is taking on dire meaning under the current conditions.

"Our demand now is to apply the one true sovereignty onto Zion," Rabi Weiss said. " call out to the King of kings with the eternal voice of the shofar, to spread His Kingdom to every creature. We are calling on the current Israeli government to take their role in manifesting the universal desire for redemption, which is the real mandate of the State of Israel.
It is our role to enable all of the nations to pray before HaShem (God, literally 'the name') with one voice, as we did at Mount Sinai, like we did after creation like we are destined to do again in the end-of-days when the dead will be resurrected, the day of universal and true freedom."
A shofar call to all the nations
"Blowing of the shofar on the Temple Mount of Rosh Hashanna is not a simple ritual as it is done in synagogues around the world. This is not just for the Jews who are there to hear it. This is a shofar call to all the nations of the world.
Now, more than ever before, we are crying out to Hashem to bless us with life, peace, and an end to plagues. Every leader in the world who cares and who sees himself as a representative of one of the 70 nations should call on Netanyahu to permit this to take place."

"As political processes concerning Israel and the Temple Mount move forward, so much is being said about the Arabs but not a word is said about the rights and requirements of the Jews in their Biblical homeland and our holiest site. And no one is speaking about the true 'owner'; of the land and His kingship. One of the names of the Temple was Bet HaTkiya, the house of the sounding of the shofar. Politics is nothing when compared to that."
The binding of Isaac
"Outside of the Temple, we blow a shofar made from a ram's horn. It is curved and reminiscent of the binding of Isaac. When the shofar was blown in the Temple on Shabbat Rosh Hashana, it was a goat's horn. It was a call to freedom, as hinted in Psalms."
The high mountains are for wild goats; the crags are a refuge for rock-badgers. Psalms 104:18
"Blowing the shofar that is specific to the Temple is a cry out to God to prevent the division of His land and the loss of His house. This shofar will topple anyone who is set on dividing God's land and opposing the establishment of a House of Prayer for All Nations in Jerusalem, just as the sound of the shofar toppled the walls that stood between the Jews and entering the Promised Land."
The plan
The petitioners plan on pursuing every possible legal avenue to bring about this momentous act. If the Israeli government fails to allow the blowing of the shofar to take place, and alternative ritual will take place adjacent to the Temple Mount.
As noted, since the holiday falls on Shabbat, Jewish law prohibits blowing shofar however the Sanhedrin has ruled that it is permitted, even necessary, to hold a ritual blowing of the shofar adjacent to the Temple Mount on the Sabbath of Rosh Hashana. This is hinted at in Psalms.
With trumpets and the blast of the horn raise a shout before Hashem, the King. Psalms 98:6
Originally published at Breaking Israel News - reposted with permission.

In what has been dubbed the "eat or heat" crisis, we can expect to see the situation deteriorate even further in the coming months, a deve...

September 27, 2022Will Europe Turn To New 'Club of Nations' To Help Get Through Next Crisis

The European Political Community is Emmanuel Macron's scheme to bring together EU nations and countries outside the bloc, potentially incl...

Could we actually see a Palestinian state be established within the next year or two? If this actually happens, it will have enormous imp...

Israel's Central Bureau of Statistics has published its final demographic figures for the Jewish year 5782....

September 24, 2022Economic Collapse Has Arrived In Germany. Will The U.S. Be Close Behind?

Germany was supposed to be the economic rock that the rest of Europe could always depend upon but now the Germans are dealing with the wor...

The military is struggling mightily to meet their recruitment goals as woke policies are being forced onto our service members by the Bide...

One of the best ways to fight cultural absurdity is to make fun of it. Scott Adams, creator of the comic strip "Dilbert," has spent 33 yea...