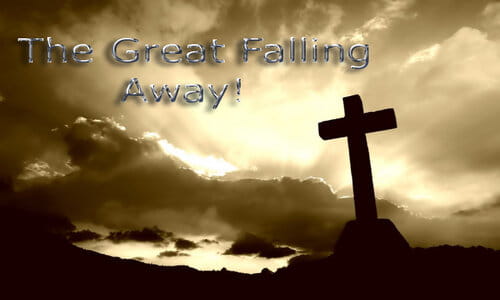 By Michael Snyder/End of the American Dream September 03, 2020
Share this article:
Every four years, there is a tremendous amount of discussion about "evangelical voters" and the influence that they will have on the outcome of the presidential election.
Most of the pundits on CNN, MSNBC and Fox News speak of evangelicals as if they were this monolithic group that all generally vote the same way and generally believe the same basic things.  Perhaps that was somewhat true at one time, but now things have dramatically changed.
As you will see below, surveys have found that large numbers of evangelicals are abandoning core evangelical beliefs at a rate that is staggering.  In fact, it has gotten to a point where I am not even sure what an "evangelical Christian" is anymore.
I figured that a good place to look for a definition of "evangelical Christian" in 2020 would be on the official website of the organization that is supposed to be representing us on a national level.

According to the National Association Of Evangelicals, there are certain distinct beliefs that set evangelical Christians apart from the rest of the population...
Evangelicals take the Bible seriously and believe in Jesus Christ as Savior and Lord. The term "evangelical" comes from the Greek word euangelion, meaning "the good news" or the "gospel." Thus, the evangelical faith focuses on the "good news" of salvation brought to sinners by Jesus Christ.
That definition seems quite soft to me, but let's run with it.
Evangelicals are supposed to believe that Jesus is Lord, but it appears that nearly a third of them do not really understand what that means.  According to one recent survey, a whopping 30 percent of all evangelicals believe that "Jesus isn't God"...
More than half of American adults, including 30% of evangelicals, say Jesus isn't God but most agree He was a great teacher, according to results from the 2020 State of Theology survey.
Even though the Bible and traditional teachings of the Christian Church hold that Jesus truly existed as both man and God, among the key findings of the biennial State of Theology survey from Ligonier Ministries conducted with LifeWay Research, is that 52% of American adults believe that Jesus was a great teacher and nothing more.
I don't understand how this could possibly be happening.
Either evangelical churches are doing an exceedingly poor job of teaching basic theology, or evangelicals are rejecting that teaching in staggering numbers.
Let's take a look at another issue.
According to a survey that was conducted last year, 61 percent of evangelical Christians want the Supreme Court to overturn Roe v. Wade...
In a 2019 survey, most Americans (70%) said they oppose overturning Roe v. Wade. But several states have enacted laws designed to challenge the ruling in recent years, including bills passed in seven states (among them Louisiana) that seek to ban almost all abortions.

White evangelical Protestants (61%) are much more likely to say they want the high court to completely overturn Roe v. Wade than are Catholics (28%), white Protestants who are not evangelical (26%) and religious "nones" (10%).
It is great that evangelicals are more likely than any other group to want Roe v. Wade overturned, but why isn't the number for evangelicals 100 percent?
According to the survey, 35 percent of evangelicals actually want the Supreme Court to keep Roe v. Wade in place.
But those two things should be mutually exclusive.  If you are an evangelical Christian, it should be impossible for you to support Roe v. Wade.
How in the world could more than a third of all evangelicals want to keep abortion legal?
And when it comes to gay marriage, we see numbers that are even more alarming.  The following comes from an article that was authored by Jim Denison...
Two reports caught my eye this week.
One: In 2007, 90 percent of evangelicals said their church forbid (63 percent) or strongly discouraged (27 percent) "homosexual behaviors." In 2020, that figure has dropped to 65 percent (33.7 percent forbid, while 31.4 percent strongly discourage).
Two: In 2008, 34.4 percent of evangelicals between the ages of eighteen and thirty-five supported same-sex marriage. In 2018, that figure had risen to 56.1 percent.
How are these numbers possible?
In the old days, it was well understood that "evangelical Christians" were against abortion and gay marriage.
But now a new generation of "evangelical Christians" has come along that is changing all of the old definitions.
Like I said, I am not sure that I can even define what an "evangelical Christian" is anymore.
At this point, a lot of "evangelical Christian" young people don't even like using words that directly relate to evangelism...
For example, 35% of young adults and 38% of teens said the word "convert" tops the list of objectionable mission-related words for them. And 31% of young adults and 30% of teens also rejected the term "winning souls."
If you don't believe in "converting" people or "winning souls", how in the world can you even call yourself an "evangelical"?
I simply don't understand.

Sadly, this is yet more evidence of the rapid decline of the Christian faith in much of the industrialized world.  According to researcher Ronald F. Inglehart, this decline has really picked up speed since 2007...
But since 2007, things have changed with surprising speed. From about 2007 to 2019, the overwhelming majority of the countries we studied--43 out of 49--became less religious. The decline in belief was not confined to high-income countries and appeared across most of the world.
Growing numbers of people no longer find religion a necessary source of support and meaning in their lives. Even the United States--long cited as proof that an economically advanced society can be strongly religious--has now joined other wealthy countries in moving away from religion.
And the decline in the United States has been particularly noticeable.  According to Inglehart, since 2007 the U.S. has moved away from religion faster than any other country...
From 1981 to 2007, the United States ranked as one of the world's more religious countries, with religiosity levels changing very little. Since then, the United States has shown the largest move away from religion of any country for which we have data. Near the end of the initial period studied, Americans' mean rating of the importance of God in their lives was 8.2 on a ten-point scale. In the most recent U.S. survey, from 2017, the figure had dropped to 4.6, an astonishingly sharp decline.
In a recent interview with Dr. Steve Greene, I discussed the fact that God has been trying to call this nation back to himself for a very long time, but we have been racing the other direction.
The numbers that I have just shared with you are evidence that we desperately need revival, and that is what we should be praying for.
Because the only hope for America is a return to God, and right now that is definitely not happening.
Originally published at End Of The American Dream - reposted with permission.