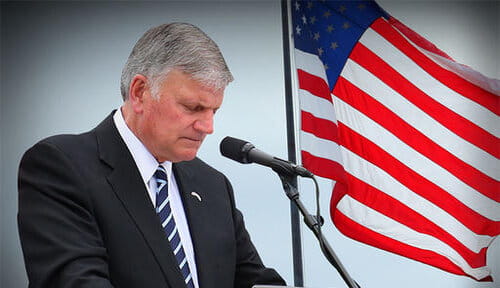 By Tony Perkins/Family Research Council September 07, 2020
Share this article:
It seems like a parallel universe now, but at the time it seemed perfectly normal. In 1988, Billy Graham gave a nonpartisan prayer at the Democratic National Convention, and it was received respectfully and without controversy. In those days, a respected pastor saying a prayer at a nationally televised political convention was seen as a matter of course, no matter what their personal political leanings might be.
But no longer. Last week, Billy's son Franklin said a nonpartisan prayer on the closing night of the RNC. This was apparently too much for George Soros-funded activists on the Left, who have launched a petition demanding that Graham be removed as chairman and CEO of the charitable organization Samaritan's Purse for making a "partisan appearance."

But as Graham explained on Washington Watch, his prayer made no mention of a particular party: "I did not come out in my prayer supporting the president or Joe Biden. I just asked that we pray and ask God's blessing on them and protection for all of our leaders." As Graham made clear, prayer goes beyond politics: "I would have prayed at the Democratic National Convention if they invited me. I think prayer is important, especially to pray for our leaders."
What's interesting about this latest salvo from the Left is how it reveals their hypocrisy on religion in the public square. The DNC was happy to feature prayer from clergy who, as Graham noted, are "very liberal in their theological views. They prayed at the DNC, but activists on the Left did not call for them to step down or to resign their positions because they prayed."
This is just the latest example of how the Left wants the symbolism of religion but not the substance of scripture. The Democrats will allow a token liberal pastor or two to say a prayer on national television, but at the same time they have quietly scrubbed any mention of God (except for one instance of "God-given" as a descriptor) from their official platform.

What's more, it is the Left that is trying to systematically remove God from the public square by persecuting the religious freedom of business owners and students in public schools, removing the Ten Commandments from court houses, mocking prayer during national tragedies, demanding the resignations of believers in the military, etc.
How should we respond? As Tony reiterated, "the alarm bells should be ringing and Christians should be responding. It begins with prayer, but it doesn't stop there. We need to vote. We need to vote biblical values and we need to stand up for biblical truth no matter what the culture may say."
Originally published at Family Research Council - reposted with permission.

A report by the University of Oxford suggests we will face a robot job apocalypse predicting that 47 percent of U.S. jobs are at risk of b...

October 16, 2020Will The US Go The Way Of Venezuela? Scary Parallels

People want to believe that once 2020 is over, life will return to "normal" and that we're just having a really bad year. When you look a...

October 16, 2020Are You Prepared For The Imminent US Digital Dollar?

Given the fact that the dollar has lost so much of its value, it's not unreasonable to recognize that it's near the end of its run now and...

October 16, 2020One In Five Americans Could Be Out Of Money By Election Day

Consumer finance company Credit Karma has released a new survey showing that nearly one-quarter of U.S. consumers say they have less than ...