Father Naddaf: Beacon of Light to the Christians of Israel 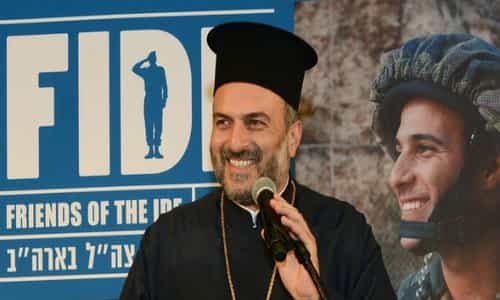 By Susan Warner/Gatestone Institute June 20, 2016
Share this article:
When Father Gabriel Naddaf, a Greek Orthodox priest in Nazareth, Israel, launched his campaign to convince Israeli Christians to enlist in the Israel Defense Force (IDF), he unwittingly ignited a firestorm between opposing forces within and around Israel's Christian and Muslim communities.

His decision, born of his love and respect for his native land -- combined with his acknowledgement of Judaism and Israel as the cradle of Christianity -- perhaps has set the stage for a long overdue reunification in Israel between contemporary Christians and Jews.
In the short term, Father Naddaf's decision has polarized the Christian community, a large part of which has aligned itself with the Arab-Palestinian narrative -- a narrative engineered by forces behind Yasser Arafat in the 1960s -- and designed to obliterate Israel as a Jewish nation.
In the long term, however, Father Naddaf's decision could facilitate an opportunity for Christians to focus on the value of Israel as its most important friend and partner. Naddaf's journey has the potential to model the way in which Israeli Christians relate to each other, to their homeland and to their Jewish neighbors.
Perhaps by announcing his support of Israel and by boldly acknowledging Christianity's roots in Judaism, Naddaf took one small step towards decoupling contemporary Israeli Christians from their current misplaced identity of themselves as "Arabs," as "Palestinians," and as a kind of fifth column within Israel.
As a Times of Israel article by Mitch Ginsburg asserts:
"Naddaf wants to carve out a new identity and a separate community. He believes that in the coming years he can rally 50,000 Arabic-speaking Christians in Israel to align themselves with the Jewish people and with Israel.
The first order of business on the path toward that new identity, he said, was 'breaking the fear' that has gripped the community. He likened the Arabic-speaking Christians in Israel, the minority of the minority, to the Jews of the Diaspora: good grades, pretty good jobs, few troubles. 'Christian Arabs are hostages,' he said, adding, 'the only time they feel free to identify as Christians is when they are castigating me.'
How Christians in the region began to identify as Arabs is a complex puzzle; Christian history from 30 CE until the Siege of Jerusalem in 637 CE was not Arabic at all, but rather Jewish and Roman.
Early Christian anti-Semitism, evidenced as early as the second century CE, certainly played a large part in separating Christians from their Jewish roots. Another wedge was the seventh century invasion of the region by Arab Islamic armies, which turned the region into an Islamic colonialist stronghold where Christians lived largely as dhimmis (second class, "tolerated" citizens who had to follow a humiliating set of laws and buy protection) until the collapse of the Ottoman Empire in 1916 and the end of World War I.
Father Gabriel Naddaf is now at the forefront of what one side sees as a hopeful unity movement and what others loudly decry as a political plot to fragment the Arab-Palestinian political cause.
Chapter one of this story began when Father Gabriel Naddaf, then a newly appointed priest of Greek Orthodox Church, started to speak up for the idea that it was time for Christians to embrace their homeland, Israel, and their Jewish roots. At the time, the Patriarch of the Greek Orthodox Church, Iranaeus, rejected the idea as too controversial.
Mitch Ginsberg's article points out how unique and extraordinary is Naddaf's decision:
"[A]n Arabic-speaking Christian clergyman, Father Gabriel Naddaf, a Greek Orthodox priest, has done the unthinkable: He has issued a call for Christian Arab citizens of Israel to reassess their Arab identity and to consider themselves indigenous Christians, of Greek and Aramaic origin, inextricably linked to the Jewish people and the Old Testament, and to fortify that bond by serving in the Israeli army."
Chapter two launches the remake of an identity. It starts in 2007 when a member of the Maronite Christian Church from the Northern Israeli town of Jish (Gush Halav), IDF Captain (res.) Shadi Khalloul met with soon-to-be member of Knesset (MK) Yariv Levin. Out of that meeting came a new term from an ancient saga -- Arameans. It also became a cause of interest for Levin, who, when elected MK in 2009, began to advocate on behalf of Israeli-Arameans.
Arameans, considered by historians a lost civilization, are of Semitic origin. The Aramaic language -- a language similar to Hebrew -- was a common trade language throughout a large swath of the Middle East during the Second Temple period. Jesus and his Apostles spoke the Aramaic language, which, at least until recently, was still spoken in towns throughout Syria -- long after its ethnic origins had disappeared.
The term "Aramean" has not yet caught on with the news media which continues to call the Christians in the Middle East "Christian Arabs" -- a confusing term, in part because "Christians" from many different streams of Christianity, and "Muslim Arabs" have been thrown into the same convenient pot.

Typically, and for reasons that can only be speculated on -- the Catholic and Eastern Orthodox denominational streams have aligned themselves with the Palestinian-Arab and Muslim politico-religious agendas. Similarly, some Protestant denominations, which have aligned themselves with Palestinian Arabs, have joined the chorus against Israel.
Father Naddaf's ideas run counter to some Christian theologies today that seem less religious than politically motivated. Christian "Palestinianism," for example, is a manipulative and erroneous theology linking Jesus with the Palestinian Arab political cause.
It is not too surprising that the Palestinian Authority (PA) has jumped on this bandwagon citing the "Palestinian Jesus" narrative as a rallying cry for its cause, but submitting to a radical Islamic replacement theology would negate archeology and history, as well as Christianity.
In a 2015 article for Breaking Israel News, Ahuva Belofsky writes:
"In response to repeated statements by Palestinian Authority (PA) officials that Jesus was a Palestinian, Israeli Christian leader Father Gabriel Naddaf denounced the claims. 'On what authority does President Abbas claim that Jesus was a Palestinian?' Naddaf wrote. 'The Bible says that He was born in the Jewish city of Bethlehem to Jewish parents from the city of Nazareth and was circumcised on the 8th day as a Jew and presented to the Jewish Temple by His parents according to the Mosaic law.'"
Chapter three captures Father Naddaf's sense of destiny for Christians hand-in-hand with Israel as a Jewish State. A day came when Naddaf realized that he did not identify at all with the epithet "Arab Christian" and that it neither applies to him nor to his Greek Orthodox followers. "We have a joint fate in this land [Israel], because whatever happens to the Jews here will happen to us," he asserted in a recent statement.
Since those early days, he has been working continuously to differentiate himself from the "Arab" label attached him by the media, by religious tradition and until recently by the Israeli government, which has now formally recognized Aramean as an official "minority group" eligible to receive benefits from the Israeli government.
Naddaf's work to enlist Christian youths into the IDF started quietly at first. In 2014 the Jerusalem Post reported that the IDF, which does not require Christians or Muslims to serve, began to send official enlistment notices to Christian youths of military age, inviting them voluntarily to enlist for duty.
From an inconspicuous start, now more than 100 Christian youths each year are volunteering to serve, and Naddaf believes the number will increase rapidly. Through the IDF, Christians will be able to assimilate more easily into Israeli society.
However, life for a visionary is never easy. According to Ginsburg in his 2014 article in Times of Israel:
"He knows that his life is in danger. He has been called a traitor. His car tires have been slashed; bloody rags have been left outside his apartment building. He is regularly threatened over the telephone and, last year, his son was attacked outside his home by a youth wielding an iron club."
News reports do not make it clear who the attackers are, but a billboard near his church in Nazareth, put up after his son was attacked, leaves little doubt:
The Israeli government has unfortunately been slow to prosecute the perpetrators of these attacks; evidently there are few fingerprints. But Naddaf is committed to this path, even while others of his friends and allies have abandoned the project due to threats from the religious hierarchy and elsewhere.
Many theologians, both Jewish and Christian, identify Israel as the center of God's world -- the "apple of God's eye," it says in Zechariah 2:8. But there are many Christians for whom the Bible is less an "authoritative" historical document and more a book of poetry or inspiration.
There are also those Christian groups (some say a majority) who follow "replacement theologies," which have written off Israel altogether. This widespread but erroneous version of Christianity transfers the covenant promises God made with Israel to the Christian Church.
In a similar vein, a common Muslim narrative says that Islam replaces both Christianity and Judaism. There are many in the Muslim world intent on rewriting the history of the Middle East; they have vowed to blot out the name of Israel and the Jews altogether.
In some circles, these two groups have been in collaboration with each other. As we have been seeing recently in Nigeria, Syria and Iraq, after the Jews are targeted, the Christians are targeted next: "First the Saturday people, then the Sunday people, " goes the saying in the Middle East.
Father Naddaf, by contrast, has been providing leadership to unite Christians and Jews. A rapidly increasing number of Christians see him as offering them the opportunity to envision and build a tremendous future.
Originally published at Gatestone Institute - reposted with permission