A Sign Of The Times? Unprecedented Fires Have Turned Skies Blood Red 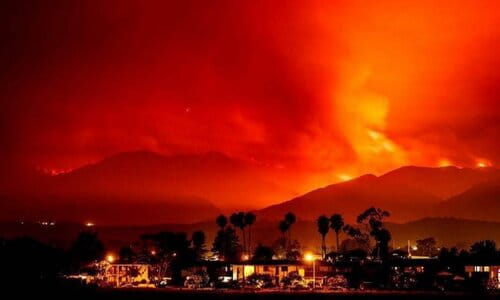 By Michael Snyder/Economic Collapse Blog September 11, 2020
Share this article:
2020 has been an incredibly difficult year for the U.S. as a whole, but no part of thecountry has been hit harder than the states along the west coast.  It has just been one thing after another all year long, and now unprecedented wildfires have turned the skies bright orange and blood red over vast stretches of California and Oregon.
Many are using the word "apocalyptic" to describe what is happening, and others have said that the skies look like something out of a science fiction movie.  And even though hundreds of thousands of acres have already burned in Oregon and Washington, and even though more than two million acres have already burned in California, officials are warning that conditions will get even worse as we head into "the teeth of the wildfire season".
I can't remember a time when skies have turned completely red for an extended period of time in the state of Oregon, but that is precisely what we witnessed on Wednesday.  The following comes from an article entitled "Skies turn blood-red above Oregon in apocalyptic scenes from wildfire-ravaged state"...
Journalist Christine Pitawanich from KGW 8 is heard explaining in the video: "This, right here, is downtown Stayton.
"You can see the red hue, the red-orange glow in the sky. There is ash, falling visibly in front of the headlights of the car.
"But downtown, basically, empty here beside a few people walking around.
Can you imagine the panic that people living in that part of Oregon must be feeling right now?

According to Governor Kate Brown, these red skies are being caused by an "unprecedented" fire event...
Oregon Governor Kate Brown said the incident is "proving to be an unprecedented and significant fire event for our state".
So far, an estimated 200,000 acres of land has been scorched.
Of course California has been dealing with "unprecedented" fire events for a few weeks now, and on Wednesday morning residents of San Francisco awoke to find that the skies above their city had turned "a pumpkin orange color"...
Just when Bay Area residents thought the world outside couldn't get stranger, the sky Wednesday dimly glowed a pumpkin orange color you'd expect to see on Mars.
With wildfire smoke high aloft in the atmosphere, the sky was a sickly yellow on Tuesday, but today a thicker blanket of toxic air is traveling overhead and the color turned an even stranger, richer hue.
And just like in Oregon, ash from nearby wildfires is falling in large quantities.
In fact, it is being reported that at one point so much ash was falling in the Bay Area that "it looked like moderate to heavy snow"...
In some spots the sooty air reached the ground, and National Weather Service forecaster Roger Gass said a weather spotter saw falling ash at Buchanan Field Airport in Concord.
"They reported a significant amount of ash," said Gass. "Almost to the point where it looked like moderate to heavy snow."

This has already been the worst wildfire season in the history of the state of California, and we haven't even gotten to the heart of wildfire season yet.
More than two million acres have already been burned, and normally October and November are the worst months for wildfires in the state.
Extreme heat and a bitter drought combined to create ideal conditions for wildfires to break out, and California Governor Gavin Newsom says that there were "14,000 lightning strikes" during one recent 24 hour period...
California Governor Gavin Newsom said this was the "largest fire season we've had in recent recorded history" as he declared a state of emergency.
He blamed the cause of the fires on "unprecedented temperatures, a heat dome, 14,000 lightning strikes over a 24-hour period and 150 million-plus dead trees related to a multi-year drought".
I know that California is a huge state, but 14,000 lightning strikes in one 24 hour period seems really, really extreme to me.
I am sure that officials have a "rational explanation" for why so many lightning strikes are happening, but could it be possible that what is happening goes beyond our usual rational explanations?
What we do know is that literally dozens of fires are being started every day in California, and firefighters are really scrambling to try to contain them...
"Just yesterday there were 43 new fires. The day before that, 49 fires," Berlant said. "When a fire ignites right now ... they are able to burn at explosive rates. But firefighters have done an amazing job at being able to contain most of these fires that are igniting."

I have a really hard time imagining that this fire season could get even worse in the state, but that is what officials are telling us.  In fact, the phrase "much worse" is being used to describe what is potentially ahead...
California's record-breaking fire season could get much worse in the coming days as powerful winds heighten the danger of more blazes while firefighters continue to struggle with destructive conflagrations across the state.
Intense Diablo winds are forecast for parts of Northern California this week, with Pacific Gas & Electric Co. saying it would shut off power to numerous communities in hopes of avoiding new fires potentially sparked by downed power lines.
If you look at a map of all the fires that are raging right now, it looks like nearly the entire state is already on fire at this moment.
So I am not exactly sure what "much worse" would look like.
In the end, this could be the final straw that motivates many people to finally leave the west coast for good.
Yes, the weather can be beautiful and traditionally there have been lots of high paying jobs out there, but the west coast is definitely not a place that you will want to be during the very challenging years that are ahead of us.
When the skies turn apocalyptic colors and ash starts falling so heavily that it reminds people of heavy snow, that is probably a sign that you should reconsider where you are currently living.
To me, 2020 has been a year that has been filled with warnings, but unfortunately I don't think that most people are listening yet.
Originally published at The Economic Collapse Blog - reposted with permission.