Even 9/11 Memorials Not Spared By BLM Vandalism On Anniversary 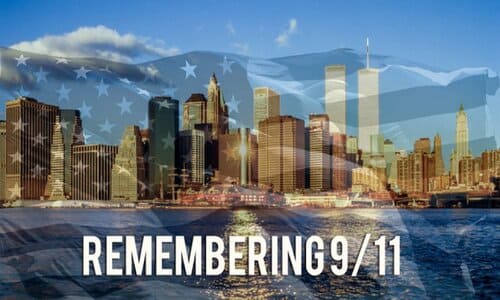 By Daniel Greenfield/JNS.org September 14, 2020
Share this article:
The 19th anniversary of 9/11 has been the nation's darkest in this dreaded cycle.
The Black Lives Matter (BLM) riots that attacked the statues of George Washington, Thomas Jefferson, Christopher Columbus and Abraham Lincoln did not spare 9/11 memorials.
The statue of a police officer was beheaded and toppled in Plymouth, Mass. at a 9/11 memorial honoring those who had died in the attacks. But the 2,000 pound steel beam from the World Trade Center proved beyond the ability of the vandals to topple.
When BLM racists defaced statues and memorials in the Boston Common, including the "Glory" regiment, they didn't spare the 9/11 memorial in the Public Garden.
A 9/11 memorial honoring five fallen firefighters was defaced and the American flagpole was cut down in Washingtonville, N.Y. There was also vandalism at the Decatur, Ill. memorial site, and a red, white and blue rearing horse 9/11 memorial in Rochester, N.Y. was smeared with red paint.

Beyond the radical attacks on the monuments of September 11 were the attacks on its heroes.
The NYPD has suffered its worst days since 9/11, with over 400 officers injured in the BLM riots. Police and firefighters went from the heroes of a nation to being smeared as soulless monsters.
"I could see no difference between the officer who killed and the police who died, or the firefighters who died," wrote Ta-Nehisi Coates, an intellectual godfather of BLM. "They were not human to me. Black, white, or whatever, they were the menaces of nature; they were the fire, the comet, the storm, which could--with no justification--shatter my body."
"Between the World and Me," the hateful tract in which Coates dehumanized the police officers and firefighters who had died trying to save people of all races and creeds, became a bestseller, was a Pulitzer finalist and has repeatedly shown up on corporate anti-racism reading lists.
All of this makes commemorating Sept. 11 into an awkward task that Democrats avoid.
The 9/11 Memorial & Museum tried to cancel the Tribute in Light, whose beams that fill the night sky are used to light the space of the fallen towers of the World Trade Center, and the reading of the names of the fallen dead by 9/11 family members. It took an outpouring of anger from family members and alternative events by Tunnel2Towers to get the museum to reverse course.
While the leadership of the mismanaged museum blamed the pandemic for their decision, local Democrats had long viewed the ceremonies as intolerant and out of touch with their agenda.
Last year, Nicholas Haros Jr., the son of a 9/11 victim, blasted Rep. Ilhan Omar's minimization of the attack on America at the reading of the names, while wearing a T-shirt decorated with her comments minimizing the Islamic atrocity: "I was attacked, your relatives and friends were attacked, our constitutional freedoms were attacked and our nation's founding on Judeo-Christian principles were attacked. That's what some people did."
Meanwhile, the Tribute in Light had been decried as a symbol of "extreme nationalism."
There had always been a deep discomfort with the patriotism of Sept. 11 and with its heroes and victims. The former were mostly working class white men from the bridge and tunnel crowd, and the latter were mostly white middle class men and women, many from outside the city and state, who were also insufficiently diverse and representative of the "New America."
Even early on there had been efforts to replace the firefighters raising the flag at Ground Zero with a more diverse group in an official memorial. In the long years after the men of the NYPD and the FDNY had raised up the courage of a nation, both organizations, like the military, have been gutted by political correctness, and have turned into shadows of their former selves.
The FDNY has a diversity monitor who has cost the organization $23 million, and a top diversity official who was sued for excluding one of the firefighters who raised the flag at Ground Zero from a color guard ceremony.

Nicholas Garaufis, a Clinton judge, and Mayor Bill de Blasio imposed their vision of diversity on the FDNY to ensure that "the racial, ethnic and gender demographics of the department's firefighters reflect that of the city's population as a whole" along with the "full integration of a mixed-gender workforce."
But the heroism of the FDNY and NYPD on Sept. 11 came from the fact that its men did not reflect a random sampling of the city's population. They were extraordinary men, heroes who went where no one else would dare, climbing 100 stories in the hope of saving someone.
If Islamic terrorists were to fly planes into the Freedom Tower today, there would be fewer members of the FDNY's mixed-gender and fully diverse workforce who would climb 100 stories with 60 pounds of gear on their backs while a skyscraper was tottering and burning on all sides.
On 9/11, firefighters around the country commemorated their heroism by climbing 110 stories.
That's the traditional kind of heroism. It's out of step with the millennial ethos of performative hysteria spread virally across social media which turns victimhood into celebrity. The men who lived and died on that day were not victims and they were not trying to get famous. They did their duty. But to many the concept of duty has become as alien as frock coats and top hats.
Nineteen years after 9/11, men and women born after the attack will be able to vote.
The politics of the present are being formed by radicals who, like Rep. Alexandria Ocasio-Cortez, 11 years old at the time, were children on Sept. 11. The meaning of the day is as incomprehensible to them and as distant as Pearl Harbor.
The Obama administration had tried to shift the meaning of Sept. 11 away from heroism to volunteerism. Its idea of commemorating the attack on America was cleaning up parks. As time goes by, there will be no need to actively suppress the commemorations, they'll be irrelevant.
If we let it happen.
History is made up not only of dry facts, but emotional connections. The stories that define us are the ones that matter because they endow life with meaning. For millions of Americans, the death of an ex-con who had robbed a pregnant woman at gunpoint gave their lives meaning. That's why so much of the country is burning and so many of its memorials have fallen.
The Islamic terrorists who attacked us on Sept. 11 had beliefs that gave their lives meaning. So did the SS soldiers who marched through Poland, or their NKVD counterparts.
It is not the mere presence of evil that creates a crisis, but the absence of meaningful opposition to it. And meaningful opposition comes from a deep moral passion without which life is empty.
The 19 hijackers lied to the passengers that if they didn't resist, they would be allowed to live.
Mohammed Atta told Flight 11 passengers, "Nobody move. Everything will be okay. If you try to make any moves, you'll endanger yourself and the airplane. Just stay quiet."
It worked three times. And then when Americans realized what was at stake, it stopped working.
Atta and his band of jihadist butchers understood that what normal Americans wanted was to be comfortable and safe. They wanted to recline in their seats, plug in their headphones and wait out the interminable time they would spend in a tin can in the sky.
"Take prisoners and kill them. As Allah said: 'No prophet should have prisoners until he has soaked the land with blood,'" Atta told his men.
"Just stay quiet, and you'll be okay," he lied to the infidel hostages.
The leftist radicals who have been in league with Islamic terrorists, defending them in court, propagandizing for their "civil rights" in the press and funding their networks, now call themselves "woke." Another Sept. 11 anniversary reminds us that we need to wake up.

In our streets, the radicals chant "Death to America," they burn flags, desecrate churches and synagogues and topple the statues of the nation's founders. And their media allies and Democrat apparatchiks tell us to go along with it and we'll be okay. The rioters and stabbers just want to issue their demands and make their point. If we stay quiet, they'll leave us alone.
The 19th anniversary is another warning from the bloody echoes of history that they won't.
When the jihadis and BLMers chant "Death to America," believe that they mean it.
The enemies of our nation are also the foes of our history. They don't just want to topple Washington, Jefferson, Lincoln and every historical figure who wasn't up to date with contemporary woke views on, in the words of a D.C. commission calling for the removal of the Washington Monument and Jefferson Memorial, "age, religion, sexual orientation, gender identity." No, they want to be rid of the courage and heroism of our entire history because they know that the power of Americans to resist their brutality and hate comes from our history.
That includes Sept. 11.
On a cool fall day, millions of Americans woke out of a hazy dream of the end of history and remembered that we were a nation, not a borderless global order, that we needed heroes, not diversity, that history wasn't over, that we still had enemies, and that what mattered was not the color of your skin or your politically correct virtue signaling, but whether you would rush the cockpit or sit in your seat hoping that despite everything you knew, they wouldn't kill you.
On the 19th anniversary of that cool fall day, we are passing through fire and havoc, flying over ruined cities and fallen rubble because too many of us had fallen asleep until the guttural voice came on again reading its hateful demands. And many of our fellow passengers kneeled while the anthem played, they disgraced their country, and the memory of our fallen dead.
Many others woke up.
An anniversary only matters as much as it brings meaning and purpose into our lives.
No amount of wishing or willing can raise the dead of Sept. 11 out of their ashen graves. All we can do this anniversary, and every one after it, is to keep resisting the terrorists, domestic and international, to stay awake and ready in the long flight of history.
We must remember our heroes and honor their valor, because we may need to imitate it.
Originally published at JNS.org - reposted with permission.