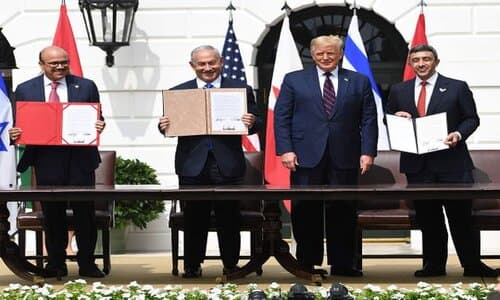 By Alex Traiman/JNS.org September 16, 2020
Share this article:
The signing of normalization agreements between Israel and Muslim-majority Sunni Gulf States the United Arab Emirates and Bahrain represents the end of an era of pan-Arab belligerence towards the Jewish state, and the formal acknowledgment that it is a permanent fixture in the Middle East.
Before boarding a plane to attend the historic signings at the White House, Israeli Prime Minister Benjamin Netanyahu stated, "This is a new era of peace, for which I've worked for 25 years. These agreements will be a fusion of diplomatic and economic peace and will bring in billions of dollars to the Israeli economy."
According to Netanyahu's strategic advisor Aaron Klein, "for too many years, regional peace has been stalled by the tried and failed paradigm of Israeli territorial concessions in exchange for promises of peace."
"Now we have peace from strength between Gulf states and an Israel that under Netanyahu has become an even greater global economic and military powerhouse," he told JNS.
The Netanyahu Doctrine
For Israel's longest-serving prime minister, these accords represent the intersection of multiple parallel strategic initiatives in the realms of economics, diplomacy and security.
Klein says this merger represents "the culmination of the Netanyahu Doctrine, which can be summarized as peace in exchange for peace and peace from a position of strength."
Netanyahu has successfully pivoted Israel's economy from a resource-poor developing nation with socialist principles into a bustling free market that now operates at a dramatic trade surplus. GDP has grown exponentially, and a small country with less than 10 million citizens has grown into a top 10 global economy.

With dramatically increased tax revenues, the Israel Defense Forces has acquired the world's best military hardware and developed the world's most advanced missile-defense systems. Much of this equipment has been purchased with critical military assistance from Israel's greatest ally, the United States.
And while Netanyahu has been averse to starting or escalating conflicts, Israel is no paper tiger. Israel routinely strikes its enemies wherever they may be operating via traditional military and covert operations. The country has similarly emerged as a world leader in military intelligence and cybersecurity. Enemies and neighbors recognize that Israel is the region's superior military superpower.
Jewish state vs. Islamic Republic
Even more critical to Israel's emergence as a regional power has been the Jewish state's standing up to the Middle East's most malign actors, in particular: Iran. Netanyahu's insistence that Iran never acquires nuclear weapons has flipped the balance of power in the Middle East.
"The seeds for today's historic deals were planted by Prime Minister Benjamin Netanyahu's unrelenting campaign to stop Iran from obtaining nuclear weapons," says Klein.
One of the key elements in establishing Israel's position was a trip by Netanyahu to Washington in early 2015, where he addressed a joint session of Congress to warn about the dangers of the proposed nuclear deal being discussed with Iran.
And while that address placed further strain between Netanyahu and former President Barack Obama--and failed to prevent America from signing on to the Joint Comprehensive Plan of Action, or JCPOA--the address sent a powerful message to Iran's regional opponents that Israel could be counted to counter Iranian nuclear ambitions.

"It was precisely Netanyahu's heroic actions to isolate Iran for more than a decade that shifted the Gulf nations' attitudes towards Israel," says Klein, noting that the prime minister's actions have not always been popular. This staunch opposition is "something Netanyahu at times did totally alone, even among other politicians here in Israel."
Netanyahu's opposition has not only been rhetorical. Israel has consistently acted to reduce Iranian presence in Syria and to strike hard against illicit Iranian weapons transfers. Furthermore, Israel is widely believed to have engaged in numerous covert actions to hinder Iran's nuclear-weapons program.
The scope of Israeli penetration deep into Iranian nuclear infrastructure was revealed in the Mossad's stunning secret raid of Iran's nuclear archives in 2018.
Netanyahu's actions demonstrated strength that resonated with Obama's successor, President Donald Trump. The prime minister's lobbying played a significant role in Trump's decision to withdraw from the JCPOA and reinstate harsh economic sanctions on the Islamic Republic.
"The UAE, Bahrain and other Gulf States must know that if it weren't for Netanyahu's heroic leadership, then Iran would already likely possess nuclear weapons," says Klein. "And if Netanyahu didn't repeatedly act, Iran would have a much larger terrorist footprint throughout the region.
'Peace to Prosperity'
Now the trust that Netanyahu has built with Trump and his senior advisor, Jared Kushner, are reaping further dividends. The prime minister successfully convinced the administration to recalibrate peace efforts in the Middle East--from the failed land for peace paradigms of the Oslo Accords.
Klein says "the peace deals with the UAE and Bahrain were fueled by President Trump's revolutionary 'Peace to Prosperity' plan, the most realistic formula for Mideast peace."
A tenet of the Netanyahu doctrine has always been that the Israeli-Palestinian conflict is not the source of all or even most of the problems in the Middle East. He has consistently worked to reverse the notion that greater peace in the region can only come from ending the Israeli-Palestinian conflict.

"Gulf nations continue to nudge the Palestinians to change their ways, but the UAE and Bahrain--and hopefully, many others--won't wait around any longer," says Klein. "These countries are ready to advance a regional normalization and peace anchored in the best interests of every forward-leaning nation that opposes the regional extremism propagated by Iran."
Netanyahu has repeatedly insisted that peace will come from the outside in; that generating peace between Israel and its other Arab neighbors will dramatically increase the prospects for a peaceful resolution between Israelis and Palestinians.
Palestinian rejectionism
The signing of the Abraham Accords may ultimately lead to peace with Palestinians if they decide to follow their Sunni brethren in recognizing that the Jewish state is in the Middle East to stay. Israelis, says Klein, are ready to make progress on the Israeli-Palestinian conflict.
"The Trump plan was immediately accepted by Israel as a basis for talks," says Klein, "while the Palestinians rejected out of hand a plan that would have given them a much better life and put their economy on steroids."
Palestinians, meanwhile, who have for years been convincing nations to boycott the Jewish state, may recognize that these efforts have failed to stop Israel's economic and diplomatic progress, while they themselves continue to regress.
The Abraham Accords "deal a decisive blow to the illegitimate, anti-Semitic boycott movement singling out the world's only Jewish state," says Klein.
Mutual interests and moral clarity
Klein insists that the era of peace that is being ushered in will be genuine, as it is solidly rooted in "mutual interests," including immediate ones.
"It's clear that we are seeing a warm peace between nations that truly want a relationship with Israel," says Klein, who notes that Gulf states seek cooperation "in the fields of economy, security, technology, energy, health care, culture, the environment and fighting coronavirus, among other areas."
Credit must go to the forward-thinking leaders of the Persian Gulf states, who could just have easily remain entrenched in what are quickly becoming outdated anti-Israel positions. The accords "demonstrate the strong leadership and moral clarity of the leaders of the UAE and Bahrain," says Klein.
Working in sync with a friendly United States administration to isolate Iran, hold the Palestinians accountable for decades of rejectionism and enhance diplomatic relations with nations that once refused formal diplomatic ties is now bearing fruit.
Klein notes that peace between Israel the United Arab Emirates and Bahrain would not be possible without the American president. "Today, we are witnessing the results of President Trump's bold leadership actions."
Children of Abraham
Tuesday's White House signing being Jewish and Muslim nations is a paradigm shift of biblical proportions. Klein similarly suggests that by continuing on the path of peace, more formerly unthinkable achievements are likely on the way.
"Prime Minister Netanyahu and the U.S. administration have repeatedly expressed confidence that more peace deals with Arab nations will follow," says Klein, adding that "Netanyahu already previously made advancements in relations with such countries as Sudan, Oman and other nations in the Gulf."
He points to the recent "Saudi decision to open the country's airspace to Israeli flights," as a hint of what may yet be to come.
"It's clear the Mideast peace train has left the station," says Klein, "and we are ushering in a new era of peace between Israel and the other children of Abraham."
Originally published at JNS.org - reposted with permission.