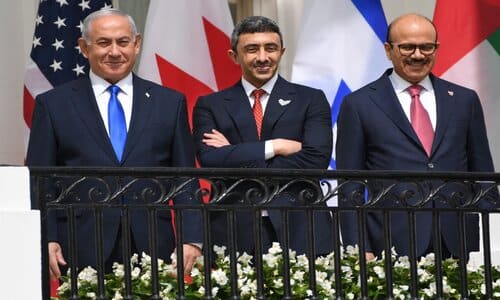 By
Share this article:
Attending the White House signing ceremony on Tuesday of the Abraham Accords--which normalize relations between Israel and the United Arab Emirates and Bahrain--was both moving and jarring. Standing at the South Lawn, just meters from the Rose Garden where the Oslo Accords were signed 27 years ago on Sept. 13, 1993, the comparison between the two agreements was inescapable.
That ceremony was an act of political theater unsurpassed in the history of Israel. Yasser Arafat, chairman of the PLO and architect of modern terrorism, grinned ear to ear as he received the royal treatment on the White House Lawn.

Seeking peace, Israel's then-Prime Minister Yitzhak Rabin promised the PLO land, money and weaponry, which Arafat used to build a terror state on the outskirts of Jerusalem. Arafat in turn promised to end terrorism, accept Israel's right to exist and resolve all outstanding issues through peaceful negotiations. Arafat was lying.
A no deposit bonus casino can provide a free bonus which you can use to play and win in real money games. The only requirement is that you make a casino account to claim the offer. This is not like free instant play games, where you can play for free but cannot win any real cash.
I wanted to believe in the fake peace of 1993. But the grim facts made it all impossible. For the past 27 years, first as a member of Israel's negotiating team during my service in the Israel Defense Forces and then as a writer and a lecturer, like thousands of other Israelis and friends of Israel in the United States and around the world, I devoted myself to exposing the lies and warning about the danger of empowering those who seek Israel's destruction. I wrote hundreds of articles, briefed hundreds of politicians and community leaders in the United States and worldwide. I wrote a book.
And as I sat in the garden at the White House today, with Israeli Prime Minister Benjamin Netanyahu, U.S. President Donald Trump, UAE Foreign Minister Sheikh Abdullah bin Zayed Al Nahyan and Bahrain Foreign Minister Abdullatif Al Zayani standing in the portico before me, the names of the victims of that previous peace agreement rushed through my head. David Biri, Nachson Waxman, Kochava Biton, Ohad Bachrach, Ori Shachor, the Lapids, the Ungars, the Fogels, the Schijveschuurders, Madhat Yusuf, Shalhevet Pas and on and on and on.

I have been demonized as an "extremist," a "far right-winger," an "enemy of peace" and a "fascist" by members of the so-called "peace camp." Think tanks and professionals with ties to the European Union--the co-sponsor of the fake peace process--were afraid to invite me to speak, cite my articles or to review my book.
Now, 27 years and two days later, the Palestinians were outside the White House with Israeli "peace activists" protesting the peace ceremony at the White House. The European Union is boycotting the peace ceremony.
And sitting in the audience with me are politicians and leaders like Zionist Organization of American President Mort Klein; Sen. Ted Cruz; radio host Mark Levin and former presidential candidate and evangelical leader Gary Bauer, whom I met with over over the past decades to discuss the dangers of fake peace to Israel, and who like me devoted themselves to ending the lie that peace is possible with people who justify the murder of innocent Israelis as a form of "legitimate resistance," only to be reviled by the "peace camp" for speaking the truth.
Many of the guests made the effort to come to the White House even in the midst of the global pandemic because it is clear that this peace is something else. As people like Mossad director Yossi Cohen have said, it only seems like this event happened suddenly. It didn't. It is the outgrowth of years of work by dedicated officials from all sides who quietly and carefully cultivated ties based not on lies but on real common interests and common concerns.

The UAE, Bahrain and Israel have come together because of the courageous leadership of President Trump and his advisers who were willing to acknowledge the reality on the ground and listen to the voices of those who opposed what happened at the White House 27 years ago.
Trump and his team were willing to break ranks with generations of American policymakers who insisted that terrorists are the true peacemakers, that the road to peace is appeasement and that those who look for mutual respect, human decency and shared interests as the basis of peace are right-wing warmongers.
This peace is not a function of Netanyahu changing his tune, as his Likud predecessors Ariel Sharon, Ehud Olmert and others did, and joining the chorus of the fake peace camp. This peace owes to Netanyahu staying true to the core truths at the root of the anti-Oslo protests: You cannot make peace with people who justify your murder and seek your destruction. You can only make peace with those who accept you as you are for what you are.
This peace is real peace. It is a peace to celebrate and cultivate. It is a peace based on respecting, and missing and loving and never forgetting the victims of the political theater that happened here 27 years ago.
Where this peace will lead is unclear. The sky's the limit. But unless something goes terribly wrong, it will not lead to more Jewish victims of fake peace.