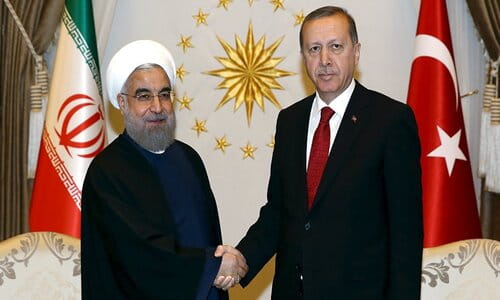 By Maya Carlin/JNS.org September 17, 2020
Share this article:
In a video conference on Tuesday, Turkish President Recep Tayyip Erdoğan and Iranian President Hassan Rouhani pledged to target Kurdish forces in joint military operations.
Both countries agreed that the Kurdistan Worker's Party (PKK) and other affiliated Kurdish groups in the region pose a significant threat to the security of Tehran and Ankara. Turkey has been fighting Kurdish rebellions since the early 20th century, long before the 1984 establishment of the PKK.
In the last year, however, Ankara has significantly increased its foothold in northern Iraq and has waged more frequent operations against Kurdish targets.

In June, in a set of joint operations with Iran, Turkey carried out various air and land operations targeting more than 150 suspected PKK member positions. Two days later, Iran's Islamic Revolutionary Guards Corps (IRGC) began shelling suspected targets in the Iraqi province of Erbil close to the Iraq-Iran border.
Although Iran and Turkey have corroborated more recently, the two authoritarian-led states often find themselves on conflicting sides of regional clashes. In Syria, for example, Iran and Russia remain the leading foreign supports of Syrian President Bashar Assad's forces, while Ankara supports opposition fighters, including some radical elements.
Turkish forces are responsible for the killings of dozens of Iranian-back militia members earlier this year in Idlib. In March, Ankara accused two Iranian intelligence officers of murdering dissident Masoud Mlavi Vardanjani in late 2019.
Despite these glaring areas of contention, Turkey and Iran are currently emboldening their partnership. In late August, a Hamas leadership delegation met with Erdoğan in Istanbul. Hamas, a U.S- designated terrorist organization largely funded by Iran, violently seized control of the Gaza Strip in 2007.

On Monday, the Hamas representative in Tehran, Khaled Al-Qaddoumi, announced the need for a strengthened alliance between Turkey, Iran and Qatar. Al-Qaddoumi reiterated that he hopes the three countries "move towards more proper and strategic steps in favor of the unity of the Muslim Ummah and facing the common enemy."
On Wednesday, the Arab League member states gathered and officially condemned Ankara and Tehran's interference in Arab countries. The Secretary General of the Arab League, Ahmed Abu Al Ghait, emphasized Iran and Turkey's "growing bullying and hostility" across the region and stressed the need for a unified Arab front to counter their mounting aggressions. Member states pointed to the Turkish-Iranian joint attacks in northern Iraq, denouncing them as violations of international laws and sovereignty of states.
A similar denouncement was made in late August during a summit between Iraq, Jordan and Egypt. This highly touted gathering focused on improving ties among the three countries and supporting Baghdad's newly instated Prime Minister, Mustafa Al-Kadhimi, in his mission to limit foreign intervention in his country. This potential new alliance would severely limit Iran's malign influence in the region, especially if it were to expand to the Gulf and include Saudi Arabia.

Iranian regime officials are aware that a strong opposition alliance would hinder their regional efforts and limit their ability to infiltrate sovereign neighbors. Similarly, Turkey has been testing its fellow NATO member, Greece, along with Cyprus, Egypt and the United Arab Emirates with aggressive threats in recent months.
Erdoğan and Iranian President Hassan Rouhani understand that in order for them to continue on the path of violating international law and rules of sovereignty, they must unite and counter those who threaten these ambitions.
Originally published at JNS.org - reposted with permission.