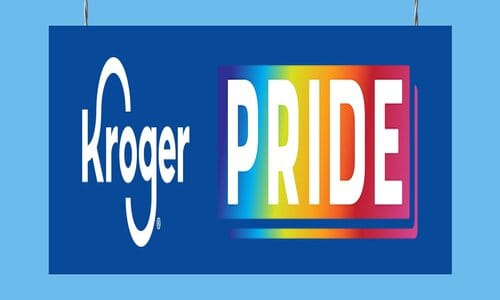 By Tony Perkins/Family Research Council September 25, 2020
Share this article:
The Equal Employment Opportunity Commission (EEOC) is a quasi-independent federal agency charged with enforcing federal employment discrimination laws. On September 15, the EEOC filed suit against the Kroger Company, charging that it violated Title VII of the Civil Rights Act of 1964.
In this case, the Kroger grocery store in Conway, Arkansas issued new aprons to employees that featured a small, rainbow-colored heart emblem. Two employees perceived this as an endorsement of the LGBT movement, and they object[Advertisement]ed on religious grounds.
Both of the defendants in the case, 57-year-old Trudy Rickert and 72-year-old Brenda Lawson, believe "in the literal interpretation of the Bible" and hold "a sincerely held religious belief that homosexuality is a sin."

"I have a sincerely held religious belief that I cannot wear a symbol that promotes or endorses something that is in violation of my religious faith," Rickerd told management in a signed hand-written letter according to the lawsuit. "I respect others who have a different opinion and am happy to work alongside others who desire to wear the symbol. I am happy to buy another apron to ensure there is no financial hardship on Kroger."
Rickerd and Lawson claim that instead of granting their requests, they were disciplined multiple times.
According to the lawsuit, Rickerd was fired May 29, 2019, and Lawson was fired June 1, 2019 for repeated violations of the dress code.
Despite firing Rickerd and Lawson for their objections to the dress code on religious grounds, the lawsuit claims other employees were accommodated.
"Defendant Employer did not discharge other employees in the workplace who did not request a religious accommodation but who simply declined to wear the new apron or who covered the heart logo," the lawsuit says.

Sharon Fast Gustafson, General Counsel of the EEOC, explained on yesterday's Washington Watch radio program that religion is a protected category in the Civil Rights Act, like race or sex, but with an added twist.
"If the applicant or employee has a religious belief or practice that requires some kind of religious accommodation, the law requires the employer to give that accommodation to the employee unless it would present some sort of undue hardship to the business."
The two Kroger employees asked if they could either wear a different apron or wear their name tag over the rainbow emblem. Kroger refused this accommodation and ended up firing the two employees -- leading to the EEOC suit in support of the employees. As Gustafson pointed out, it would be hard for Kroger to claim an "undue hardship," given that "it was a zero-cost accommodation that was requested."
During the Obama administration, it would have been hard to imagine the EEOC taking the side of people with orthodox Judeo-Christian views -- especially ones who, as Gustafson put it, "had religious beliefs that homosexual acts are sins and that they could not do anything to celebrate that or to endorse it."
Under the influence of Commissioner Chai Feldblum, a self-identified lesbian radical activist appointed by President Obama, it was the EEOC that first took the position that sexual orientation and gender identity discrimination were forms of "sex" discrimination in violation of Title VII.
In fact, the EEOC was the plaintiff that sued a religiously-oriented funeral home on behalf of a transgender employee, in one of the cases that was consolidated under Bostock v. Clayton County, the outrageous 2020 Supreme Court decision that adopted the Obama EEOC's view.

Similarly, the Obama-era EEOC in 2015 asserted that a Catholic prep school was guilty of "sex" discrimination when it fired a band teacher after learning he planned to "marry" a same-sex partner. They were not as sympathetic to religious employees, however.
In 2013, a public school teacher was fired after giving a Bible to a student who requested it, and he filed a complaint with the EEOC. The agency dismissed his complaint without doing the required investigation, until First Liberty Institute put pressure on them to re-open the case.
We trust that the Kroger lawsuit means that the EEOC has taken a turn in the direction of consistent support for religious liberty.
Originally published at Family Research Council - reposted with permission.